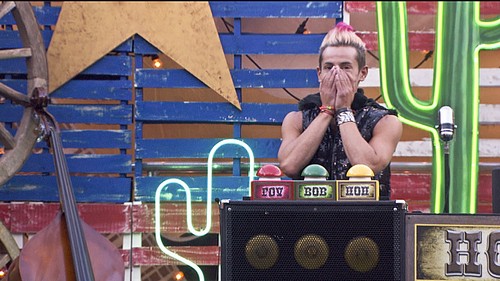 Tonight on CBS BIG BROTHER returns for an all new episode in their 16th season. On tonight’s episode the Power of Veto competition is held.

On the last episode the two new heads of households moved into their rooms and the nominations were held; Frankie nominated Jocasta and Victoria, Zach nominated Christine and Nicole. Zach told Christine that if they looked up in the Big Brother dictionary under Floater they would see a picture of Christine and former Big Brother player Jen holding hands. Zach then called Nicole a Fruit Loop Dingas. During the Battle of the Block competition, it was a wedding competition, Nicole and Christine won. Did you watch the last episode? If you missed it we have a full and detailed recap, right here for you.

On tonight’s show the house guests go against each other for the power of veto, this could make or break some of the alliances.  If you want to find out what was going to go down tonight before the show tonight, check our our nifty spoilers.

RECAP: Zach is purposely trying to aggravate people in the house and goes on the attack with the Have Nots; he is going so overboard, he goes in front of them and starts eating beef jerky and candy. Christine can’t believe that she is still in an alliance with Zach because he is a lunatic. Frankie thinks if Zach continues to piss people off he may just get himself put on the block. But, Frankie also has a mission to get two people mad at each other and the only chance is at the Veto meeting so he goads Zach on and tells him he should come up with another speech.

Derrick is called to the diary room, he reads a letter and looks very upset; his grandfather passed away. Getting news of somebody passing is never easy, but when you are inside the Big Brother house, it is even harder; the worst part, is not being there for the funeral. His family wants him to stay in the house and keep fighting to win the game for him and his family.

Caleb is mystified why Amber is ignoring him after their date. Nobody knows where Amber’s head is in the game and Caleb swears he won’t waste his time talking to her about it. Caleb is no longer the romantic guy in the house, he claims he is a beast mocowboy.

Zach and Frankie are in bed together and Zach is giving Frankie a massage, Zach says it is a shame that he is not gay. Frankie on the other hand thinks Zach is gay and is waiting for him to make a move.

Frankie calls everyone together because it is time to pick players for the Veto competition. The primary goal this week is to back door Amber, so he doesn’t want Caleb or Amber to participate. The players chosen are; Donny, Hayden (house guest choice by Victoria) and Christine.

Amber walks into the kitchen and tells Frankie she really wants the nominations to stay the same since there really is nobody else to put up.

Caleb cannot even look at Amber any more – he is so upset that she is ignoring him. Frankie tells him just to stay away from her and just concentrate on his game.

Time for the Veto competition and it is a western theme; Caleb is thrilled. The players have to rock a horse back and forth 60 times to get thirty seconds of time, then jump off and stack gold bars. But, the trick here is not to let the clock run out. Donny has a hard time and just hopes that somebody wins so the game will end. Frankie is doing really good and is in the lead so far. Jocasta ran out of time, but she can take slop for the week and get back on. Frankie has just dropped all his bars. Christine is thrilled, she seriously has a chance at this game. Hayden knows his competition is Christine and Jocasta. Hayden is giving a move on to win this thing, will he do it? Yes, Hayden is the winner!

Hayden is going to use the Veto on Victoria and the plan is still to get rid of Amber.

Amber goes into the HOH room and you can cut the tension with a knife when Caleb is there and then walks out. Cody and Zach ask what is going on, she says that Caleb is blowing everything out of proportion. Zach runs right to Caleb and tells him to stir the pot. Caleb is pissed off and thinks it is time to put this girl in line. Zach is happy about the trouble that he is causing. Caleb then goes to see Frankie and tells him that they should put Amber on the block just to teach her a lesson, but not send her home. Little does Caleb know that the plan is to get rid of Amber.

Frankie honestly doesn’t know who is more clueless this week, Caleb or Amber.

Derrick, Donny and Frankie are in the HOH room and talk about the heated argument that they are supposed create during the Veto meeting. The plan is to have Zach verbally attack Amber when she is backdoored. Donny doesn’t want to know what is exactly going to happen, he wants to be surprised.

Time for the Veto meeting, Hayden gives both nominees a chance to save themselves. Jocasta first praises God, really!!!! then tells him to use it on her. Victoria says that she is a true competitor and hopes he uses it on her. Hayden wishes he had two Vetos but he only has one, he uses it on Victoria.

Frankie stands up, he has to name another nominee, he nominates Amber as a replacement. Zach gets up and tells Amber that she is sitting right where she belongs, he says Caleb tried to save you several times, even ate a pickle for you and it really pisses Zach off the way Amber has treated Caleb. Amber didn’t respond, mission failed for Team America. The only person that was happy after the speech is Jocasta, because the house is surely going to be against Amber.