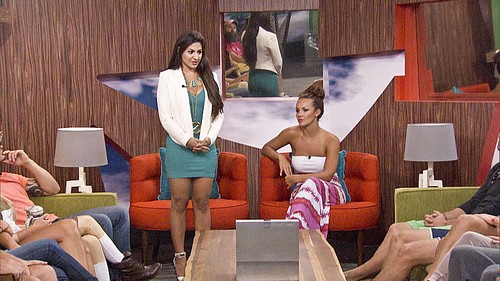 Tonight on CBS BIG BROTHER returns for tall new episode in their 16th season. On tonight’s episode Frankie and Zach nominations for eviction are revealed.

On the last episode there was another eviction and Brittany was sent home, Donny was saved. Frankie got some sad news from home, his grand father passed away. During the HOH competition, the house guests had to listen to country songs and match them up with which competition they referred to from this season. Zach was the first to win HOH, the last two contestants; Frankie and Derrick faced off against each other and Derrick gave the competition to Frankie so he could get something from his grandfather in the HOH room. Did you watch the last episode? If you missed it we have a full and detailed recap, right here for you.

On tonight’s show the two new heads of households move into their rooms and nominate two house guests for elimination we will also see the Battle of the Block.  If you want to find out what is going to go down tonight before the show, check our our nifty spoilers.

RECAP: Zach is hell bent on getting Amber out of the house because he heard that she is gunning for the boys. Zach wants her home before she sends him home.

Jocasta congratulates Donny on his win, meanwhile, he feels like he could be a pawn again if he doesn’t keep his HOH status.

Zach asks Frankie if they have a target and Amber is who they are thinking of. Zach also wants Caleb up, it is a good play for his game.

Caleb goes to see Amber and tells her that people are spreading rumours that she wants Zach out of the house. Amber tells Caleb that if Zach puts her up she is telling everyone about the alliance.

Zach is with Christine and Frankie, he tells Christine that she is going to have to put up as a pawn and throw the Battle of the Block competition. Christine is not happy about it, Zach tells her she is not going home so he doesn’t understand what the problem is.

Caleb hates pickles, but ate the whole thing in a bet with Amber so she would go on a date with him. Caleb is so excited about this date and has his boys set everything up for his special date. Caleb thinks it is going to be the best day of his entire life, yet there is this awkward silence in the beginning. Caleb tells Amber that her parents would probably love him. During the date, Amber turns and stares at Cody – yikes! Then Amber is more concerned about an ant crawling on her than Caleb.

Frankie is in the HOH room with Zach and Cody, he tells them about what Christine did. Cody tells Zach that he is on a power trip while Frankie thinks Zach is acting like a monster.

Zach goes to see Nicole and asks her how much she trusts Christine in this game. Nicole is nervous, she thinks Christine has an alliance maybe with Zach, why else would he mention her. Zach tells Nicole that he has no idea what is going on in the house. Meanwhile Zach has only accomplished to make Nicole paranoid.

Derrick is getting frustrated in his alliance so he secured himself a final two deal with Cody; the two sit down to come up with a name for their alliance. Derrick comes up with the Hit Men.

Donny is called into the diary room, they have a new task for Team America; get two house guests in a heated argument that lasts at least 20 seconds or longer and to take place during the nomination ceremony or the veto competition. Frankie thinks he will be able to do, he just needs to cattle prod Zach a little bit. Derrick doesn’t think it is a good idea to get anyone into an argument, but it is so easy to egg Zach on. The plan is that Zach wants to make fun of Christine during the nomination ceremony because she is a floater and Team America is hoping that it causes an argument.

Amber goes to speak to Zach and tells him that she was not trying to get him out of the house and in future, he should speak to her. Zach is not going to put her up on the block, but he is going back door her.

It is the responsibility of the two HOH’s to put up two nominations each. Time for the nomination ceremony; Frankie nominates Jocasta and Victoria, Zach nominates Christine and Nicole. Zach tells Christine that if they looked up in the Big Brother dictionary under Floater they would see a picture of Christine and former Big Brother player Jen holding hands. Zach then calls Nicole a Fruit Loop Dingas; whatever that means. Team America failed, there is no argument, just Nicole crying because of what Zach called her.

Frankie wants to make the house happy no matter what so nobody has hard feelings against him and if that means throwing Zach under the bus, so be it.

Time for the Battle of the Block competition, it is a wedding competition. The partners must build a giant wedding cake and then climb on top and stand up there for at least 3 seconds without falling down to win. Nicole and Christine win the Battle of the Block and Zach does not look pleased. Meanwhile, Jocasta says that she is going to do all what it takes to win the POV.