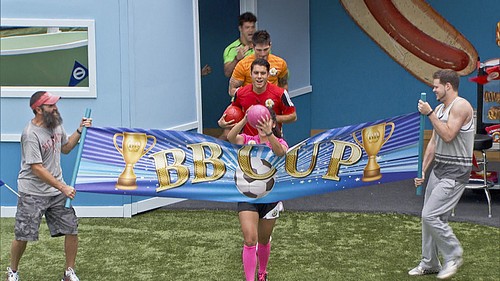 Tonight on CBS BIG BROTHER returns for tall new episode in their 16th season. On tonight’s episode a house guest is evicted and the new Head Of Household will be crowned.

On the last episode the Power of Veto competition was held and Victoria won. There were prizes and punishments awarded during the competition; Cody was punished with soccer kicks to his butt, Brittany had score 2400 soccer goals in 24 hours, Zach won a trip to Germany, Caleb won $5,000 and Nicole was punished with having to wear a germitard. It was no surprise when Victoria used the POV on herself which forced Cody to have to name a replacement nominee, he choose Donny. Did you watch the last episode? If you missed it we have a full and detailed recap, right here for you.

On tonight’s show we’re going to find out who’s going to be evicted from the Big Brother House – will it be Brittany or Donny? Also, the Head of Household competition will crown two new HOH’s.

RECAP: Donny knows he should never take anyone’s word for what they say, but he honestly didn’t think Cody would put him up. Brittany hates that she is on the block beside Donny who she really likes. Meanwhile, Cody is very upset that he put up Donny and hopes that not putting up Caleb, doesn’t bite him in the butt. Cody tells Frankie that he feels like such a bitch and if Caleb puts him up next week, he is going to kick Frankie in the nuts.

Donny is happy that Derrick tells him that he is safe but he is afraid that it might be Derrick that is making Cody do things that he doesn’t want to do. Cody meets with Donny and tells him that he only put him up because he wanted to secure Brittany going home. Donny tries to fish Cody to find out if he is an alliance, Cody doesn’t budge.

Brittany goes to talk to Caleb and tells him that she doesn’t care what she has to do, she wants to stay. Caleb tells Brittany that he would much rather Donny goes home because he thinks he is a bigger threat. Caleb then goes to see the guys and tells them that Brittany has fought harder than anyone in the house and deserves to stay in the game.

Frankie is called to the diary room, he gets a letter, his grandfather passed away. Frankie is crying, everyone is trying to console him and Brittany offers to read his letter because he can’t. The letter is so ad, his grandfather had cancer and was supporting him until his last moment. His grandfather’s name was Frank and even though he didn’t know anything about the show, he watched it to support Frankie. Everyone stands up and gives Frankie a group hug, he feels so supported and loved.

A lot has happened this week; Caleb had the chance to get the Veto but took $5k, he tells Julie he felt safe enough to take the cash. Zach on the other hand is excited to go to Germany and is glad that Caleb didn’t take his trip. Julie has news, this week there will be have nots and they have already been determined. The four have nots are the four laziest people in the game based on activity trackers they have worn over the past week. The have nots are Nicole, Caleb, Christine and Derrick. If any of them become the new HOH, they will not be a have not.

Time for the vote, but first Brittany has her final plea; she tells everyone that she never gave up and proved she wanted to be there when she did the goal oriented punishment. Furthermore, she asks everyone to give her one final chance. Donny thanks God for the opportunity, thanks his family, thanks to his girlfriend and there is a special place in his heart for all the house guests, God bless them and America.

Brittany is out of the house and sitting with Julie, it was a landslide vote. Brittany tells Julie that the house tends to vote with each other and many house guests are followers. Julie reminds Brittany that this was the third time she was on the block, why. Brittany says there was already an alliance set when she entered the house and thinks that is what caused the problem.

Time for the HOH competition; two at a time, house guests will face off. There will hear a country song and have to match it up with which competition they are referring to from this season. Derrick faces off against Frankie and gives it to him. It is now up to Zach and Christine; the winner is Zach. The new HOH’s are Zach and Frankie.