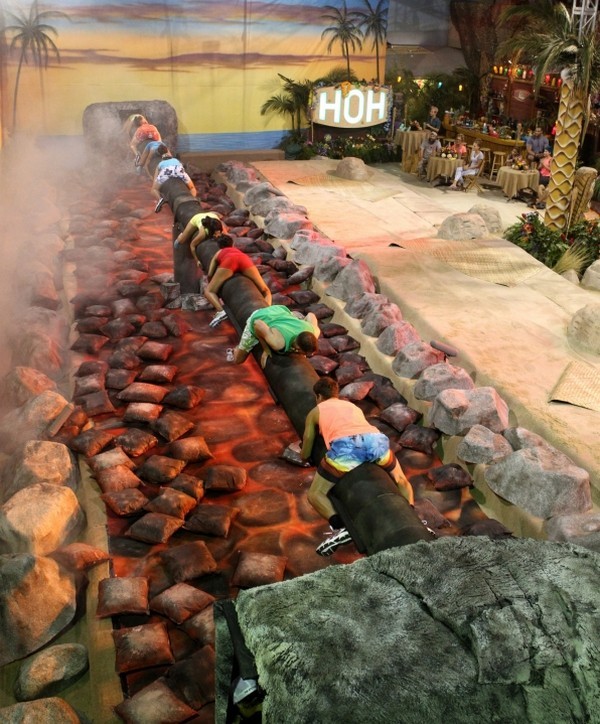 BIG BROTHER returned to CBS last week with its 16th season and I have to admit it is my guilty pleasure and Celeb Dirty Laundry will be covering all the fun live.  On tonight’s episode the nominations for eviction are going to be revealed and you just know that is when the drama really heats up.

On the last episode we were introduced to the final eight contestants and the second HOH competion was held, Caleb was crowned the second HOH. After the competition, Julie called all sixteen houseguests back to the living-room. She revealed to them that every week there would be two new HOHs crowned, and each HOH would have to nominate two house-guests every week — so there would be four players up for elimination every week. There would also be an all new competition called the “Battle Of The Block.” Every week the four nominees that are up for elimination would have to battle each other on the block, and the team that wins would dethrone their HOH and no longer be up for elimination. Did you watch the last episode?  If you missed it we have a full and detailed recap, right here for you.

On tonight’s show we’ll be finding out who’ll be up for eviction and are in danger of going home.  Of course CDL has already spoiled the episode for you and if you want to know who is up for eviction before the show airs you can head over and read the spoilers.

RECAP: Tonight’s episode of Big Brother kicks off with Caleb and Frankie and the parade of house guests following them upstairs to check out their new Head of Household room. Later the houseguests head outside, Christina and Nicole lay in the hammock together gossiping about the other houseguests. Christine and Nicole bonded instantly and Christine thinks they are going to be BFF’s.

Upstairs in their new HOH room Frankie and Caleb talk strategy and form an alliance. Frankie thinks that no one will see it coming since they don’t have anything in common. Caleb thinks it is time to start searching for some soldiers for their alliance. They decide to bring in Devin and Derrick to discuss an all guy alliance. Devin is all for an alliance, but Derrick is skeptical. He thinks it is a little early to forming alliances. They add Zach and Cody to their alliance and call themselves the Bomb Squad. Their ultimate goal is to “bomb the floaters.”

Devin wanders through the living-room and notices that the screen says “Nominations Today.” Devin and Donny slip in to the pantry, and Devin gives him a pep-talk about their alliance. Little does Donny know, Devin has abandoned him and joined the Bomb Squad. Devin decides it is his in his best interest to keep stringing Donny along.

In the HOH room Caleb and Frankie are discussing who they should put up for nominations. They are trying to determine who they can put up and get the “least amount of blood on their hands.” Right now they are contemplating nominating Paola, Hayden, Victoria, and Brittany.

Afterwards Frankie takes Victoria aside and reassures her there is no way she is going home, Victoria isn’t very convinced though. And, she is obviously bitter that her friend went behind her back and put her up on the block. Frankie explains that he nominated the first two players that fell during the HOH competition because he was trying to be fair.

The next day Devin reveals to Frankie, Cody, and Derrick that he recruited Amber and Christine in to the Bomb Squad. Derrick and Frankie are unimpressed, they think Devin has lost it and they lecture him about telling any one else about their alliance.

Downstairs, Donny is doing Yoga with Jocasta, Joey, Amber, and Hayden. Devin watches him stretching with them and making them all laugh. He runs upstairs and tells Frankie and Caleb that he thinks Donny is playing him and isn’t really a grounds-keeper. Frankie thinks that Devin is paranoid and is seriously reconsidering working with him.

It’s time for the Battle of the Block competition, the houseguests head outside and see that the back yard has been transformed in to a 1920’s ballroom party, with a swingset. Paola and Donny will be competing against Victoria and Brittany. The teams will be performing a relay race, while swinging on a swing set to see which team can fill a champagne flute first. Victoria and Brittany are off to a great start, and their vase is half full. Paola on the other chance can barely get her swing moving, and then she falls off her swing and has to start. Victoria and Brittany are out of sync, and suddenly Paola and Donny start gaining on them.

Finally Victoria and Brittany fill the flute and win the competition, meaning they are no longer up for eviction, and Frankie is no longer HOH. Paola and Donny will have one more chance to save themselves though, they still have the Power of Veto competition to look forward to.