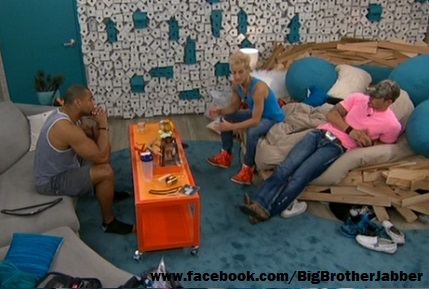 Big Brother 16 is officially under way and the live video feeds of the house are up. If you don’t want to know any Big Brother spoilers, then you should probably stop reading now. During the two-night season premiere of BB16, Julie Chen revealed a huge twist and announced there would be two HOHs every week — and each HOH will nominate two players for eviction.

On Sunday June 29th, an all new episode of BB16 will air, and Frankie and Caleb will make their four nominations. However, if you have been tuning in to the live feeds, then you know that the HOH’s have already nominated the four players. Frankie put up Victoria and Brittany; Caleb put up Donny and Paola. The houseguests are making side alliances left and right, but it appears that the HOHs are sticking to the original teams of eight that Big Brother divided them into and nominating players from the group they didn’t enter the house with.

So, Big Brother fans, what do you think of Caleb and Frankie’s nominations? Who do you think will win the Battle of The Block competition? Donny and Paola or Victoria and Brittany? Let us know what you think in the comments below and don’t forget to check CDL for all of your Big Brother 16 spoilers.