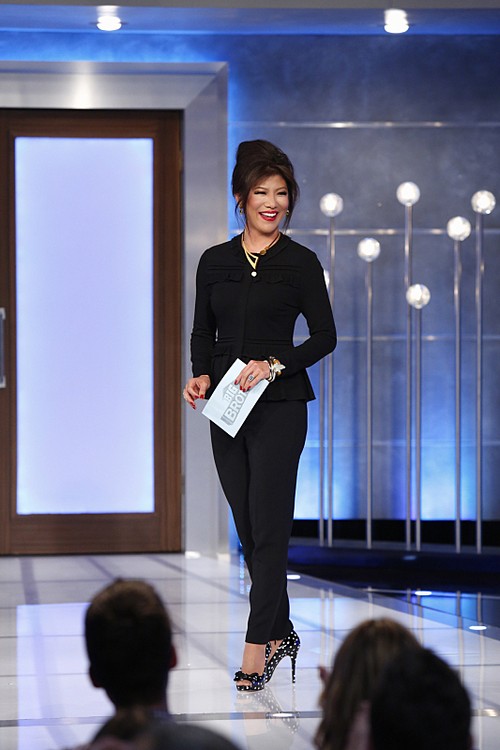 Tonight on CBS Big Brother 16 returns with an all new Friday September 19, Week 13 episode 39 called, “Special Episode.”  On tonight’s episode we get a look at the houseguests’ scheming, backstabbing and alliances from Season 16 includes never-before-seen footage. Also: The first part of the Head of Household competition is played.

On last night’s episode as we race towards the finale Derrick announced his nominations.  Then the Veto competition was held and we were on to the live eviction where Caleb was sent home.  We were be left with the “final 3 houseguests,” and the final HoH competition will began.  Did you watch the last episode?  If you missed it we have a full and detailed recap, right here for you.

On tonight’s special episode we will get to see Round 1 of the final HoH competition begin.  The competition will be an endurance one.  Along with the start of the HoH we will be treated to a look back at what went on during the season.

Big Brother 2014 airs tonight at 8pm with another great episode, we will be live blogging the show with all the up-to-the-minute details so make sure to come back to Celeb Dirty Laundry and watch the show with us. Can’t wait to see how all the drama plays out, how about you? Are you excited about Big Brother 16?  Who are you rooting for to win?  Hit the comments and let us know your thoughts.

Tonight’s episode of Big Brother kicks off with a recap of Caleb Reynold’s eviction, the final three players in the BB16 house are Derrick, Victoria, and Cody. After Caleb’s eviction, Derrick secretly relishes the fact that everything is going exactly the way her planned. Victoria corners Derrick after Caleb leaves and asks him about the Hitmen Alliance that Cody exposed, Derrick reassures her that he is taking her to the final two because she is like his sister and “blood is thicker than water.”

The next day the final three are served an elaborate breakfast and crack open a bottle of champagne to celebrate how far they have made it in the game. While they are eating breakfast Victoria confesses that she is shocked she made it to the final three because she was an outsider in the game. Now that the game is almost over Victoria asks if there was an all guy alliance in the beginning, Derrick fills her in on how the Bomb Squad began and how Devin decided to recruit Amber and Christine to join them. Cody points out that if it wasn’t for the Bomb Squad, he and Derrick never would have gotten so close and formed a day two alliance, so he doesn’t regret it. They laugh about how psychotic Devin was, and the crazy house meeting that he called.

Next Victoria, Cody, and Derrick reminisce about all of the flirting that went down in the house. They all agree that it was obvious Nicole and Hayden liked each other from the beginning. But the funniest non-relationship in the house was by far Amber and Caleb. But, Zach and Frankie were definitely entertaining as well. Derrick thinks that everyone loved Frankie, until he started lying and turning on everyone. They laugh about when Caleb refused to play the BOTB with Caleb, and then Zach cursed him out afterwards.

After the final three eats their breakfast, they continue to look at the wall of all of their evicted co-stars and take a walk down memory lane. Derrick thinks that Nicole definitely made the house more fun to live in and they laugh about when she tackled Zach and gave him the ultimate wedgie. Nicole always seemed to gravitate towards Donny, who was the most honest and kind-hearted player in the house. They think that he had genuine relationships with almost every one in the house, especially when he used the Power of Veto to save Jocasta. Victoria wants to know what Cody and Derrick’s favorite memory of her in the house. Cody laughs that it was definitely watching her try and compete in competitions.

Derrick says there were a lot of characters in the house, but Frankie by far had the craziest personality. They laugh about when Frankie revealed that he was Ariana Grande’s brother, and Zach was furious that he hid it from him and had “tricked him.” Zach was convinced that Frankie told everyone he was playing for charity as a strategy so that everyone would let him win and save the children in Africa.

Next the final three reminisce about the hilarious neighborhood watch that Team America started, and how everyone was certain that it was Zach because he was such a trouble maker. They laugh at how ridiculous Zach was and all of his crazy speeches at Power of Veto ceremonies, especially the time he called Devin out and said he was huge liar and made fun of him crying about his daughter.

Tonight’s special episode of Big Brother ends with a sneak peak of the 1st round of the final BB16 HOH competition. Victoria, Derrick, and Cody head to the backyard and see three hang gliders against a wall in the back yard. They learn that the first round of the HOH competition will be endurance, and the last one still hanging will be the winner. The climb up on the walls are grab on to their gliders and freezing cold rain begins pouring down on them…

Update: After the live show Derrick showed his determination and captured the final HOH round 2 competition! Thus making the final round 3 HOH competition an all Hitmen event. Either Cody or Derrick will emerge victorious and win final HOH – then they must choose whether to stick to their promise and take the either to the final round or betray their fellow Hitmen member and bring Victoria. It’s crazy hypothetically Victoria could win Big Brother 16 without having done a darn thing! Talk about a sleeper strategy!