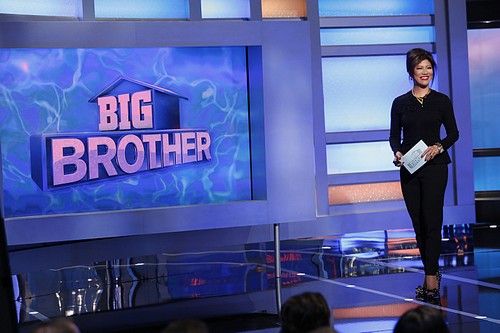 Tonight on CBS Big Brother 16 returns with an all new Wednesday September 17, Week 12 episode 38 called, “Live Eviction.”  On tonight’s episode we are going to have one week of BB in one night.  Nominations will be announced, the Veto competition will be held and another houseguest will be evicted.

On last night’s episode the PoV competition was held but not Julie announced that they were going to hold the live eviction right after and Frankie Granded was finally sent home.  I have to say I smiled a bit when Frankie was finally sent to the jury.  Did you watch last week’s episode?  If you missed it we have a full and detailed recap, right here for you.

On tonight’s episode as we race towards the finale Derrick announces his nominations.  Then the Veto competition will be held and we are on to the live eviction.  We will be left with the “final 3 houseguests,” and the final HoH competition will begin.

Tonight’s episode of Big Brother kicks off with Victoria, Derrick, Caleb, and Derrick watching Frankie’s picture turn to black and white after he walks out the door and is evicted. Apparently four hours before Frankie was evicted, Derrick, Caleb, and Cody took Frankie aside and confessed to him that they were voting him out. Frankie was not happy and informed them that he is the single most important person in the game, and when he goes to the jury he is powerful enough to decide who the entire jury will vote for to be the winner. Caleb and Frankie proceeded to get in to an argument over which one of them is more powerful.

After Derrick is crowned the next Head of Household, they head up to his HOH room and Derrick is ecstatic when he hears his daughter’s voice come over the speakers saying “holla Daddy.” Afterwards Derrick takes Victoria aside and warns her that she is going back up on the block because they have to keep pretending that they hate each other, Victoria thinks that she is going to the final two with Derrick. Next he talks to Cody, who he also reassures he is taking to the final two. Next, he breaks the news to Caleb that he is putting him up on the block, but he thinks he is just a pawn and Victoria is going home. It’s time for the nomination ceremony, Derrick stays true to his word and puts Caleb and Victoria up for eviction.

Now it is time for the last Power of Veto ceremony of Big Brother 16. The houseguests head to the backyard and learn they will be playing a game based on the TV show called Stalker, and they will have to assemble a crime board puzzle with fourteen clues that they have to match pictures of ex-houseguests. The first player to complete the puzzle correctly and hit their buzzer will win the POV. The houseguests begin racing to match the clues, Cody is confident that he is going to “smoke this competition.” Caleb isn’t feeling very confident though, webs aren’t his forte. Cody hits his buzzer first, but he is wrong and has to go back to the drawing board. Meanwhile, Derrick is trying very hard to lose the competition, because he doesn’t want to win POV.

Cody makes a few changes to his board and rushes over and hits the buzzer again, and everything is correct, he has won the Power of Veto. Caleb is disappointed he couldn’t pull himself off the block, but he isn’t worried about it because he is sure he is going to the final three with Cody and Derrick. Since Cody won the POV, he will be the only voting in the live eviction, and must announce aloud whether he chooses to evict Caleb or Victoria. After the veto competition Caleb brags to Cody about how loyal and “beastly” they are, and jokes that they are like the “final three mobsters,” Cody laughs along with him, but little does Caleb know Cody is about to be the opposite of loyal and vote him out of the house.

It’s finally time for the live eviction. Julie Chen gives Victoria and Caleb a chance to speak their peace and make one last ditch attempt to persuade Cody to keep them in the house. Caleb reminds Cody one more time about loyalty, and the fact that Caleb has always had his back. Cody stands to cast his sole vote, he reveals that he has a final two alliance with Derrick and in order for them to make it to the final two, Caleb has to go home today.

Caleb is officially evicted from the Big Brother house and heads out the door and joins Julie Chen on stage. He confesses that he was blind-sighted with his eviction, but he’s hurt that Derrick has been lying to him this entire time. Overall Caleb is proud that he made it all the way to the final four, Julie shares his good-bye messages from Victoria, Cody, and Derrick.