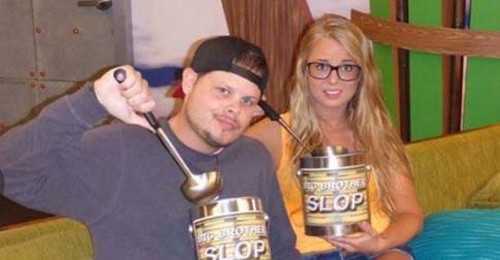 Tonight on CBS BIG BROTHER returns for an all new episode in their 16th season. On tonight’s episode the Power of Veto competition will be held in the Big Brother household.  We will find out if the person who wins the PoV uses to remove one of the people on the block, Christine or Nicole.  If you need to know what happens before tonight’s episode we happen to have spoiled it and have all the information for you about who won PoV and what they did.

On the last episode, Caleb won the HoH competition in a very grueling physical challenge. During the nomination ceremony it was no surprise that Nicole was put up for eviction and Caleb also nominated, Christine.  Julie announced that this week would be a double eviction week. Did you watch the last episode? If you missed it we recapped it all, right here for you.

On tonight’s episode the house guests must go head to head with each other once again to fight for the Power of Veto.  Later during the Veto ceremony we will find out what the person who wins does.  Don’t forget tomorrow night is a double-eviction!

It’s time for #BB16. Nicole and Christine were nominated by Caleb and he says that Christine is just a pawn. Derrick wants Christine out because he’s not a fan and thinks she may gun for him but he says he has to wait and see who wins the veto. In the meantime, he’s planting doubts in Caleb’s mind. Christine is muttering and angry at the bomb squad and says she has to play for herself.

Nicole comes to Derrick for a hug and she’s crying about being on the block and being a have-not. She says it’s harder to come back than anyone knows. She says she doesn’t want to be terrorized all week and he tells her that’s not going to happen. He hugs her and says it’s just a game and if she wins the power of veto, she can make a move. He tells her to trust him.

Cody and Caleb talk and decide that if Nicole wins POV they’ll put up Victoria and vote her out. Derrick comes in and Caleb says that Christine may put him up next week. Derrick says Christine knows that no one is taking her to the end. He plants some seeds about Christine being much more dangerous than Nicole and says she’s a beast.

Cody totally buys into it. The other guys eat this up and agree that Nicole is weak and can be more easily beaten. Derrick’s got them targeting Christine. Victoria talks to Nicole and they wonder if the Detonators have figured out yet that they will have to turn on each other. They talk about how close Christine and Cody are and Victoria says it’s creepy.

Nicole says Christine betrayed her week one. Nicole says if Victoria wins the veto she could take her down. Victoria tells Nicole she has to try really hard to win it. Nicole says she won’t go down without a fight. Derrick goes back to Caleb and asks about his knee. Caleb says it will be hard to decide the final four. Derrick tells him he would definitely pick him over Frankie.

Derrick tells Caleb that him versus Cody will be tough. Derrick decides to build up Caleb’s ego and steal him from Frankie. He tells Caleb he played a better game than he has, is stronger and has played a much better game than him. Derrick says he’s more of a floater and that Caleb is a much tougher competitor. Derrick says it would be close if it was him versus Frankie because Frankie has the gift of gab.

Derrick says Frankie is one more person they have to beat where they know they can beat Derrick more easily. He says he can leave with the $50,000. Caleb tells him he’ll take him to the end after Derrick puffs up Caleb’s ego. Christine mutters to herself as she goes to talk to Caleb and says she doesn’t want to hang out with the #Bombonators. She says she has to put on a happy face.

Caleb calls everyone to pick names for the veto competition. Six will compete – Caleb, Nicole, Christine and three others. Frankie hopes he gets to play. Caleb draws first and gets house guest choice. He chooses Cody since he says he’s the healthiest and ready to play. Nicole chooses Derrick. He gets a holla. Derrick doesn’t want to win it, but wants Nicole to get it. Christine draws Victoria.

Nicole is glad she got picked because she thinks if Victoria wins she might help her out. The meeting breaks up and Frankie is annoyed. He complains about this and mopes away. In the HOH room, Derrick tells Cody and Caleb that Frankie wanted to play today. Caleb tells them he will pick them over Frankie since he lied to him about Amber. Cody says he won’t protect him.

Derrick wants to get them talking about Christine again. He says Frankie wants Nicole out more than anything. He says Nicole will be out for Frankie. He says Christine will be after Caleb. Cody says even though he’s tight with Christine, he thinks that she should go. Frankie calls everyone to the backyard. It’s an explosion themed challenge.

Frankie is hosting and says they have to avoid dynamite blowing up. They get a video showing a sequence of wires and then they have to cut them the right one to defuse their bomb. If they cut the wrong one, they are eliminated. Plus the first one out have to be dinosaurs for the week. Caleb says he’s now ready to blow up Christine.

The first round is up and they’re shown three wires and told to cut the second color. They all make their cuts and Cody’s blows up all over him – paint and paper. He’s covered in goop and says it went up his nose. He’s the only one out and the first dinosaur. The second round shows four and they’re told to cut the one shown between the two greens. They all make it through round two.

Round three shows the wires even faster. Caleb’s bomb blows and he’s covered in goop and is the second dinosaur. It’s down to Victoria, Nicole, Christine and Derrick. Round four has them cut one that wasn’t shown. They all cut and then Victoria gets smoked. She’s out. Round five is even harder and they prepare to cut – they all make it through.