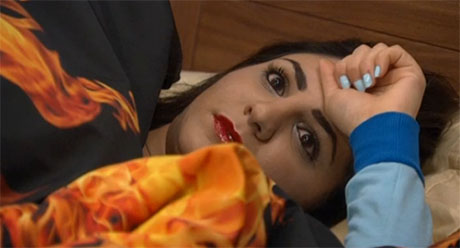 Big Brother season 16 has been ridiculously predictable and unexciting, but as Week 10 of the CBS reality TV series is winding down, the drama is really starting to heat up. Caleb Reynolds won the Week 10 Head of Household competition at the beginning of the week, and during the nomination ceremony he put Nicole and Christine up on the block for eviction. According to Big Brother 16 spoilers from the live feeds, Christine managed to win the Power of Veto. There was no doubt in anyone’s mind that Christine would use the POV to save herself; the real question was…who would Caleb nominate for eviction in her place?

Big Brother spoilers from the live feeds revealed that Caleb was contemplating backdooring Frankie Grande at the POV ceremony, and Derrick was really pushing sending Frankie home. Just when we all thought Frankie was surely going up on the chopping block, he managed to talk Caleb down. Big Brother 16 spoilers tease that Caleb has finally held the Power of Veto ceremony and, as predicted, Christine took herself off the block. HOH Caleb nominated Victoria for eviction, instead of Frankie.

So, going in to Week 10 evictions, Victoria or Nicole will be voted out of the BB16 house. It really doesn’t look good for Nicole at this moment, considering Derrick has had Victoria’s back for a while. But anything could change between now and the live eviction on Thursday, September 4th. And Big Brother spoilers reveal that on September 4th there will be a double eviction, so Nicole or Victoria won’t be the only houseguests evicted. After the houseguests vote and say their goodbyes to Nicole or Victoria, they will compete in another HOH, hold a nominations ceremony, compete in a Power of Veto competition, and evict another player, all in one hour.

So, Big Brother fans, who do you think will be evicted on September 4th — Nicole or Victoria? During the last double eviction, Hayden wound up being evicted as well. Who do you hope the second evictee will be? Share your predictions in the comments below and don’t forget to check CDL for all of your BB 16 spoilers and recaps.