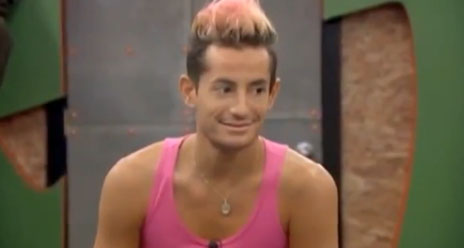 Big Brother 16 contestant Frankie Grande has a big mouth. There’s really no getting around that fact. He’s a talker, and he’s constantly making jokes that some viewers could potentially deem offensive and/or quite crude in nature. Recently, Frankie made a rather crude joke about Victoria, particularly her virginity. He said, along with some suggestive hand gestures, that two of the male houseguests should “team up” and “take all her virginities.”

Cody, a fellow male houseguest, sort of laughs but, as you see in the video, you can tell he’s quite uncomfortable by the comments being made in his presence. “Oh, no. That’s so foul,” he says.

Now, Victoria’s family, particularly her mother, is claiming that this “joke” made by Frankie is definitely a “rape joke” and now makes her daughter “a target for rape.” She thinks producers should have done something to stop Frankie’s rant. Not only does she want an apology from Frankie eventually, but she’d also like one from Frankie’s famous sister, Ariana Grande.

Honestly, not sure how Ariana Grande got into this whole mess, as she’s not in the house and has no control over her brother in the house. While I do think it would be good for CBS and Frankie to issue an apology, I don’t think it’s necessary that Ari step into apologize for her brother’s insensitive remarks as well.

What do you all think? Do you think CBS should’ve done something about Frankie’s remarks? Do you think Frankie needs to apologize to both Victoria and her family? Leave your thoughts in the comments section below. Keep an eye out on CDL for all your Big Brother 16 spoilers and recaps!