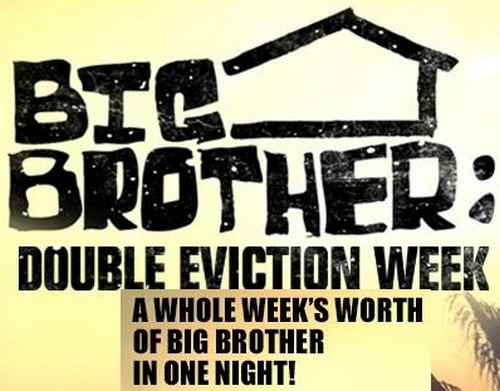 Tonight on CBS BIG BROTHER returns for an all new episode in their 16th season. On tonight’s episode there will be a double eviction and two houseguests will be evicted from the Big Brother house.

On the last episode, the house guests had to go head to head with each other once again to fight for the Power of Veto. At first, the plan was to do whatever takes to make Christine win because Derrick and the crew wanted Frankie out. By the time the competition was held, the guys turned and wanted Nicole out. In the end, Christine won the POV which guaranteed her not to be evicted next. Caleb had to name a replacement nominee, he choose the Queen of Floaters herself, Victoria. Did you watch the last episode? If you missed it we recapped it all, right here for you.

On tonight’s episode not only will one house guest be eliminated, either Nicole Franzel or Victoria Rafaeli but we will see a whole week of BB happen during the evening.  We will see the HoH competition, then the nominations, the POV and another house guest will be eliminated in a double eviction episode.

RECAP: It’s time for #BB16 on a double elimination night. Nicole and Victoria are on the block. Julie welcomes us to the second double eviction event of the summer and says Jeff and Jordan will return on Sunday with a big surprise for the house guests and Julie promises a surprise of her own tonight. Frankie offers to make lunch and Nicole is annoyed at the chicken vs fish discussion and thinks they’re heartless and don’t care how she feels. She’s pissed off and walks away to go find Victoria.

She tells Victoria that Caleb has no guts. She asks how it benefits Caleb and Victoria says she thought he was going to put up Frankie but Nicole says Caleb is a wimp. Caleb chats with Frankie and says they are close to the final four. Caleb breaks down and tells Frankie he thought about putting him up. He says he doesn’t want Frankie telling him behind his back and then Frankie coming after him. He uses the “we” word a lot and Frankie asks who brought it up.

Caleb says it’s Cody – totally throws him under the bus. Frankie believes him and says he doesn’t think it could be Derrick (HA!). Frankie finds Derrick and tells him he knows what they were talking about last night and Derrick says it wasn’t serious. He says Caleb brought it up and says he’s constantly paranoid. Frankie says it would have been a crazy big move and says he thinks Caleb was really thinking about it. Derrick tries to talk him off the ledge.

Derrick tells him he’s going after Christine and Frankie if he wins. He says he’ll be damned if he lets Frankie get to the end. The house guests are in the living room when Julie greets them. She tells them that it’s time for a double eviction and then there’s a holla. She says there will be a whole week of big brother in the next hour. The others will vote in the next few minutes.

Nicole tells her family she loves them then tells the others that they need to stop playing bib baby and play Big Brother and make some big moves. Victoria tells them she’s next to Nicole who’s a great player and no hard feelings either way. They go to vote. The girls hold hands while the others take turns voting. All will vote except Caleb who will only vote in case of a tie.

Christine votes first and votes to oust Nicole. Derrick is next and he also votes for Nicole to leave. Frankie is next and he votes Nicole as well. So Nicole is going home and Cody and his dino suit come in. He compliments her and she says he looks adorable. He also votes to evict Nicole. What is the deal with the Detonators? Big babies indeed. Julie tells them that Nicole has been evicted again.

She and Victoria hug it out. She hugs the others and goes out to a huge round of applause. In the house, the others say – final six and applaud themselves. Nicole tells Julie that she’s back too soon. Julie asks why it was so hard and she says there are a lot of good game players and she can’t tell who will be leaving. She asks who will be the first to turn on the others and she says Frankie will turn on Cody. She says she thinks they are all about to turn.

Julie asks her about Hayden. She says they both admitted they like each other. Nicole says she’s interested to see who will be evicted after her and hopes it will be Christine or Cody. Julie tells her she can head to the jury house and says she’ll see her on the finale night. It’s time for the HOH competition. Julie says this HOH must immediately put two people on the chopping block.

Caleb can’t compete. It’s a competition called What the Bleep? Julie will play videos with bleeped out words and they have to decide if Julie is telling them accurately what the bleeped out word is. The first video clip is Donny reading his HOH letter that says “I miss your —–” and Julie says it was massages. Derrick answers false, the rest answer true and Derrick wins HOH in one round – the answer was kisses.

In just a couple of minutes they will nominate then play for Power of Veto then the vote. Derrick paces and thinks. Victoria is first to come see him. He hugs her and he tells her that he has to put her up. He tells her he’s going to put her and Christine up and if Christine gets the veto, Frankie is going up. Christine comes up and asks him not to put her up. He doesn’t commit.

Caleb is next. He tells him to try and win the veto and says it will be Christine or Cody. Julie calls for the live nomination ceremony and they are already gathered. Derrick comes in and says he talked to everyone and he’s going with the house to not make waves. He tells Victoria and Christine it’s not personal. They sit and Julie tells them one of them may be evicted but they can save themselves with the veto competition.

The veto challenge are three table mazes designed to mimic crop circles. They have to navigate a ball through all three at increasingly lower elevations until the ball drops on a cute little alien and activates a sensor. They start at the tallest table which is about waist high. Frankie is in the lead with Christine and Caleb right behind him. Cody and Victoria are close behind them.

Frankie is the first to the final maze. Caleb now is too then Christine. But it’s too late, Frankie wins POV. Julie tells him he has just a few minutes to decide if he’ll use it or not. I’m betting he won’t since he knows there’s a backdoor risk to him. Everyone heads back into the house. Derrick and Frankie are talking about sending Christine home.

Cody comes in and they hug. He tells him Christine and says love you bye. There’s no one left and he comes downstairs. Julie tells him it’s time and that the ladies can plead their case. Christine says she doesn’t expect him to use it. Victoria tells him she loves him and says she understands. Frankie announces that he will not be using it and will honor Derrick as HOH. He puts the necklace in the box.It’s time for America to vote on the next Team America challenge. The options are: wear down the competition by convincing everyone to fast for 24 hours while Team America secretly eats – or -wear down the competition by convincing everyone there’s a rodent in the house and keep them up all night trying to catch it.

You can vote at www.CBS.com/BigBrother.

It’s time for the live vote and eviction but the first get to make their pleas. Christine tells her husband he’s hot and she misses him and that she’d like to be the last girl standing. Victoria says she appreciates a vote to stay so she can keep playing and says no hard feelings. Derrick won’t get to vote. Caleb, Cody and Drankie are the only ones voting.

Frankie congratulates Victoria and the others for final five. He calls her a princess. Julie comments on her not saying goodbye to the fellas and asks if she’s shocked. Christine says she was expecting it for a while now since she was involved with a boys club. Julie asks if it was a mistake not to stick with Hayden and Nicole and she says she does but it might not have worked out any better.

Julie shows us a button – The #BBRewind – and says it’s a new twist. It could pull the next two nominees off the block for a total rewind and redo of the whole week. We’ll find out more on Sunday and see this twist unleashed on the house guests. Julie announces BB will be Sunday, Tuesday and Wednesday at 8 pm through the rest of the season because of football.

In the house, they talk about the button they can see and wonder what it’s for and Caleb says he wants to touch it. They tells him not to. He really wants to poke at it.

Update: Frankie won the HOH competition for week 11 – we will be bringing you all the details from the live feeds shortly!