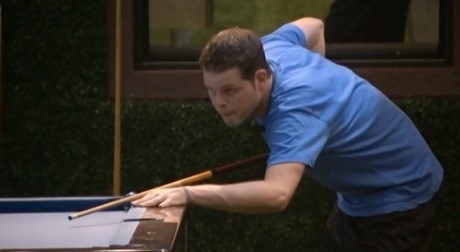 Big Brother 16 spoilers on the live feeds revealed last week that the BB16 players pushed the Big Brother Rewind button, so week 11 was a huge snooze-fest since we knew none of the houseguests would be evicted. Week 12 kicked off with a repeat of last week’s Head of Household competition, but spoilers revealed that, this time around, Caleb won the competition — not Frankie Grande. With only four possible players for Caleb to put up on the eviction block, it was really anyone’s guess who he would nominate, since he was going to have to put up at least one of the members of his original alliance regardless of who he chose.

Going into the week 12 nominations ceremony, Caleb has been loyal to Frankie and working with him for weeks. But Derrick, the master manipulator, has been pressuring Caleb to put Frankie up on the block for eviction. According to Big Brother spoilers form the live feeds, Caleb has held the week 12 nominations ceremony, and Victoria and Frankie are up for eviction. Apparently, Caleb and Frankie’s alliance didn’t stand a chance against Derrick’s amazing power of persuasion.

The final five houseguests will all compete in the week 12 Power of Veto competition, so Frankie and Victoria’s fates aren’t exactly sealed yet. Victoria may pull off a miracle and actually win a competition and save herself, although if either of them win the POV, it will most likely end up being Frankie considering his winning record when it comes to competitions.

What do you think about Caleb’s nominations? Are you surprised that he actually put Frankie up on the block for eviction? Do you think there is any chance of the remaining five players having a thought of their own for once this season and deciding to work together to backdoor Derrick? Share your thoughts and theories in the comments below and don’t forget to check CDL tomorrow for more BB 16 spoilers.