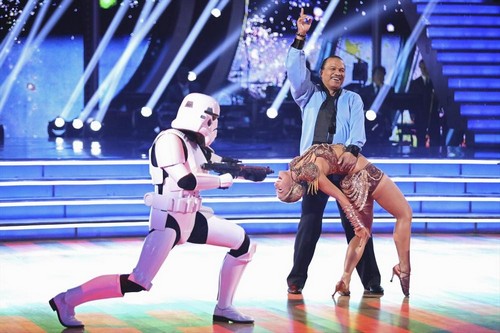 Legendary leading man Billy Dee Williams danced a Tango, on tonight’s season 18 episode 2 of Dancing with the Stars. The show kicks off with a show-stopping opening number choreographed by Mandy Moore featuring the entire cast followed by an announcement that is not to be missed!   We posted a nifty bio of Billy Dee Williams so you can get more familiar with him.  If you missed tonight’s show you can read a full and detailed recap, right here.

On last episode Billy Dee performed a Cha Cha Cha and Len liked it saying, “You were on time, you did not forget your routine.  You just have to come out with more.  You did a good job, well done.”

Billy Dee Williams and professional dancer Emma Slater: dancing a Cha Cha Cha.  Cody has been getting ready for her dance tonight.  She tweeted, “#TeamSlando is back & ready to tango tonight! Your votes will keep us dancing! #DWTS”

JUDGES COMMENTS: Carrie Ann: “I think there are many men your age jealous of you.  I don’t want you to get discouraged I know you have hip issues.  I thought you handled the choreography well you did not miss a step.  You need to get more content.” Len: “If tango is a plant it is a cactus.  This was like ivy it did not have enough going.  Keep having fun and come back next week.”  Bruno: “You went to the stylized minimum approach.  With those three beauties around you I understand.”