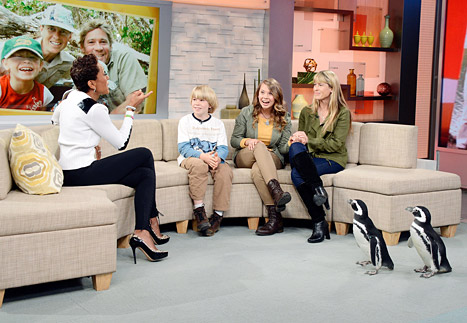 We can add one more person angry with Bindi Irwin for joining a project sponsored by SeaWorld. And this time it’s her own grandfather. The 15-year-old daughter of the late Crocodile Hunter, Steve Irwin, announced last week that she had partnered with SeaWorld’s Generation Nature initiative. The project is meant to educate kids about animals and encourage them to “become game changers for wildlife and wild places,” Bindi said.

PETA was quick to denounce the initiative. Now, Bindi’s grandfather and Steve’s father, Bob Irwin, is also speaking out and has released a statement on his website

“My personal stance is that any organisation that keeps animals in captivity that does not consider and provide for that animal’s physical, mental, and emotional needs should not be keeping that animal and other solutions should be sought out.

The Bob Irwin Wildlife & Conservation Foundation Inc. and I do not support the use of captive animals for the performance of tricks with the intent of mere entertainment for financial gain.”

Bob is a respected Australian conservationist and also opened Australia Zoo in 1970. Steve famously filmed The Crocodile Hunter series in the zoo and it now owned by his widow, Teri Irwin. Bob states that he and Steve ensured that all animals in Australia were kept natural environments and they upheld extremely high animal welfare standards.

SeaWorld has been heavily criticized for its treatment of whales since the release of the documentary, Blackfish. The film claimed SeaWorld breaks up orca families, teaches them “unnatural” tricks, and fails react to hostile warning signs. PETA released a statement soon after Bindi made her announcement.

“The Irwin family has been exploiting animals for years, so it comes as no surprise that Bindi has agreed to become SeaWorld’s latest shill. But plastering her face on SeaWorld’s website won’t cover up the fact that orcas, dolphins, and other animals are suffering in SeaWorld’s tiny tanks after being ripped from their families. What millions have realized—through PETA’s massive campaign and the hit documentary Blackfish—is that SeaWorld is no place for anyone who truly cares about animals,” PETA stated.

Although Bob was unaware of Bindi’s decision and disapproves of SeaWorld, he does hope for a positive outcome. “I can only hope that this partnership between SeaWorld and my granddaughter, who has followed in Steve’s footsteps, results in the best possible outcomes for the welfare of all animals held in captive facilities around the world,” he wrote.

Blackfish did depict SeaWorld in a negative light and this new initiative seems like a way to save face. PETA has also suggested that SeaWorld is using Bindi so they can continue to make money. But what do you think? Are Bindi and Terri Irwin making the best decision or is SeaWorld just trying to eliminate all the negative press it has received over the past few months.