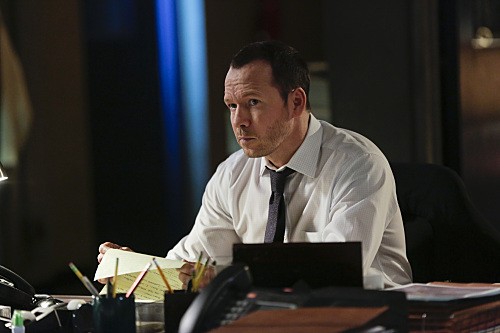 Tonight on CBS Blue Bloods continues with an all new Friday October 31, season 5 episode 6 called, “Most Wanted.” On tonight’s episode an international felon keeps getting away with murder, but Frank and Danny set out to stop him. Meanwhile, Erin considers going into private practice in order to pay for Nicky’s college; and Danny gets off on the wrong foot with his new boss.

On the last episode, Jamie was targeted by a vengeful thug after he intervened in his abusive relationship with his girlfriend. Meanwhile, Frank had to deal with a political scandal involving insensitive comments made by Henry that were illegally recorded and leaked to the press. Did you watch the last episode? If you missed it, we have a full and detailed recap right here for you.

On tonight’s episode Frank and Danny are determined to put away an international felon who repeatedly manages to walk away from murder charges, but they struggle to come up with the necessary evidence to earn a conviction. Meanwhile, Erin debates going into private practice when she looks into college costs for Nicky, and Danny butts heads with his new boss.

Blue Bloods “Most Wanted” airs tonight at 10:00 pm ET and we will be live blogging all the details. So don’t forget to come back and refresh your screen often for live updates.

Could road rage actually lead to the capture and arrest of a world renowned criminal? Though it sounds unlikely it’s actually starting to look that way on tonight’s episode of Blue Bloods.

Danny finally has gotten his hands on a man so known for his reign of terror that even Interpol wants him. And so far Zoran Brasha has managed to get away with his crimes because of some legal loophole or another but this time he got him on assault after the cops pulled up on him still carrying a bloody weapon he used on his victim.

However Danny still has another person to contend with. His newest boss is a bit of a ball buster and she’s not particularly fond of Danny’s methods. There are too sloppy and often land her department in trouble with 1PP. Hence Danny has been warned to keep all investigations by the book from now on. And in case he gets any ideas, she’s warned him that she’s got the full backing of his former Sergeant. So he’s not the only person with pull at 1PP.

But this case with Zoran might need someone like Danny to bend the rules. Because Zoran is notorious for killing off witnesses and he’s already left behind a message for the guy he assaulted. Which leads Zoran to being inconvenient towards Frank and Jamie’s plans.

Frank asked Jamie to fight in the NYPD vs. FDNY boxing match. He did this in order to free up his other son Danny. Danny after all has two kids that are excited about Halloween so at best the doting grandfather wanted to ensure his son was there to appreciate the holiday with his kids.

Though all that planning seems to be for naught when Danny wounds up getting wrapped in Zoran’s case. The victim and key witness had later changed his story after his niece’s life was threatened. So there was nothing to tie Zoran to assault. His lawyer had earlier come with a plausible excuse about why Zoran was there and had blood on him. And without any other witnesses – it looked like Zoran would get to walk away from yet another charge.

Yet the reason this case was important and that’s meant for other cops as well is because Zoran had once killed a cop. He killed an off-duty officer after they had gotten into a fight at a bar. The he got one of his men to confess to the crime.

So taking down Zoran is personal for the whole Regan family. And hit a closer note for Erin seeing as her opposing counsel used to be an old friend of hers back at Law school. One of them went into private practice and the other took the nobler but far less pay route of public service.

Lately Erin has been thinking a lot about money. Her daughter is going to college soon and college is expensive. At least for a single mother whose ex has way too many excuses about why he won’t be able to help out. So that’s made Erin look at alternatives. One of them being whether or not she should join a private practice.

Erin has even gone as far to take interviews while she works Zoran’s case. Though in all honesty she thought her brother Danny had the case pretty wrapped. He had found his witnesses and had also found footage of the assault.

But no one had planned on Zoran making a run for it. Once he knew the cops were coming for him – he fled and there was really only one other option left to find him. And that was to turn his own lawyer against him.

Erin reached out to her old friend and she secretly asked for his location. Then when she got it – it was up to Frank to decide if he still wanted to risk pursuing Zoran or save himself the trouble by handing Zoran off to Interpol.

As for Nikki’s schooling, her daughter ended up solving some of her problems by choosing to go to school in New York. It seems the young lady wanted to save her mom the money she would have had to pay for an out of state school.

And then there was Jamie. He didn’t get the chance to fight in the boxing match although he had been preparing for vigorously for the last 6 days. Instead he gave a newbie an opportunity to make NYPD proud!