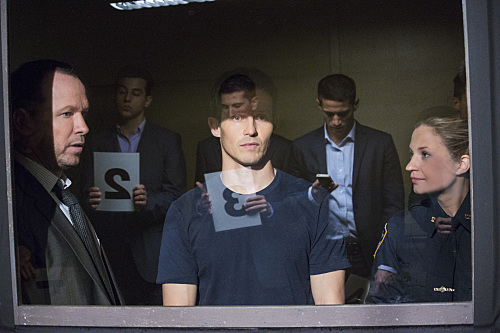 Tonight on CBS Blue Bloods continues with an all new Friday October 24, season 5 episode 5 called, “Loose Lips.” On tonight’s episode a woman’s abusive boyfriend targets Jamie after he intercedes in a domestic dispute. Elsewhere, the press get ahold of an illegal tape capturing Henry’s [Len Cariou] insensitive comments, and Frank [Tom Selleck] must deal with the ensuing scandal.

On the last episode, when Danny was charged with using excessive force, Frank must decided whether to stand up for his son or for the reputation of his police force. Meanwhile, Jamie hit it off with a beautiful doctor after bringing a homeless man into the hospital. Did you watch the last episode? If you missed it, we have a full and detailed recap right here for you.

On tonight’s episode Jamie is targeted by a vengeful thug after he intervenes in his abusive relationship with his girlfriend. Meanwhile, Frank must deal with a political scandal involving insensitive comments made by Henry that were illegally recorded and leaked to the press.

Blue Bloods “Loose Lips” airs tonight at 10:00 pm ET and we will be live blogging all the details. So don’t forget to come back and refresh your screen often for live updates.

On tonight’s episode of Blue Bloods, a simply chance encounter for Jamie with an abused young woman turns out to have had some far reaching consequences that no one in the Regan family could have ever foreseen.

Jamie saw a young woman crying in the park so he offered her help. However the woman ran away before Jamie could get her a ride to the nearest precinct. It was unfortunate situation but it got worse after the same woman, Tina, was later found to have been severely beaten.

Danny was called to the scene and he asked her who about her bruises. Where did they come from and did she at least know her attacker? And Tina said her boyfriend did that to her. He had seen her talking to a cop and wasn’t too happy about it. So she didn’t want to say anything else to the police (even to Danny) in case it upset her boyfriend further.
But she didn’t have to worry about the last part so much – she soon died from her wounds. Hence the only living person Danny had left to talk to was his little brother Jamie. Although Jamie didn’t have enough information himself to fill in the blanks.

Danny then warned Jamie about a possible threat. The boyfriend they’re looking for was allegedly so upset about the cops’ interference that he’s now targeting the officer that dared chose to talk to her – Jamie. And seeing as Jamie is as stubborn as the rest of the Reagans, he refused police protection and restrictive desk duty. He said he wasn’t going to stop doing his job merely because someone was targeting him.

He’s cop after all and having his life threatened is part of the job.

Yet, no one in his family liked hearing that and they’re a family of cops. But it was Henry that had a benefit dinner later the same day and when an old friend asked him about it – he did say “no comment”. And if he had stopped at that then there would never have been a story.

One of the waiters at the event had recorded Henry. And Henry went on to mention to this friend that back in his day he would have sent the streets flooding with cops that were prepared to give anyone a wooden shampoo job. He’s done something like that before when he was the Police Commissioner and yet he didn’t realize that his job well done is what we now refer to as police brutality.

And on the same night Henry ran his mouth off, Jamie was attacked. Someone had set him and his partner up while they were on patrol and that resulted in the cops getting banged prior to escaping a fiery death.

As things stand, Tina’s ex (Danny and Baez found out Tina had actually left him but he refused to take the hint) wasn’t playing around when he told Tina that he was going to go after Jamie. The ex nearly killed two cops and when Danny and Baez eventually found him – he laughed them off as well. It seems everything is a joke to him. And if Tina had lived then she would have returned to her senses and have taken him back.

And though he’s clearly their guy, Erin didn’t have enough evidence to try Mr. Price in open court. Neither Jamie nor Eddie could identify the ex in line-up so he was free to go. And the judge warned Erin about the waters being already muddied by both Henry’s and Erin’s daughter’s public reactions.

Nicky took to twitter to support her great-grandfather. He was being accused of wanting a police state and the person who made that accusation was none other than Nicky’s teacher. So she defended Henry and because of that; the judge on Price’s case had told Erin she need to recuse herself if the DA intends on pursuing an investigation. Her family was too closely tied to this particular case.

Nicky was warned about her behavior before. A different twitter incident that involved one of her teachers cost her admissions to Rutgers. But Nicky and the lovable grandpa just can’t seem to control themselves. So maybe it’s a family trait.

As for Price, he was going to get away with what he did to Jamie and Eddie. The courts had freed him yet at the end of the day Price’s temper got the best of him. He wanted to hurt Jamie. He simply couldn’t let go of a slight and so he found out for himself that the best way to do that was to go after Eddie.

He kidnapped her hoping to use her to punish Jamie and luckily Jamie and his brother arrived on the scene before Price could make an officer disappear. That would have been magic trick no one would have appreciated.

Eddie was fine and because of his own actions – the police finally had enough evidence to convict Price!