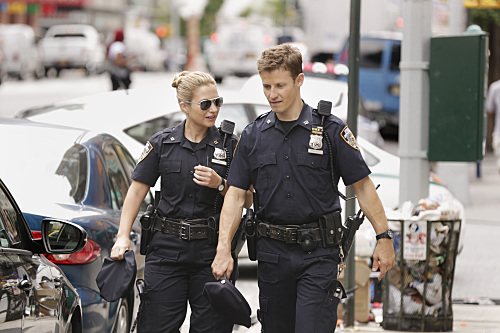 On the last episode, Danny and Baez were temporarily assigned new partners when an officer was outed and his current partner won’t ride with him. Meanwhile, Jamie and Eddie worked on a revenge mission to steal a collar from a pompous detective, and Frank compromised his relationship with the Archdiocese when he spoke out about equality in the police force. Did you watch the last episode? If you missed it, we have a full and detailed recap right here for you.

On tonight’s episode when Danny is charged with using excessive force, Frank must decide whether to stand up for his son or for the reputation of his police force. Meanwhile, Jamie hits it off with a beautiful doctor after bringing a homeless man into the hospital.

Blue Bloods “Excessive Force” airs tonight at 10:00 pm ET and we will be live blogging all the details. So don’t forget to come back and refresh your screen often for live updates.

Danny and Baez were heading back into the office when he wanted to stop for some coffee. However, because of their time, they came upon a hold up at their local corner store.

The suspect immediately gave chance and Danny was quick on his tail. His partner, Baez, on the other hand suffered a setback. She was pushed down and though she was able to get up on her own and even join Danny in the pursuit – she was still a few feet away from her partner and the suspect.
So Baez never got the chance to see what truly happened between her partner and the suspect. All she knows is that suspect fell out of a window and that he claimed it was police brutality. Though Danny didn’t lay a hand on him. He did threaten to throw the young man out of the window and that was only if the suspect failed to cooperate with him by not placing his hands up against the wall.

The young man had actually taken it upon himself to go through the window by himself without anyone’s assistance. He did it on the off chance of surviving in order to claim police brutality. Not to sound harsh but he’s a black young man and the officer was a white detective. The media and the usual civil right patrons wouldn’t have long to start speaking up for him. And that meant no one was going to wait for the case to actually be investigated.

Plus Danny’s name isn’t going to help him out of this one. As a matter of fact being a Reagan means he’s going to crucified.

His father is the Police Commissioner and if the commissioner can’t control his own son then maybe he shouldn’t be in office. That’s how the media is going to work the story. But Frank didn’t want to come out and vilify Danny just to win some points with the Media. The only thing he wanted to do was hear from Danny what really happened.

Though, deep down, he never thought his son could do something like throw a man out a window. So Frank is conflicted man. His own men want him to distance himself from Danny. And there’s not a lot of people speaking up in favor of his son.

There was an eye-witness to the incident. It was a little boy but his parents are illegal immigrants. Hence they didn’t want to draw attention to themselves. When Danny got around to checking out the little boy he remembered telling to go back inside – the family had already moved.

The little boy’s name was Ernesto ad he later conveniently ended up in the hands of Rev. Potter. The same man that’s leading charge against Danny with massive public protests.

Rev. Potter has always hated the police. He considers them all to be racist and so he relishes all the times he could get back at them. And with Ernesto in is his custody – the little boy suddenly started to back up the story he’s recently been selling. Ernesto is now claiming he saw Danny throw that young man out the window.

And so Rev. Potter agreed to a private meeting with Frank. He told the police commissioner that as long as Danny was fired – he called everyone else off.
As if Frank would do that to his son. Instead of complying with blackmail, he told Danny and Erin about a certain witness tampering case that they needed to investigate. And using proper police procedure they were able to draw up the necessary paper work required on getting Ernesto into their custody.

Funnily enough, after the NYPD assured his family that they weren’t going to be deported, his story about what he saw changed back into the truth. He told officials and the media that Danny never laid a hand on the suspect he allegedly threw the window. And afterwards, Frank chose to let the good

Reverend maintain face. In return for his silence of course. The man needed to learn when to be silent!

Someone who talked in favor of Danny back when he was being accused was the only person brave enough to say what they were all thinking and that was Danny’s Sargent. So Frank chose to promote that man. He needed someone higher in the ranks that wasn’t afraid to voice his honest opinion.

As for the latest saga on Jamie and his somewhat confusing relationship with his partner, she got jealous when he started to date a beautiful young doctor. So though she’s not owing up to it yet – some part of Jamie finally knows that she does care about him. Because for a while it looked like she was just fine being friends.