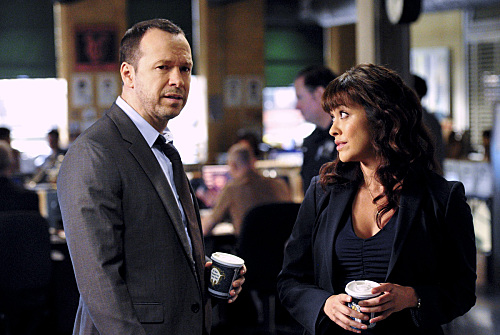 Tonight on CBS Blue Bloods premieres with an all new Friday October 10, season 5 episode 3 called, “Burning Bridges.” On tonight’s episode Danny and Baez temporarily get new partners because an outed cop’s partner won’t ride with him. Elsewhere, Jamie and Eddie try to snatch a collar from an arrogant detective; and Frank’s statement on equality in the police force alienates the Archdiocese.

On the last episode, when a fellow officer was ostracized for testifying against her partner, Jamie stood up and volunteered to ride with her for a week, facing the wrath of his own partner and fellow cops. Meanwhile, Erin and Danny clashed when a settled case became a new homicide. Did you watch the last episode? If you missed it, we have a full and detailed recap right here for you.

On tonight’s episode Danny and Baez are temporarily assigned new partners when an officer is outed and his current partner won’t ride with him. Meanwhile, Jamie and Eddie work on a revenge mission to steal a collar from a pompous detective, and Frank compromises his relationship with the Archdiocese when he speaks out about equality in the police force

Blue Bloods “Burning Bridges” airs tonight at 10:00 pm ET and we will be live blogging all the details. So don’t forget to come back and refresh your screen often for live updates.

Tonight started off very bloody for Jamie and Eddie. They were called to a domestic disturbance case and because a woman involved was bleeding out too badly – Jamie had to let the suspect go. However the suspect overheard the officers discussing taking the victim to a hospital around the corner and had the nerve to follow them.

He then tried to attack all of three of them outside of the hospital. Luckily, Jamie was able to fight him off but he was left bleeding from the incident. The blood was coming from a head injury and so Eddie wanted him to have it looked at. Especially as they were right near a hospital. A couple of detectives had already arrived on the scene and they were offering to take the suspect in. So there was no really no way for him to turn down such a gracious offer.

Yet a few hours later, Jamie and Eddie realized the detectives stole their case. The elevated officers claimed the suspect was their collar and didn’t want to give a couple of guys on the beat an attempted murder case.

It was a case of interoffice backstabbing at its worse. But Danny had to deal with his own fair share of it as well. A new case of his inadvertently outed one of his fellow detectives. The poor guy happened to be a witness to a gay bashing and though he didn’t want to put his name to the case – Danny ultimately convinced him to do the right thing.

And the right thing meant Fuentes ended up losing his partner. Once the other guy found out about Fuentes’s sexual orientation he no longer wanted to work with him. Which meant Danny and Baez had to split up in the meantime in order for a new partner to be found for Fuentes.

So Danny was stuck with homophobe investigating a gay bashing and Baez was left with a man that basically lost everything all in one week. He lost his partner and his father essentially told him he was dead to their family.

Another result of the gay bashing case is that it dawns an unfortunate light on Frank’s religion. Franks has never hidden the fact he’s a good catholic and so people are now questioning what he’ll do to get Martin, the victim’s, killers. Martin was beaten so badly he died on the operating table and with his nomination for Man of the Year Award coming from a cardinal of all people – Frank has to walk a fine line between church and state.

Frank said something during a conference that upset the cardinal. He admitted to finding fault with the church’s stance on homosexuality. And afterwards the cardinal asked him to make a public apology. Even if the church still needs work – it’s not Frank’s job to point that out.

So Frank has to find a way to both apologize and without that apology coming off as condoning the gay bashing. And while he’s doing that Danny’s investigation into attackers revealed one of them has a personal connection to the Chief of police in a small New Jersey town. Like being his son.

The New Jersey police wanted to cover it up so they stalled on their end and simply pretended to be assisting Danny. But Danny in turn tricked them into letting down their guard and so when the assailants went back to traveling into the city – Danny and his fellow detectives arrested them moments after they crossed state lines.

And the arrest helped mend fences between Fuentes and his old partner. They missed each other after being stuck with someone else over the last couple of days.

As for Frank, he never made that apology so he’s not going to be winning the award this year nor is he going to be helping out a nun that came to him for assistance in keeping one the catholic schools open. However the nun forgave him for losing out his chance to ask for favor from the cardinal. Before she joined the church; she was a lesbian.

And Jamie got back at Detective Hoffman. When given the chance, he nearly stole a collar off of the detective but then he made a big show of being the better man by allowing the detective to claim this one.
There was really no better revenge!