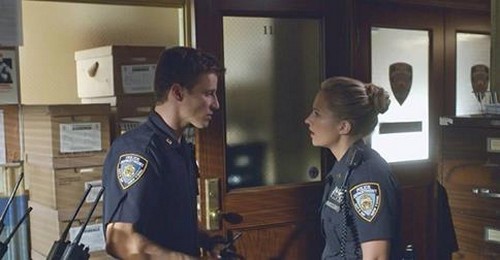 Tonight on CBS Blue Bloods premieres with an all new Friday October 3, season 5 episode 2 called, “Forgive and Forget.” On tonight’s episode Jamie refuses to shun a cop who testified against her partner, earning him disapproval from Eddie and other officers. Elsewhere, Erin and Danny get into a dispute when a closed case leads to a new murder; and a sports celebrity visits Frank.

On the last episode, as Danny and Baez escorted confiscated drugs to a remote location for incineration, their convoy was attacked and Baez was seriously injured, leaving Danny to track down the drug cartel responsible. Meanwhile, Frank had to carefully navigate personal and political waters when an exemplary lieutenant’s actions cause controversy for the NYPD. Did you watch the last episode? If you missed it, we have a full and detailed recap right here for you.

On tonight’s episode when a fellow officer is ostracized for testifying against her partner, Jamie stands up and volunteers to ride with her for a week, facing the wrath of his own partner and fellow cops. Meanwhile, Erin and Danny clash when a settled case becomes a new homicide.

Blue Bloods “Forgive and Forget” airs tonight at 10:00 pm ET and we will be live blogging all the details. So don’t forget to come back and refresh your screen often for live updates. While you wait for the recap, check out a sneak peek of tonight’s episode below!

RECAP: Not only does Jamie have to struggle with his attraction towards his partner but he also has to find a way to wrap his head around her somewhat skewered moral code. Jenko has been hazing one of her fellow officers. Cara had ratted on her partner after he killed a suspect in custody and now no precinct wants to touch her.

They all considered her to be the villain of the story and not her partner. You know the officer that killed someone using an unauthorized procedure such as a choke hold. Yet Jamie doesn’t see life so blue and blue. He thinks Jenko is out of line for the things she’s been saying and if it was them – he told Jenko he wasn’t going to cover for her. At the end of the day, Jamie actually cares about the job and he doesn’t take it too kindly when someone abuses the badge.

And his father is the same way. A case of a cop shooting another cop came across his desk. The one remaining officer still standing says it was an accidental discharge and seeing as he’s few months away from retiring with honors – he asked Frank to keep it that way. However Frank told him he couldn’t interfere with an investigation and that was a lie.

Frank had interfered with Cara’s situation. He was the one that had convinced her to testify against her partner and later when even the grand jury acquitted the other officer – Frank had fired him anyways. He knew what kind of officer he wanted on his squad and it wasn’t a known killer. So everything that’s happening to Cara is partly Frank’s fault.

Jamie later decided to take Cara under his wing. He figured if he stepped in then maybe that would stop the underhanded bullying. And so he volunteered to be her partner. Much to Jenko’s disgust!

Meanwhile Danny had gone to Erin and asked her for her help with a case. This particular case has haunted him for the last 8 years and it finally reached a sad conclusion. A young girl was injured during a drive-by shooting and in the following years she had spent the rest of her life in a coma. And now that she’s passed away from injuries she sustained during the shooting – her family has asked Danny “where was justice for their daughter’s death?”

The shooter was a kid at the time and he had gone to a juvenile detention center but eventually he was released. It was only a shooting offence after all. Yet Danny wanted Erin to reopen the case and try the young man for murder. Erin on the other hand wasn’t so gun-ho. She spoke to Damien and he’s changed since the shooting.

He’s no longer that reckless youth hanging with the wrong crowd. He’ rehabilitated. Once he left juvie he earned his High School diploma and then went on to college. Even as the siblings were haggling over details, Damien was running a very successful center for at-risk youths in his old neighborhood. So Erin can see that Damien deserves a second chance. And it’s not her fault that Danny is still stuck in good cop/bad criminal mentality.

He doesn’t believe in rehabilitation. And when the girl’s grieving father targeted Damien – Danny felt guiltier about the shooter than he did about the victim.

Erin thankfully was able to negotiate a deal with Damien. All she needed from him was for him to say he didn’t see his shooter. Without his eye-witness account a good man that had wrong decision didn’t have to go to jail. And Damien complied with that because he know what it’s like to be in that position.

That was probably wasn’t very ethical of Erin but her newest boyfriend is currently trying out to be her boss. If he gets the job – there’s going to be a lot of things Erin will be able to get away with.

Jamie and Cara as a team wasn’t seen as a good thing around their precinct. Their fellow officers took Jamie’s decision to partner her as an act of betrayal. And so when the duo got caught in a shoot-out – no wanted to take their calls for backup.

Jenko eventually showed up though. She and her partner were nearly across town yet they were the only ones that came when Jamie and Cara needed them. And Cara even took a bullet meant for one them. It seems that despite everyone’s assumption that she was bad cop for not backing her partner – she was the only one willing to risk her life for someone else.

And the other cops just needed to be told that so Jamie made sure the word was spread around. If anyone had something against her then they had a problem with him. And, though it took them awhile, some of the officers did come to respect Cara for her actions.

As for Frank, he learned to be more lenient.