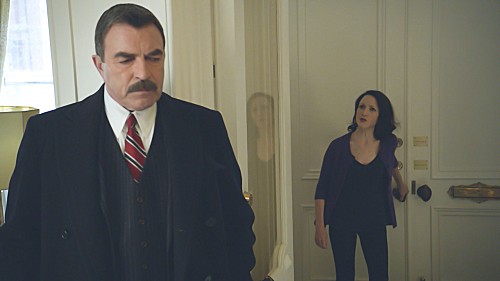 Tonight on CBS Blue Bloods continues after the winter mid-season hiatus with a new episode called, “The Bogeyman.” On tonight’s episode Frank pulls out all the stops to assist in getting the drugs off the street.  Did you watch the last episode before the hiatus?  We did and we have a full recap right here for you.

On the last episode before the hiatus Danny and Baez investigated a local bombing, but met with tension and resistance from the community during the investigation. Meanwhile, Frank had to deal with the political fallout when a man punched an officer who was overly aggressive in his questioning.

On tonight’s show when Danny learns from Nicky that there’s a deadly new brand of heroin hitting the streets, he begins an all-out manhunt for the distributor. Meanwhile, Frank pulls out all the stops to assist in getting the drugs off the street.

Blue Bloods “The Bogeyman” airs tonight at 10:00pm ET and we will be live blogging all the details. So don’t forget to come back and refresh your screen often for live updates. While you wait for the show –  let us know what you think of the season 4, so far!

Tonight’s episode of Blue Bloods opens with Danny paying his friend Carmen a visit in jail cell. When she got picked up for bailing on a restaurant tab, she called Danny for help. She is a drug-user, and Danny wants intel on some drug dealers. She agrees that if he lets her go she will call him with names and addresses of dealers.

Nicky, Erin’s daughter is at a party in a loft with over a hundred people. Someone has overdosed and all of the kids start running out of the party. Nicky stays behind. Two kids are trying to throw away all of the drug evidence. Nicky pockets one of the baggies before they throw it away, and calls 911. She tells the dispatcher that her name is “Jane Doe.”

Frank is arguing with other officers. He wants to find the source of all of the “bad dope” that has been causing overdoses. They don’t think Frank is looking at this correctly, they are drug users, not victims, they take a chance of overdosing when they shoot up.

The department holds a meeting, they have 19 dead from overdoses. They want to find the “big fish,” where the dope is coming from. Nicky shows up at the meeting and Danny takes her aside to talk to her. She confesses that she was at a party and two kids overdosed. She gives him the baggy that she pocketed from the party, it says “Boogeyman” on it. Danny is happy that she found “The Boogeyman” but takes her home, and tells her she has to tell her Mom what happened at the party.

Jamie and Abigail are walking down the street and walk directly into a purse-snatching. The teen girl named Morgan, was trying to steal a woman’s purse. The woman insists on pressing charges, so they arrest Morgan.

Danny receives a phone call from a cop at the hospital. His friend Carmen overdosed and died. He tells the cop to send him Carmen’s phone for evidence. They pull up the files on Carmen’s phone and find out she has been buying her drugs online, from a website. While Danny and the other officers are looking at the website that she buys drugs from, it is shut down. Now, they are back to square one on finding “The Boogeyman.”

Frank pays the judge a visit, he wants a favor from him. He wants her to call all of her “important friends” and collect enough cash to orchestrate a “buy back.” He wants to buy all of “The Boogeyman” off the streets before anyone else dies from it. The judge tells him how dumb his idea is. But he reminds her that “lives are at stake.” The judge says she will work on it, but she can’t promise anything.

Abigail pays Morgan a visit in her cell, she has ran a background check and found out she is under 18 and has already been busted for underage drinking. Morgan doesn’t want any help, but Abigail wants to “cut her a break,” because she reminds her of herself.

Danny pays Lacey a visit, the girl that was trying to throw away all of the drug evidence at the party Nicky was at. Lacey’s parents are completely clueless, they think that she “doesn’t do hard drugs.” Danny threatens to arrest her, and she spills the name of her drug dealer. Lacey confesses that her drug dealer is named Bruce, and he is a physical therapist.

Frank and the commissioner hold a press-conference regarding “The Boogeyman.” The reporters ask him if he is “orchestrating a buy-back.” Frank refuses to answer their questions.

Nicky and her Mom are arguing over what colleges she will be applying to. Nicky is upset because her Mom is not letting her go to any “party schools” and she wants her to go to a Catholic School. Erin is trying to weed out the party-schools since Nicky was at a party where kids overdoses. Erin storms off.

Danny and Det. Baez head to Bruce’s (Lacey’s dealer’s) house, but he is already dead. It looks like he overdosed off from his own friends. They find a suicide note, “To my friends and family I am sorry. To my DSS brothers I am ashamed at what we have done.” Danny calls a man named “Jimmy” from Bruce’s phone, who appears to be his business partner. Jimmy thinks he is talking to Bruce, and agrees to come over to Bruce’s house. Baez wants to call for back-up, but Danny says “no.”

Abigail and Jamie head back to Morgan’s cell to try to reason with her before she gets booked. Morgan still has an attitude and refuses to cooperate. When Jamie cuffs her, Morgan panics, she doesn’t want to go to see the judge.

Det. Baez and Danny find a stash of “The Boogeyman” in Bruce’s apartment while they are waiting for his friend Jimmy. They find a picture of Bruce with “Dark Side Security,” which is what DSS stands for. They are contract security forces, and have access to medicine, which is how they are making the drugs.

Frank pays a visit to the judge, and is not happy that she leaked she idea of his “buy-back.” The judge denies the allegations, she says she talked to the health department and the mayor’s office, and they most likely are the ones that leaked the “buy-back.” And, she calls him a “son of a bitch.”

Jimmy and Det. Baez have met Jimmy, and handcuffed him to his dead friend Bruce. They threaten to inject his arm with a syringe full of “The Boogeyman” if he doesn’t give them any information. He says that the “motherload is mobile. He doesn’t know exactly where all of the drugs are because they are in a moving vehicle.” They cuff Jimmy and head outside to take him to the station, but they see a van pealing out of the parking-lot. Danny shoots at the van, and the passengers shoot back. Danny, Baez, and Jimmy run back inside the building. Danny leaves Baez in the building with Jimmy, and Danny runs back outside to shoot the driver of the van so he can’t leave with all of the drugs. The other two passengers are inside, and shooting at Baez. She takes one of the guys out and then has to reload, Danny runs back inside in the knick of time, and shoots the second gunman.

The judge has let Morgan go, Abigail and Jamie agree to drive her home. Abigail thinks she is doing her a huge favor, and making a difference in her life. She thinks that since they cut her a break, Morgan is going to change her ways.

Thanks to Danny and Baez’s hard work, and Jimmy’s snitching, they have gotten all of “The Boogeyman” off the streets. Frank is still trying to determine who leaked the information about his “buy back.”

Jamie and Abigail are waiting at a rest stop for Morgan to come out of the bathroom. Abigail thinks that she is making a difference in Morgan’s life, but Morgan sneaks out of the back door and hops in a corvette with two guys and leaves. Jamie laughs at how clueless Abigail is.

It’s time for the Reagan’s family dinner. Nicky reveals to Frank that she wants to go to California to go to college. Her Mom is upset that she “wants to be away from them.” Frank doesn’t see why anyone would “want to be away” he has lived in the same house his entire life, and worked the same job his entire life, and he is perfectly okay with it.