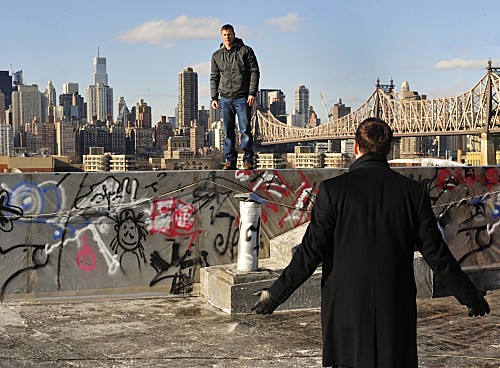 Tonight on CBS Blue Bloods continues with a new episode called, “Unfinished Business.” On tonight’s episode Frank is caught off-guard during a press conference.  Did you watch the last episode before the hiatus?  We did and we have a full recap right here for you.

On the last episode when Danny learned from Nicky that there’s a deadly new brand of heroin hitting the streets, he began an all-out manhunt for the distributor. Meanwhile, Frank pulled out all the stops to assist in getting the drugs off the street.

On tonight’s show Danny and Baez must track down an Army veteran who Danny thinks is suffering from PTSD. Meanwhile, Frank is caught off-guard during a press conference by a woman who is seeking justice for her murdered daughter.  Karen Allen guest stars as Betty Lowe, the woman seeking justice for her daughter’s murder, and Doug E. Doug guest stars as Lamar Roberts, a past witness in the case.

Blue Bloods “Unfinished Business” airs tonight at 10:00pm ET and we will be live blogging all the details. So don’t forget to come back and refresh your screen often for live updates. While you wait for the show –  let us know what you think of the season 4, so far!

The episode begins with Danny discussing the upcoming camping trip over breakfast with Linda and the kids. Jack asks him questions about his job and his time in the service for a family history project, when Danny is interrupted by a call from work. He leaves to go work a case. Commissioner Reagan holds a press conference about a recent drug ring the NYPD took down. A woman in the audience interrupts to ask the Commissioner why her daughter’s murder has not been investigated. She accuses him of not doing anything to help her daughter before she is escorted away by officers.

Danny arrives at the scene of a crime at the Army base where they find a woman badly beaten. Danny asks her who beat her, she says it was her husband. She asks Detective Reagan to find her son, Tommy, who is supposed to be at school. She is worried that her husband will take Tommy, she is also afraid of what her husband will do to the child. The mother’s fears are confirmed when they learn that Tommy isn’t at school. Danny is confronted by a military officer who feels Detective Reagan has overstepped his bounds. Danny tells the officer that he isn’t leaving until the boy is found.

Frank and the Commissioner discuss Michelle Lowe’s murder case. Frank tells the Commissioner he’s received a complaint from military personnel about the way Danny is handling the case at the military base. The Commissioner calls Danny to step back in line regarding the case. Danny and Maria discuss a picture the missing boy, Tommy drew in art class the day before. It’s a picture depicting his father shooting Tommy and his mother. Jack talks with Pop about their family military history, including Pop’s time in the Korean War.

Meanwhile, the Commissioner visits Mrs. Lowe, the mother of Michelle Lowe. She tells him that the man who is in jail for Michelle’s murder is not the killer. She believes Michelle knew her killer and wants the Commissioner to re-open the case. Danny interviews a sergeant about Corporal Russell. Danny wants to know why the Army did nothing to help Corporal Russell with his mental health issues following his deployment. Later, Maria tells Danny that Corporal Russell was paying to see a private doctor. While they are at the station, Danny receives word that Tommy, the missing child, has called 911. They listen to the recording. While Tommy is on the phone with 911, his dad discovers him. Danny and Maria hear Tommy cry out “No!” just before the line goes dead. The need to find Tommy becomes more urgent.

Erin and the Commissioner discuss Michelle Lowe’s murder case. She tells him there was an eye witness who identified Sam Lundy, the man convicted for her murder. The Commissioner tells her to find the witness so that he can interview him. Later, Erin interviews the witness, who is in jail for armed robbery. The witness, Lamar, tells her he saw a man dumping a body in a dumpster. She asks Lamar if he is sure the man he saw was Sam Lundy, and after a bit more prodding, he admits he didn’t really the man’s face. Lamar tells her that he was pushed by the detective working the case to identify Sam Lundy out of a line up. Jack tries to ask Danny more about his time in the service, but it leads to an argument. Danny and Linda discuss Danny and Jack’s argument. She feels Danny’s taking his anger out on their son.

Later, Danny talks to Corporal Russell’s private doctor, whom Danny used to see, as well. The doctor tells Danny that Russell still operates as if he is at war. After discussing Corporal Russell a bit further, the doc asks Danny how he’s doing. The doctor encourages Danny to reach out for help, if he needs it. Erin tells the Commissioner that Lamar said he was coerced by a detective to identify Sam Lundy. She also tells the Commissioner that she visited Betty Lowe, and what she had to say was compelling. Erin thinks they should consider re-opening the case.

Danny talk with Corporal Russell’s wife in the hospital. She give them a possible friend of Russell’s to check out. Danny visits the friend, who isn’t very willing to help the police find Corporal Russell. Danny and Maria decide to stake out the friend’s house for awhile, believing he will eventually lead them to Corporal Russell and Tommy. They spot the friend running out to his RV parked in the backyard. Danny and Maria confront him, the friend tells the detectives that Tommy and the Corporal are in the RV. They search the RV and find a letter to Mary Ann, the Corporal’s wife, but the Corporal and Tommy are nowhere to be found. The letter leaves an ominous sign.

Danny pressures Colonel Russell’s friend to help him find Tommy and the Corporal. He gives him the number of a prepaid phone Corporal Russell is using. Meanwhile, Jack presents his family history project to his class. The whole family is there to see the presentation. Danny is moved by Jack’s speech. Later, at dinner, Danny and the family discuss the Colonel Russell case. Jack asks Pop, the Commissioner, Danny, and Jamie if they have ever been shot at. They have. Danny’s dinner is interrupted with a break in the Russell case.

The Commissioner visits Betty Lowe at her apartment. He tells her that the eye-witness has recanted his original testimony and that there are other discrepancies in the case. The Commissioner tells her there is enough evidence to re-open the case, but that if he does, and Lundy is proven not guilty of Michelle’s murder, he may walk for the three murders he did commit. She agrees that can’t happen, and he promises to continue looking into her daughter’s case and to keep her updated if there are any new developments. Later, the Reagan men depart on their camping trip.