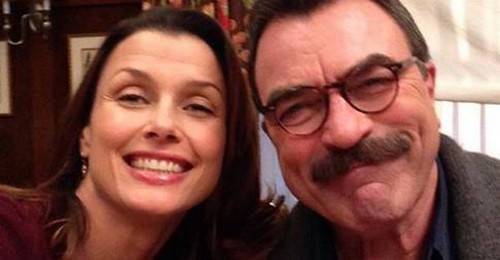 Tonight on CBS Blue Bloods continues with an all new Friday November 7, season 5 episode 7 called, “Shoot the Messenger.” On tonight’s episode an on-air interview goes badly for Frank [Tom Selleck] when he’s blindsided by the interim district attorney. Elsewhere, Danny [Donnie Wahlberg] and his new boss deal with a drive-by shooting, and they take contrasting approaches to the investigation.

On the last episode, Frank and Danny were determined to put away an international felon who repeatedly managed to walk away from murder charges, but they struggled to come up with the necessary evidence to earn a conviction. Meanwhile, Erin debated going into private practice when she looked into college costs for Nicky, and Danny butted heads with his new boss. Did you watch the last episode? If you missed it, we have a full and detailed recap right here for you.

On tonight’s episode as per the CBS synopsis, “Frank is blindsided during an on-air interview when he and the interim District Attorney disagree over an issue. Meanwhile, Danny’s new boss rides along with him, but their methods and personalities clash as they investigate a drive-by shooting.”

Blue Bloods “Shoot the Messenger” airs tonight at 10:00 pm ET and we will be live blogging all the details. So don’t forget to come back and refresh your screen often for live updates. While you wait for the recap, check out a sneak peek of tonight’s episode below!

Robert McCoy (Erin’s secret beau and the interim District Attorney) and Frank ended up going head to head on tonight’s new episode of Blue Bloods. Both men were brought in to do an interview on the safety of the city and while they were supposed to be on the same side – McCoy came out of left field when he said he disagreed with Frank’s policy. Apparently Rob wanted to only try cases that seemed feasible.

Meaning he wasn’t going to go after people brought in on small drug charges. He actually he would refuse to prosecute those people even if the police kept arresting them. And so, on live TV, Frank not only disagreed with him but he then went on to imply that Rob didn’t as much about policy as he claimed.

And Erin saw it all. She had watched the morning program and later she had gotten into Rob’s face. It was one thing to ambush her father/ the Police Commissioner and it was quite another to discuss new policy without informing any of his ADAs. Or did he forget he had those? As a direct underling, Erin and her coworkers had right to know what he was planning before he announced it to the world. He ticked off her entire department with his little stunt and has won no grounds with what he said during his interview.

Afterwards, Erin had to go to her father and tell him about her personal relationship with her boss. With Rob acting the way he is – she couldn’t take the risk of having her father find out from anyone else.

Meanwhile Danny has a new case and also a new partner. His new Lt. “volunteered” to be his partner yet Danny knew he couldn’t leave her behind even if he wanted. So, technically, they had a new case. A shooting in the park resulted in the death of multiple victims including a young mother who just happened to be there with her baby. Her ten month old survived the fall out but the detectives on the case later found out the shooting had nothing to do with a drug deal gone wrong.

It seems the shooters were sent to that park intent on killing the young mother and her baby. Although it was a drug dealer that ordered the hit. Ramos, the drug dealer, had done the math and he had found out that he wasn’t the father of the baby. So he put a hit on mother and child.

However, a hit just doesn’t disappear into thin. Especially when one of the intended victims is still alive. Hence the gang squad had to be brought in and luckily Ramos was soon caught on tape arranging the hit.

But then that left the baby to think about. Her biological father had gone on to kill himself because he didn’t want to raise his daughter out of fear she will one day grow up to be like him. And her mother was dead. So in cases like hers, the baby would have been put into foster case where she’d probably have to stay for the next two years.

Though, in the end, the baby got lucky. Danny had asked the social worker what was going to happen and he reassured that someone had already put in an application to adopt to the baby. It looks like his tough on her officer, Lt. Carver, does have a soft spot. At least when it comes to children because she’s the one adopting the baby.

Danny was thinking about trading precincts but once he found out what Carver was planning on doing – he changed his mind and decided right then and there that maybe they can work together.

And as for Frank and Rob, Rob eventually humbled himself and made a public apology. He was too old to be showboating and he realized insulting the police Commissioner was probably not the best way to go. In doing this, he repaired the relationship between the District Attorney’s office and the Commissioner while also placating Erin. It wasn’t good for him to have his girlfriend.

As for Jamie, he helped solved a murder so the next question should be – when is he going to be promoted to detective? It’s been over four years since he’s been on the job!