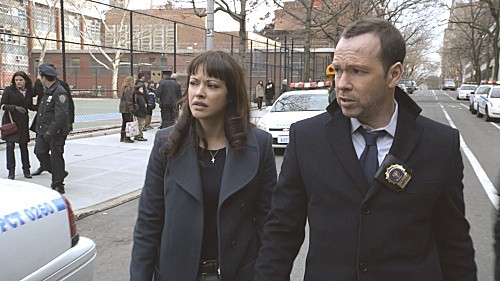 Tonight on CBS Blue Bloods continues with a new episode called, “Open Secrets.” On tonight’s episode Frank butts heads with Inspector General Kelly Peterson when he refuses to divulge information about a program that allows Frank to oversee intelligence officers abroad.  Did you watch the last episode before the hiatus?  We did and we have a full recap right here for you.

On the last episode Danny and Baez investigated the murder of Tiffany Lamp, a popular drag queen from a reality television show who was found murdered in a local park. Meanwhile, Erin reexamined a drug case scheduled for trial after she was abducted by the accused man’s mother.  Donnie Wahlberg directed BLUE BLOODS for the first time.

On tonight’s episode when Danny and Baez investigate the kidnapping of a young girl who disappeared after school, it brings back difficult memories for Danny, who worked on a similar unsolved case many years ago. Meanwhile, Frank butts heads with Inspector General Kelly Peterson when he refuses to divulge information about a program that allows Frank to oversee intelligence officers abroad. Criminal defense attorney Bruce Cutler, known for representing high-profile organized crime figures, guest stars as himself.

Blue Bloods “Open Secrets” airs tonight at 10:00 pm ET and we will be live blogging all the details. So don’t forget to come back and refresh your screen often for live updates. While you wait for the show –  let us know what you think of the season 4, so far!

Danny and Baez were called out to investigate the disappearance of a school girl named Jenna. The child in question usually walks home every day with her friend but on this day she got a ride home. The crossing guard saw her and didn’t think anything was wrong seeing as the little girl went into the car willing. Yet the child never made it home.

Another unusual occurrence is that the case is similar to a cold case Danny worked on nearly a decade ago. The father from the cold case, Joseph Scott, had heard about the recent disappearance and had immediately gone to the precinct to see Danny. Although it’s wrong of him and apparently not the first time; the man couldn’t help get his hopes up. Joseph feels if they can finally catch this kidnapper then maybe his daughter will be returned to him.

Danny tried to dissuade him and it was no good. Joseph hasn’t given up hope and he’s put his life on hold just waiting to hear about his daughter. Which only serves to exasperate Danny. He feels like it’s his fault that Joseph is doing this to himself and that why he might have been much harsher to Jenna’s parents than what was called for. Baez had to take him to task for it and sadly the Wallaces didn’t warrant considerations.

During the investigation, Danny had asked Jenna’s parents if there was anyone with a grudge against Jenna. Hey said no but Jenna’s best friend said the girl’s stepfather didn’t like Jenna. Neither Baez nor Jenna even knew Mr. Wallace wasn’t Jenna’s biological father. So they looked into the dad and found out that his first marriage broke up because of domestic violence. When the first wife was asked about kids though she explained that her former husband didn’t like them. He felt kids only got in the way.

Doesn’t seem like it makes sense seeing as he then married a single mother. When the detectives continue to look into him they then find his company rented the same type of car that Jenna was last seen getting into. Yet all of this evidence amounts to nothing. Mr. Wallace has a perfectly legitimate alibi.

Its tough facing a frustrating case. Not even Erin is exempt from wanting to lose it. Her latest case involves a woman by the name of Diana Del Rio arraigned for assault. This woman has a long history of mental illness and has admitted to being off her meds during the assault. So Erin tried to arrange a plea agreement and got turned down for it.

Diana’s lawyer is a big shot and he feels like he can get the charges dismissed using his client’s mental illness. Erin knows it’s hard to prove that type of case in court but she couldn’t talk the other lawyer out of it.

Going to court however proves to be harder than she thought. Her doctor was supposed to look over the case and give an unbiased opinion. Something he would have been better at if he did more than glance at Diana’s file. Yet he didn’t and still he went to court and told the judge that Diana was mentally fit to face the results of her actions. Erin knows that’s a lie.

She tried to talk to the good doctor about it and he sort of called her an idiot on the subject. He’s the one that has twenty plus years of experience. So he doesn’t like to be questioned on what he knows he’s good at.

Erin has to deal with a pompous ass only to then return home where she finds her daughter was making good use of her absence. Nikki wanted to fool around with her new boyfriend when her mother interrupted them. Erin tries to tell her to be cautious but Nikki doesn’t want to hear it.

The same way Frank doesn’t want to hear it. Inspector General Kelly Peterson wants answers to an overseas terrorist task force that Frank knows about. Although just because Frank knows about it doesn’t mean he thinks it should be given to the general public. If he keeps what’s going on overseas from both the mayor and his second command then what makes Kelly think he would easily share with a committee.

She tried to talk him around and when that didn’t work she came close to subpoenaing him. Frank had gotten way too close to facing jail when Kelly threw him a life line. Because he wouldn’t consent to a monthly meeting about the program so she agreed to let him check in with only one other person instead of a full fledged meeting.

Frank nominates her for the position. Wonder how she’ll be able to talk that over with her superiors seeing as she was after all the one championing a freedom to information!

Erin was right about her doctor. He’s a hack. He signs for jobs consulting just to grab attention otherwise he doesn’t actually care about any of the cases. Erin found this out after she took her case to two other doctor and they both agreed that Diana shouldn’t be held accountable for her actions.

With the information she has now, Erin warned the doctor that he would never be consulting again. Especially once she sent out what he did in her case to everyone else in the D.A’s department. This doctor is done being a showman.

It pays to keep looking for the truth than to just settle. Danny was close to giving up with his case when Joseph stopped by with all of his own evidence. Stuff he found out himself and other things several private detectives helped him with. And Danny is glad he did. There was something useful in the box.

A photo of his daughter at the time showed up something interesting. There was a female custodian at the school and she loves to make barrettes. So much so that she had even given one of them to Baez. That’s what helped it stick out to the detectives. The custodian was the last person to see Jenna and it also looks like she happened to have given Joseph’s daughter a barrette as well.

They go over to her place expecting to question her when they found a locked door inside of her residence. Danny knocked on it asking if anyone was there and got a girl’s voice yelling “help me” in return.