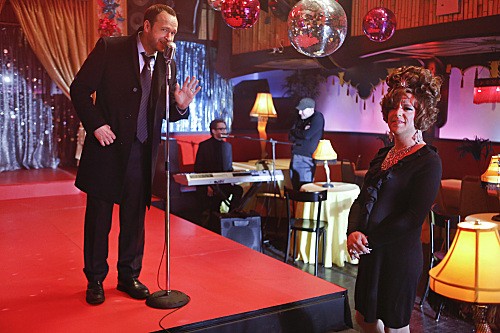 Tonight on CBS Blue Bloods continues with a new episode called, “Manhattan Queens” On tonight’s episode Danny and Baez investigate a drag queen’s homicide. Elsewhere, Erin takes a second look at a narcotics case after the accused man’s mother kidnaps her.  Did you watch the last episode before the hiatus?  We did and we have a full recap right here for you.

On the last episode Danny and Baez must track down an Army veteran who Danny thinks is suffering from PTSD. Meanwhile, Frank is caught off-guard during a press conference by a woman who was seeking justice for her murdered daughter.  Karen Allen guest starred as Betty Lowe, the woman seeking justice for her daughter’s murder, and Doug E. Doug guest starred as Lamar Roberts, a past witness in the case.

On tonight’s episode Danny and Baez investigate the murder of Tiffany Lamp, a popular drag queen from a reality television show who was found murdered in a local park. Meanwhile, Erin reexamines a drug case scheduled for trial after she is abducted by the accused man’s mother.  Donnie Wahlberg directs BLUE BLOODS for the first time.

Blue Bloods “Manhattan Queens” airs tonight at 10:00pm ET and we will be live blogging all the details. So don’t forget to come back and refresh your screen often for live updates. While you wait for the show –  let us know what you think of the season 4, so far!

Blue Bloods kicks off tonight with Frank Reagan giving a speech to room full of law professionals from all over the tri-state area for the annual symposium.

Danny and his partner are hiking through the woods to a crime scene. A hiker found a body in the woods, partially decomposed, it looks like it has been there at least a month.

Erin and her daughter Sami are walking down the street, Sami heads off in one direction to catch the bus for school, and her Mom jogs off in the other direction for her morning work-out. A creepy white van is clearly following her down the street. She cuts down an alley, and someone throws a bag over her head and snatches her.

Erin wakes up in the back of the van, an elderly woman is sitting in the back of the van staring at her. The woman introduces herself as Doris Cooper, she needs help with her son Timothy Cooper, who has been in jail for two and a half years without a trial for a crime he didn’t commit. Erin reminds her that her son was charged with second degree murder and possession with the intent to sell. Doris explains that she is dying of cancer, and the marijuana was for her. Doris gives Erin a piece of paper with address on it. She tells Erin to have her arrested for kidnapping if she wants, Doris doesn’t care if she dies in prison, but she wants Erin to help her son Timothy.

Danny heads back to the precinct, they get a call from the coroner and find out their Jane Doe from the woods was actually a John Doe, wearing a wig.

Frank has his own problems. An anonymous person has posted a video of himself driving through Manhattan within 24 minutes. They also make fun of Frank and say that he can’t set up a decent speed trap. Abigail thinks it is Officer DeLucca, a cop form another town that is in the city for the cop summit. Frank tells Abigail to look into it.

Danny and his partner, Detective Biaz, head to a drag-queen bar called Lipstick Lounge to try to get some information on the body they found in the woods. They ID the John Doe as Tiffany Lamp, and they are questioning her best friend Tellulah Bangkok. According to Tellulah Tiffany Lamp met a guy and got engaged, she said she was moving to Paris.

Erin heads to work, and looks into the Timothy Cooper case. According to Thornton the court-system is just crowded, and that is why Timothy hasn’t made it to trial. Erin isn’t buying it, she wants to look over the case file.

Biaz and Danny pull Tiffany Lamp’s phone records. The last WIFI connection was at a wealthy Ivy League club. All the recent calls were made to a “burner cell” that can’t be tracked.

Tiffany Lamp’s real name is Terry Bell, they visit the Ivy League Club that Terry was last known alive. The concierge says that Terry was visiting a man named Burton Maxwell, an older man who is going through a divorce. They take Maxwell down to the station for questioning.

Erin tracks down a woman named Barbara Keys, she was a witness in Timothy Cooper’s case. Barbara refuses to answer any of Erin’s questions though.

Abigail pulls the toll booth security photos from the speeding video that was posted online, and the car that went through speeding is linked to Delucca. Frank tells Abigail to “run with it.”

Danny is questioning Maxwell, and he claims that he knew Terry was a drag-queen. He was Maxwell’s lover. On January 18th, Maxwell proposed to Terry, and he said “yes.” He gave Terry a $300,000.00 engagement ring, and then Terry disappeared. Maxwell didn’t know he was murdered, he thought that he had played him for a fool and ran off with the diamond ring.

Erin heads back to the office and tells Thornton that his witness Barbara Keys set up Timothy Cooper. Marios Perez, Timothy’s co-defendant, was in a relationship with Barbara. It’s obvious that Marios and Barbara set Timothy up.

Danny and Biaz head back to the Lipstick Lounge to discuss what happened on January 18th, the night that Tiffany/Terry was killed. Danny and Biaz pass out their cards and tell the queens if anyone remembers what happens to call them.

Erin and Thornton pull the jail phone calls between Barbara Keys and Marios, which prove that they were working together to frame Timothy. Thornton admits that he was wrong about Timothy’s case, and Erin tells him he has to “live with it.”

Danny goes under cover, and heads in to the Lipstick Lounge. He introduces himself to Mickey as Maxwell Burton, Tiffany’s ex. Danny tells Mickey that he won’t turn him in for murdering Tiffany, as long as he gives him his ring back. Mickey confesses to murdering Tiffany, and tries to kill Danny, but his back-up arrives, and they arrest him.

Doris Cooper pays Erin a visit at her office. Erin tells her to go home and cook Timothy’s favorite meal because he will be home by dinner. Doris asks her how she can repay her, and Erin tells her to “leave before she changes her mind and throws her in jail for kidnapping.”

Danny visits Tellulah Bangkok and tells her that Mickey O’Donnell is going to jail for a long time for killing her best friend Tiffany Lamp. They share a drink and toasty to Tiffany.

Frank Reagan is speaking in front of all the cops at the annual symposium. He calls Abigail up to speak, and she reveals that they have located the “internet speeder.” Detective Delucca stands up and rushes out of the meeting. Abigail and the other officers laugh as he leaves.