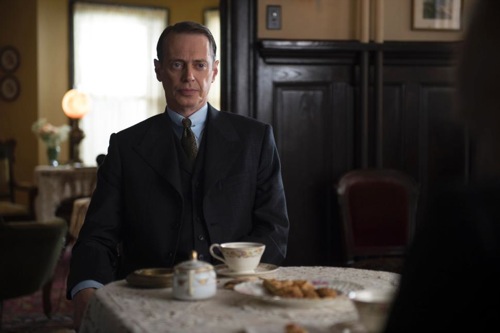 Tonight’s episode of BOARDWALK EMPIRE in its final season was another great episode, I cannot wait to see next week’s episode!  To wet your appetite, we have a sneak peek video and some insight for you below on what is going on next week episode called, “Friendless Child” below.

On tonight’s show In Harlem, Chalky encounters Narcisse (Jeffrey Wright) in hopes of setting Daughter Maitland (Margot Bingham) free. Federal agents enlist Eli and Van Alden to help take down the Capone organization. Pained by a recent loss, Nucky turns to the bottle, and the company of a pair of barflies. In 1897, young Nucky vents his frustration to Mabel (Maya Kazan) after endorsing Jim Neary (Scott Francis Moreau), and roots out a young thief with Eli’s (Ryan Dinning) help. Lots happened on episode 6 and if you want to find out we have a full and detailed recap of tonight’s episode, right here for you!

Spoiler alert: If you’re one of those people who doesn’t like spoilers, stopreading now! We have some juicy spoilers for you about the season 5 episode 7 of HBO’s “Boardwalk Empire”

Official HBO synopsis of next week’s episode: “At war with Luciano, Nucky looks to hold onto his assets in Atlantic City. Willie (Ben Rosenfield) and Eli become involved in Nucky’s war. Maranzano meets his fate. Nucky reads Gillian’s (Gretchen Mol) letter from the hospital. In 1897, Mabel and Nucky argue about a young runaway from Trenton, while Nucky does a discreet favor for the Commodore (John Elllison Conlee).”