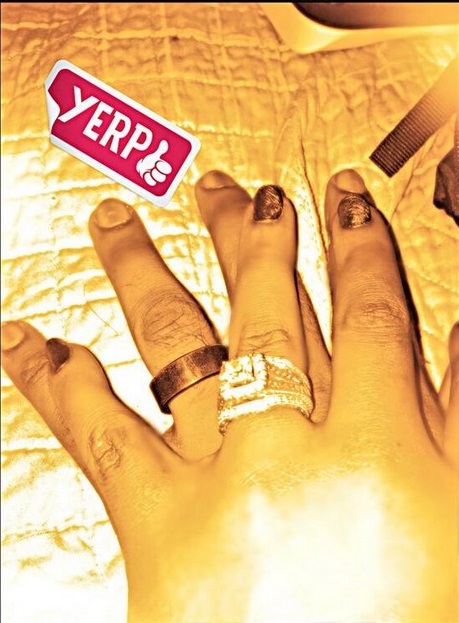 Well, this bit of news is certainly going to gain its share of controversy. Whitney Houston‘s daughter, Bobbi Kristina Brown, has gotten married to her ‘brother’ and longtime boyfriend, Nick Gordon.

When the relationship was first announced, it caused quite a scandal, considering that Nick Gordon was often considered a very close family friend of the Houstons, and Bobbi in the past had referred to him as a brother figure. You know, except for the part where you date your brother figure. Because, ew.

Anyway, Nick denied the allegations, although it became clearer and clearer that the two were dating and just had an on-again/off-again tumultuous relationship. But it certainly seems now that they’ve patched things up. Bobbi tweeted a picture of herself and Nick sporting wedding rings, captioned, “#HappilyMarried So #Inlove if you didn’t get it the first time that is.”

However, there’s not a small chance that this engagement won’t last. The couple previously got engaged in October of 2012, but ended up calling off the engagement due to relationship issues. Then, they got engaged over the summer of 2013, with Bobbi even writing on Facebook, “YES, we me nick are engaged. I’m tired of hearing people say ‘eww your engaged to your brother’ or ‘if Whitney was still alive would we be together or would she approve of this.’”

Then, she joked about marrying Nick in the fall of 2013, although that clearly didn’t happen if they’re once again ‘engaged’. Whatever else is happening, I wouldn’t beg this relationship as perfectly normal and happy. It clearly has its share of breakups and makeups, so this ‘engagement’ might once again be a false start. Also, again, the brother issue. Sure, Bobbi claims that her mother knew that something would happen with her and Nick, but I wonder how Whitney would really feel about this relationship.