Bold and the Beautiful Spoilers – Aly Forrester Is NOT Crazy, So Why Does She Hate Wyatt? 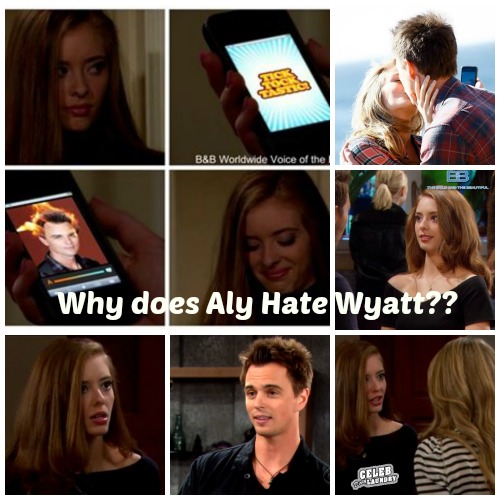 This week on CBS’s popular daytime soap opera The Bold and the Beautiful, viewers seen a new and potentially crazy side of Aly Forrester. While Hope and Wyatt were in Paris, Aly began acting erratically about their relationship. She even took it as far as to try to fire Wyatt from the company, hit him when he made jokes about hooking up with Hope, and then stormed into Hope’s room while she was in bed with Wyatt and began screaming for Wyatt to “get off from her.”

It’s no shock to Bold and the Beautiful fans that Aly is a little on the strange side. When Aly was young her Aunt Taylor ran over her mother Darla and killed her, and then became her step-mother. That’s enough to mess up any child. Also Hope hinted at Aly’s awkward teenage years, and constantly being bullied and teased, which could have also contributed substantially to her mental health. On top of those two things, Aly worshipped Hope and looked up to her, and we all know Hope let her down and fell less than gracefully from the pedestal Aly had placed her on. Between Aly’s tragic childhood, horrible teen years, and feelings of betrayal from Hope, it makes sense to viewers that Aly has finally snapped. But, what is with her hatred for Hope’s boyfriend Wyatt?

Yesterday Bold and the Beautiful executive producer and head writer, Bradley Bell, dished on Aly’s storyline in an interview with TV Guide. According to Bell, Aly is not crazy, “she’s complicated.” Bell also teased that, “Aly was so taken with the message behind the Hope for the Future fashion line — being a good citizen, being environmentally aware and, especially, waiting for marriage to have sex. At first, Hope really believed in all this. Now she’s out there having sex and juggling men. Aly is very unhappy with that. She liked the good, decent Hope and she’s going to try to steer her back to more conservative values. In her mind, Hope has turned into Miley Cyrus!” Bell also stated that, “Over the next few months, we’ll watch this child become a woman — and a real Forrester to be reckoned with!”

So, it makes sense that Aly is a little unstable, considering her background, and although it is a little hard to sell, we see why she is so angry with Hope. But, that still doesn’t explain why she hates Wyatt so much? At one point she was pushing for Wyatt to hook up with Hope because she had a crush on Liam and wanted him all to herself. Could Aly know something about Wyatt that Hope doesn’t know? He has only been on Bold and the Beautiful for about a year, and we don’t know much about his history except he is the son of Quinn and Bill. Maybe Wyatt has a skeleton in his closet and Aly knows what it is?

Why do you think Aly hates Wyatt so much? Leave your theories in the comment section below, and don’t forget to check CDL tomorrow for more Bold and the Beautiful spoilers.