The Bold and the Beautiful Spoilers: Bill Plots To Steal Spencer Publications Back From Katie – Brooke Helps! 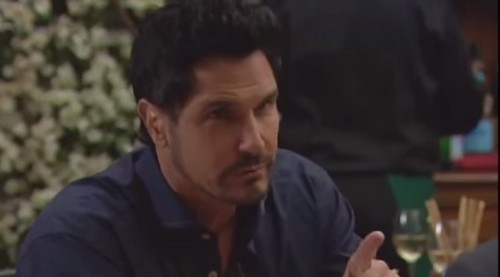 Last week on Forrester Creations we watched the Forrester Family duke it out over control of the family business. Ridge Forrester isn’t the only one on The Bold And The Beautiful who is gunning for control of a company though. This week on B&B Bill Spencer will plot to regain control of Spencer Publications and kick his ex, Katie, to the curb.

We all knew Brooke wasn’t going to take her sister Katie stealing her fiancé Ridge in stride, and it was only a matter of time before she cooked up a revenge scheme. This week Brooke will set out to help her on-again boyfriend Bill Spencer steal back Spencer Publications from Katie, who is the current CEO. By doing this Brooke will kill two birds with one stone, she’ll have a powerful business man on her arm and her sister will have nothing (well-except for Ridge). Bill obviously is thrilled by the idea and the two of them set out to regain control of Spencer Publications.

This week on Bold and the Beautiful Brooke and Bill will begin to implement their scheme. Their first line of attack will be sending Bill’s right-hand man Justin in to the lion’s den, and he will begin to try and win over Katie’s trust. Meanwhile, Bill and Brooke won’t be working alone. The lovebirds will sit down with Bill’s sister Karen Spencer who agrees to help them. The three of them will put their heads together and come up with an elaborate scheme to strip Katie of the CEO position and put Bill back in control.

If Bill and Brooke are successful both Katie and Ridge will be the low men on the totem pole at Forrester Creations and Spencer Publications. But, hey at least they have each other! Do you think Bill deserves to take back Spencer Publications from Katie, or did she steal it fair and square from him? Is Brooke crossing a line by helping Bill, or is it a walk in the park compared to what Katie did to her?

On yesterday’s show, April 15, Bill has a meeting where he expresses his desire to get Spencer Publications back. During the conversation he reveals that he lost his company to Katie through his ex-wife’s conniving and trickery. Not hard to believe about the woman who stole Ridge from her sister Brooke.

Let us know what you think in the comment section below and don’t forget to check CDL for more B&B spoilers.