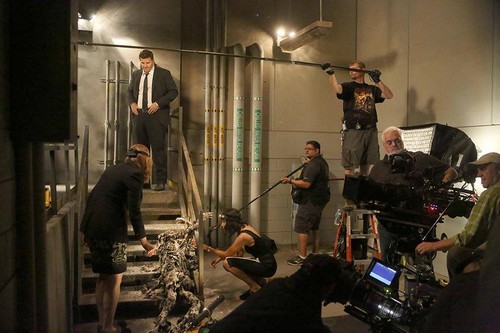 Tonight on FOX Bones returns with an all new Thursday November 6, season 10 episode 6 called, “The Lost Love in the Foreign Land.” On tonight’s new episode a maid is murdered and her remains are found by the side of the road, and the suspect of her murder is her wealthy former employer.  The investigation takes a surprising turn when the team discover the deceased may have entered the U.S. illegally.  Meanwhile, Arastoo prepares his dissertation for Brennan’s [Emily Deschanel] approval, which coincides with talk of marriage between Cam and Arastoo.

On the last episode, the Jeffersonian team attended a forensic science convention with Brennan delivering the keynote speech, only to discover the remains of a body in a stairwell at the convention. With numerous convention attendees offering help and their products, evidence pointed to Dr. Hodgins as a suspect and the team had to find a way to prove his innocence. Meanwhile, Brennan ran into her publishing rival, Tess Brown (guest star Nora Dunn) and “squintern” Wendell Bray (guest start Michael Grant Terry) had news about his cancer diagnosis and returned to work with Jeffersonian team. Did you watch the last episode? If you missed it, we have a full and detailed recap right here for you.

On tonight’s episode as per FOX’s synopsis, “the Jeffersonian team investigates the murder of an immigrant maid whose remains were found on the side of the road. The victim’s wealthy former employer, Sandra Zins (guest star Phyllis Logan), is a key suspect in the case, but when the team discovers that the victim might have been brought into the country illegally, the team realizes the case is much bigger than it seemed. Amidst talks of marriage between Cam and “squintern” Arastoo, tensions rise between Brennan and Cam as Arastoo prepares his dissertation for Brennan’s approval.”

Tune in at 8PM EST on FOX to watch season 10 episode 6 of BONES. We’ll also be updating fans right here as the show airs so be sure to check back in with us. Brennan and Booth have had a long television run. Do you like that their characters mix up business with home life? Hit up the comments and tell us your thoughts about their tangled relationship!

A woman was murdered and her killer had chosen to use goats of all things to help dispose of her body. Apparently they’ll eat anything so their culprit just threw the victim’s body into their backyard hoping that would be the last anyone had seen of her. However goats aren’t exactly carnivores in the traditional sense. Meaning there was still plenty left of the body to bring back to the Jeffersonian.

And from what the bones say, their victim was a bundle of contradictions. She was young yet desperately malnourished. She couldn’t have been any older than 25 and somehow she was suffering from early osteoporosis. Otherwise known as a disease often seen in the elderly.

Though eventually the team did learn her name and even her occupation. The victim’s name was Teresa and she came to this country on a work visa. She worked as a maid for various homes. But she allegedly ran into some trouble with one of her clients.

Teresa had complained to her boss that someone had inappropriately come on to her. And while Booth and Aubrey are going to follow up on that lead – they also have to take anything Teresa reported with a grain of salt. Before she died, she had come pretty close to getting fired from her housekeeping company. It seems several clients of hers had reported missing items.

Meanwhile back in the lab, Cam inadvertently had caused tension that pretty much everyone was feeling. And their argument was even about their case. Cam had tried to argue with Bones about Arastoo. Her boyfriend had written up his dissertation and had asked Bones to look it over for him. But Bones hadn’t liked the work he handed it so she told him to try again.

And, well, Cam hadn’t liked that. Hence she went behind Arastoo’s back to get Bones to reconsider his original proposal. Bones then had to tell her that Arastoo could fight his own battles and in case she missed it the first time – Arastoo later found her to tell her to back off.

He appreciates that she cares for him but if she can’t even consider one day marrying him then maybe she shouldn’t become too involved in his life! Earlier they were discussing his parents or more importantly the recipe his mother had sent Cam when he told her his folks were pressuring him to propose to Cam.

So they aren’t on the same page and their relationship might not outlive the case they’re working on.

And, truthfully, their focus should be on the case because turned into a bit of a doozy when no one was looking. The “housekeeping” company turned out to be a front for human trafficking. Her kind boss, Victor, had actually locked up women he had gotten into the country on fake visas in basements where he would sometimes beat them into submission.

Victor thought his reign of terror and his many connections back in his home country would have ensured his victims’ silence.  Though, once his victims went into care and were told their families would be protected from any reprisals – they weren’t so scared anymore.

Yet there was still the mystery of who killed their victim. Their victim had come to the States in order to reunite with her fiancée who had also been trafficked. She loved someone by the name of Sung Dae Park and so she would sneak out of the house, where her and the other women were kept, to go look for him.

When Victor found out about what she was doing, he threatened to punish everyone including the women’s families the next time she snuck out. So while Victor is to blame – he’s not the killer. It was a woman named Tammy Hyun that killed Teresa. She didn’t want Victor hurting the daughter she had left behind.

Hence she rid herself of the problem.

There was no winning with this type of case. Tammy doesn’t deserve to be tried for murder, but she will be and there’s nothing anyone can do about it. So, all the team could do afterwards was appreciate what they have.