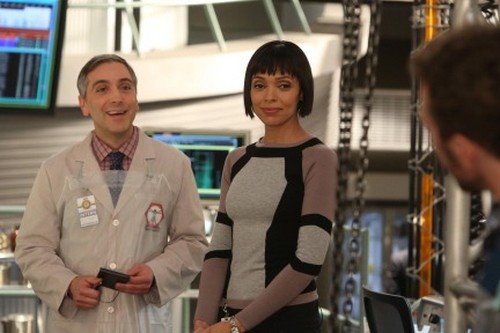 BONES returns tonight with an all new episode called “The Master in the Slop.” On tonight’s episode much to Brennan’s annoyance, Dr. Douglas Filmore (guest star Scott Lowell), the always sunny Canadian forensic podiatrist fills in as a lab intern.  Did you watch the last episode? We did, and in case you missed it feel free to check out our full recap RIGHT HERE.

On the last episode the Jeffersonian team investigated the death of Colin Haynes (guest star Charlie Worsham), a struggling country music singer whose remains were found in a shallow grave. When the team learned about the victim’s music career, it led them to his record label, which, they discovered, was deceitful in its dealings with him. Meanwhile, squintern Wendall Bray (guest star Michael Grant Terry) broke his arm during a hockey game and Brennan took a closer look at his injuries, only to discover some shocking news.

On tonight’s show when the Jeffersonian team discovers the body of a renowned but disliked chess master amidst pig slop, Sweets surprises the team with his chess skills and goes undercover in the world of professional chess to find the killer. Cam is being recognized in the “Outstanding Woman of Science” issue of a noted science publication but is hesitant to participate since she does not want to offend Brennan who knows she should be the one to be honored. Meanwhile, much to Brennan’s annoyance, Dr. Douglas Filmore (guest star Scott Lowell), the always sunny Canadian forensic podiatrist fills in as a lab intern.

A human body was found on a pig farm in Virginia. The remains were in the trough and pigs have been known to eat human bone. The interns this week are all out but Bones has her favorite Canadian, Dr. Filmore to help. He arrived to do a paper on the international cooperation between Canada and the United States. A paper that would have went unfinished by simple fact that Bones didn’t want him interfering with her case. She still doesn’t believe in anthropological podiatry but it seems Filmore went back and got his PHD in the same forensics as Bones. Now she has to treat him as her peer.

Cam on the other hand is worried how Bones will treat her once she learns her secret. Cam mentioned to Angela that she won the award for Outstanding Woman of Science. And generally these awards would go to Bones. Cam is worried about Bones reaction and Angels tells her not. Angela goes to share the news of the award with Bones.  She wanted to warn Bones to be nice and at least be proud of their friend.

They couldn’t find the name of the dead guy. All they know so far is that he was murdered. Someone had dismembered him before trying to feed him to the pigs. Although they did manage to get a trace of DNA. The DNA belonged to the infamous Jerich Henry. Jerich once went on trial for killing people and feeding them to pigs. The only reason he’s out is because the cops never did recover any of the bodies.

Booth brings Jerich in for questioning. However Jerich has some outlandish claim. He swears someone dumped the man’s body over his fence. He didn’t want to call the cops because of his past history. Jerich was afraid the crime would be pinned on him so he tried to dispose of it using the pigs. He doesn’t even know who the man was and neither does the feds.

Its Sweets that was able to identify their victim. The victim was Albert Magnuson. He was a champion chess player. He was also worth a lot of money. Its’ only natural that they suspect whoever was next to profit from it but it’s not the fiancée. She genuinely loved Albert. He was even living with her and her son, Tim. Tim adored his soon to be step-father. He was the one that introduced Albert to his mom.

Albert was Tim’s tutor at chess club. He helped mentor him although many other people at the club didn’t hold in Tim in such high esteem. Once all other suspects had been cleared; Sweets started to supect another chess master killed Albert. Delivering his body to Jerich was well thought out move. Anyways Sweets has some old roots at the club, it will be easier for him to return undercover.

When he does, he runs into some old friends and new enemies. Apparently Sweets used to be a chess master himself. His new status will help him suss out who had motive. Tim’s former mentor didn’t like Albert and he doesn’t like Sweets sniffing around either. Still he’s not a suspect. He was with Tim when Albert died. Speaking of which Sweets and Booth found the murder scene. It was in the club parking garage. Someone had destroyed the cameras down there and killed Albert early in the morning.

Angela was able to get the time the cameras got shut off. And it happens to time up with Jerich timeline perfectly.

Cam is still worried about her award. This time for different reasons. She told Angela she called them up and told them she will only accept an award if Angela and Bones can be honored as well. Angela is just grateful. She’s proud that Cam truly believes her part of the team. But Cam is waiting to tell Bones the news until she hears back from the sponsors. She probably shouldn’t wait too long though. Bones is being petty about losing out to Cam. Booth had to tell her to stop being that competitive.

Fillmore and Bones figured out how Albert died. They did so by studying his feet (Fillmore personally loved that part). Albert was electrocuted. Someone had laid out the floor with water and salt rocks. The moment Albert stepped on it he was thrashed around before he violently died. The Jeffersonian team was only beginning to suspect Albert of his murder when Sweets believes he caught the guy.

Sweets arrested Tim.  They were playing chess when Sweets realized there was something up with Tim. For one he could have won the game much earlier but he didn’t want to sacrifice his queen. The next thing he picked up on was that Tim didn’t yawn when Sweets did. There’s one type of people that don’t yawn after others begin to… sociopaths.

Angela went over the garage again. She quickly picked up on the fact they had the wrong time of death. Albert died back when Tim didn’t have an alibi.

Sweets brought Tim in. After a grueling session questioning he realized why Tim did it. Tim felt like he was losing his mother to another egotistical guy. That’s his weakness. Tim doesn’t ever want to lose his mom. The team plays it up in order to get him to crack. They arrest his mother for Albert’s murder. Left with losing his mom or admitting to murder – Tim confessed.

He never liked Albert. He was actually much smarter than his supposed mentor but he hid that to get people to underestimate him.

The magazine chose to honor all three women for their outstanding accomplishment in science but there is a hitch. 9 other women are getting honored as well. The magazine has lost a lot of money and are trying to regain interest by having the women do a calendar…in bikinis! And after hearing whose agreed already, the ladies feels like they shouldn’t let anyone down. The women of the Jeffersonian team are going to be in a calendar.