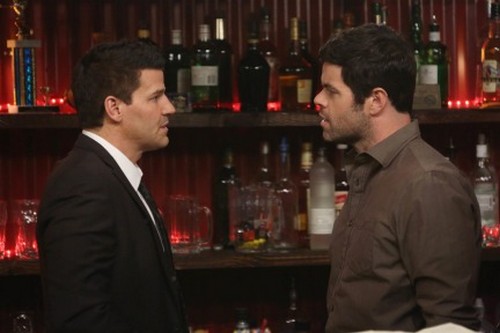 BONES returns tonight with an all new episode called “Big in the Philippines.” On tonight’s episode Wendall Bray (guest star Michael Grant Terry) breaks his arm during a hockey game.  Did you watch the last episode? We did, and in case you missed it feel free to check out our full recap RIGHT HERE.

On the last episode the Jeffersonian team investigated the death of Lana Brewster, a girl whose remains were delivered to Brennan and Booth’s home by someone who believes her death 18 years ago was no accident. When the team discovered that Lana was murdered and her death was covered up, people from her past become key suspects, including an ex-boyfriend with whom Hodgins was friends. Meanwhile, Brennan started having dreams again about evil tech genius Pelant, and about a potentially more heinous killer, whom she realized could be involved with Lana’s death.

On tonight’s show the Jeffersonian team investigates the death of Colin Haynes (guest star Charlie Worsham), a struggling country music singer whose remains were found in a shallow grave. When the team learns about the victim’s music career, it leads them to his record label, which, they discover, was deceitful in its dealings with him. Meanwhile, squintern Wendall Bray (guest star Michael Grant Terry) breaks his arm during a hockey game and Brennan takes a closer look at his injuries, only to discover some shocking news.

The First lady specifically asked for the FBI to be on a murder case. She’s all about sponsoring “go green” by growing your own garden and someone has decided to desecrate one of these beautiful gardens. They had buried a man in a shallow grave where apparently he was found by coyotes. The beasts found him and then because of what he was covered in; they ended up vomiting him back up into pieces of all over the crime scene. The Jeffersonian team didn’t know he was a man until Cam found his genitals among the vomit.

Their victim’s name was Collin Haines and he was musician. He didn’t make a lot of money and actually had to take on other jobs to supplement his income. Despite all he did to try and get by, Collin still didn’t have enough to see a doctor. Bones noticed that he was suffering from an infection. It must have hurt and for him to allow it to go untreated meant he had no other choice.

This week’s intern is Wendell. Not that he’ll be of much use. He broke his arm playing hockey. He still wants to do his job, but Bones is suspicious on how exactly he broke his arm. She had seen footage of the game and from what she saw; his arm should have been fine.  So she begins digging into Wendell’s care at the hospital. Wendell said his doctor didn’t have anything else to add seeing as to the hospital it was a clean break. Bones refused to accept that and investigated his x-rays herself. What she found was a rare condition. She showed it to Cam so that they both may find a way to tell Wendell he has bone cancer.

Collin was signed onto a recording contract. However Sweets and Booth found a torn up check from his manager at his home. For someone desperate for money why would he have torn up a check?  His manager’s shady past might have something to do with it. This woman has gained a reputation for ripping off her clients. Not that she’ll ever admit if there was any truth to the stories. But what she did do was give the feds some of Collin’s music he had already recorded.

Sweets are trying to build up a profile on Collin. A lot of his music appears to be him addressing something in his past. He and Booth returned to his apartment to find more clues when, what do you know, they accidentally ran into one of his super fans. For such an unknown artist, Collin was extremely popular in the Philippines. The super fan that wanted one last piece of Colin said the man’s music was everywhere back home.

As for the fan he found out about Collin’s apartment when someone has put a geo-locator on a video she had taken of her favorite singer. A day before he died Colin was approached by a fan. He was obviously surprised to learn he had fans and asked where she heard his music. She told him that was all the Philippines were playing on the radio. This young woman was also the one that took the video and gave away his location. Whether this is how his killer found him remains a mystery.

What it does clear up is that Collin was being ripped off. His manager gave him a check for a thousand dollars meanwhile she was raking in the money overseas.

Bones chose to have Booth by her side when she told Wendell the truth. They met him with at their diner and in all honestly tried to break the news gently. It was just hard to do with Bones already getting teary. They broke the news as well they could. They told him they found an amazing doctor who specializes in the field. Because of the type of cancer he has they had to tell him to get immediate attention.

Wendell tries to take the news calmly. He went and saw the doctor. And yet the news isn’t all that great. They would have to seek aggressive treatment and even then it might not work. After hearing that a part of him wonders what if he didn’t fight the cancer. He spoke to Booth about traveling. He said he always wanted to see the world. Booth wants to talk him out of it when they Sweets unintentional interrupt them. No one except Cam, Bones, and Booth knows about Wendell. That’s why he couldn’t explain to Sweets now wasn’t a good time.

Sweets did learn something digging in Collin’s life. Collin was in love with his landlord. The very same woman at the beginning of the investigation that pretended to have no interest in his death. They had a big blow up the day he died. He wanted to take her to the Philippines where they could have had a good life. She didn’t really believe him when he made those promises and he couldn’t provide proof. His two tickets to out of the country got lost.

Although the tickets weren’t. They were stolen. Cara, Collin’s girlfriend, had an ex-boyfriend. He had a temper and he worked with Collin at the bar. He stole the airplane tickets and when he realized what they were for; he killed Collin. No one was allowed to take Cara away from him.

Wendell is going to seek treatment. He was close to just giving up when he realized that’s not how he wants to be remembered. Even if he dies, he wants them to remember he went down fighting.