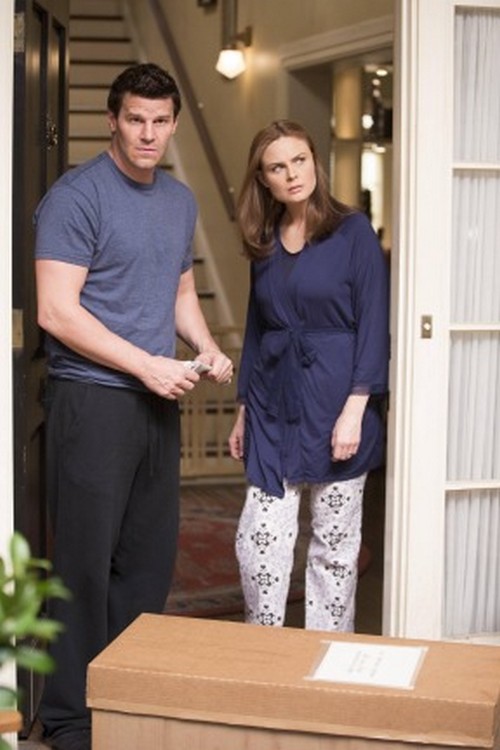 BONES returns tonight with an all new episode called “The Ghost in the Killer.” On tonight’s episode Brennan starts having dreams again about evil tech genius Pelant, and about a potentially more heinous killer.  Did you watch the last episode? We did, and in case you missed it feel free to check out our full recap RIGHT HERE.

On the last episode the Jeffersonian team investigated the murder of a nationally ranked gymnast, whose remains were hit by lightning and scattered throughout a public park. Although evidence pointed to a fellow gymnast (guest star Maroney) as the key suspect, Brennan and Booth discovered the victim was leading a double life. Meanwhile, Booth got upset when Brennan showed surprising empathy for the victim’s father (guest star Schiff), and Cam confronted the woman who stole her identity.

On tonight’s show the Jeffersonian team investigates the death of Lana Brewster, a girl whose remains are delivered to Brennan and Booth’s home by someone who believes her death 18 years ago was no accident. When the team discovers that Lana was murdered and her death was covered up, people from her past become key suspects, including an ex-boyfriend with whom Hodgins was friends. Meanwhile, Brennan starts having dreams again about evil tech genius Pelant, and about a potentially more heinous killer, whom she realizes could be involved with Lana’s death.

Bones has been having nightmares about Pelant. He had led her to a new serial killer and without him she fears she’ll never be able to catch this woman. Booth tries to tell her its only a dream but she’s been having the same dream a lot lately. Bones wanted to work the case and try to identify this ghost killer. Yet she didn’t have Cam’s full approval and Booth better understood Cam’s position. Neither of them can launch a full scale investigation into of Pelant’s theories. Especially not on the crazed killer’s words alone. They need evidence first and Bones couldn’t come up with any.

Bones received a package at her house. Inside was the remains of a woman and she was mostly skeletal. There was a message with a body though. Strangely is said “please find out what really happened to me”. Either the killer likes to play games or someone dropped off the body asking for Bones’s help. This week Bones doesn’t have an intern. Cam had instead offered her Dr. Edison. Bones wasn’t pleased with that, but she took what she could get.

Booth on the other hand is worried about Bones. He told Sweets he was scared someone was trying to target Bones again. He doesn’t want another Pelant situation on their hands.

Their victim’s name was Lana Brewster and she died back in 1995. Someone dug her up out of her grave just to deliver her remains to Bones. Lana was a bit of a celebrity. She was a teenage sailor that had gained notoriety for sailing to far off places by herself. Her only living relative, her brother, didn’t particularly like her though. So he couldn’t have been the one to dug her. That had to be someone that cared about Lana. It was the parents’ fault that the siblings weren’t close. They had made no secret of preferring the celebrity of their “normal” child. All he could tell Sweets was that there was a boy and his parents were worried it would distract Lana.

Whoever disturbed her rest must have had a reason and the team might know why. Lana was murdered. The official cause of death on her certificate was drowning after a boat accident. Which is odd because Edison and Bones found severe bone damage that was never mentioned in the report. Unless the medical examiner was extremely negligent; she must have covered up the crime for someone. Angela was able to track large cash transfers into the former medical examiner’s accounts. They would have questioned her, but the woman unfortunately died eight years ago.

Sweets thinks the killer could have been a fellow competitor. Her name was Sarah and Lana had reported her cheating during a competition. Sarah ended up getting kicked out of any future races and even served some jail time. She tried to sink her boat for the insurance money and got caught. Sarah is still bitter a miss about Lana. Although she swears she didn’t kill Lana.

All the teams know so far was that the boat was sunk deliberately. Hodge was able to help them out there. He was a yacht kid and has experience around a boat. Another person who shares that experience was some of Hodge’s old country club friends. Angela tracked the money transfers back to the Macnamaras. They were old school money that Hodge used to know. He remembered the family had a teenage son, Trent, and the kid was always getting into trouble. Luckily the father was always bailed Trent out.

Trent was sent away to school in Switzerland two days after Lana’s body was found. Sweets and Hodge have to go together to question the family. Hodge got them through the front door but once murder accusations started to fly their invitation was rescinded. Hodge showed up late by himself to talk to Trent. He doesn’t believe Trent killed Lana and he wanted the other man to know that.

Later, Trent unexpectedly killed himself. Hodge didn’t see that coming and is shocked Trent didn’t even leave a note. Trent’s sister, Stef, can’t believe he shot himself. Her family wasn’t nice. The men in it always manipulated things so they get off scot-free. Ina way she was glad Trent was the last male in the family.

Edison and Bones found out that Trent barely had any motive skills in the hand that was dusted with gun residue. Trent injury goes back a couple of years and it’s doubtable he was able to kill Lana much less himself. Yet there is a slim chance Trent still could have done the crime and without further evidence that’s the option the team has to go with.

Edison and Bones were struggling with the ghost murderer. At one points Bones thought their mysterious serial killer was the one to kill both Trent and Lana. Cam sent Edison to overlook the case and see if there was actually a case. She did this because Booth had asked her to give Bones some time. He knows it can’t last but he needs Bones to follow whatever she needs to. It’s the only way she’ll be able to put Pelant behind her. And after a while, plus some conversation with Edison, Bones was able to back off. She still thinks there is a ghost killer out there, but she will stop obsessing in the meantime. She’s going to let Cam decide where the case goes next.

As for Booth, he’s going to trust Bones. If she says there is a killer then there must be a killer.