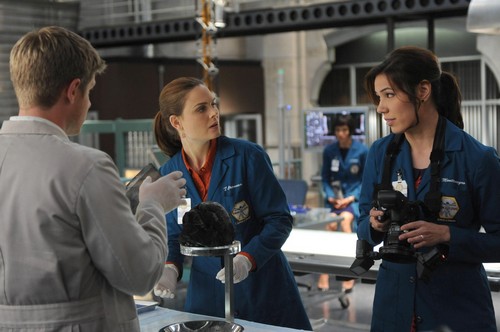 Tonight on FOX BONES returns with a whole new episode called, “El Carnicero en el Coche.” On tonight’s show the Jeffersonian Team investigates the murder of a gang member.  Did you watch last week’s episode?  We did and we recapped it for you HERE!

On last week’s show the Jeffersonian team investigated the murder of Adam Pak, a management consultant whose remains were found being eaten by bobcats. When evidence led the team to a marriage retreat site, Brennan and Booth went undercover as previous personas “Roxie” and “Tony” to try to find more evidence. While at the retreat, Brennan and Booth met fellow married couple Bill  and Evelyn Schumacher, whose relationship seemed a little too perfect. Meanwhile, Cam got mistakenly arrested when her identity was stolen and Sweets decided to take a leave from the FBI.

On tonight’s episode the Jeffersonian team investigates the murder of Jamie Delcampo, a member of the Estrellas Locas gang, whose remains were found in a burnt out car. Meanwhile, having taken time off from the FBI in the wake of Pelant’s latest assault on the team, Sweets ultimately decides to help with the investigation when he discovers that a young boy from the center where he volunteers is the son of one of the gang members.

Tonight’s Bones season 9 episode 2 is going to be exciting, and you won’t want to miss. So be sure to tune in for our live coverage of Bones — tonight at 9PM EST! While you wait for our recap, check out the sneak peek of tonight’s episode below!

A body was found in the remains of a burned car by two tow truck drivers late last night. Funnily enough they were at first fighting over who got to claim the car but once a dead body entered the picture then no one wanted it.

Later Bones, Jack, and Camille were the first to arrive on the scene. Bones was late because he was too busy guilt tripping Sweets. He figured the best way to get his old partner back would be to pretend he’s happy for him and then occasionally call when he desperately needs Sweets’s assistance and no one else could help him. He appeared to have forgotten that Sweets is a psychologist and does know what Booth is doing.

Back at the scene taking evidence turns out to be harder than anyone thought. While removing items the car rapidly begins to fall apart. Thankfully they were able to obtain an axe that could be the possible murder weapon. The victim was not only found with that axe but there were also several bullet holes in the car. Whoever wanted him dead used any possible means. Perfectly understandable when the victim turns out to be a notorious gangbanger. Angela found his rap sheet and there’s plenty of people that could have wanted him dead.

What do you know, Booth needs help. It sure didn’t take him long to go to Sweets who to does look shocked. He did just see Booth a couple of hours ago. Their “victim” was a butcher so to speak. He chopped his enemies up and scattered them around the city.

Booth and Sweets try to enter his neighborhood to speak to his live-in girlfriend but she’s part of the gang too. She won’t talk to cops no matter how considerate Sweets makes himself. He offered to set her up with the community center he’s working at now but the more they talk the closer her “neighbors” come to her to observe. She has a kid inside so she decides not to risk it.

Booth and Sweets move on to their number one suspect only to walk in on retaliation. Their victim’s crew nearly killed when they were interviewing “Mr. Martin”. Their suspect manages to survive but another person has decided from the other gang. Next time it may not be a simple drive by.

Booth is acting as if get shot at was just in day’s work. This only makes Bones furious. For instance why didn’t he call her right after. She had to hear about it from others. For Bones to point it out makes him promise albeit reluctantly to always unless he’s dead.

Delcampo, the victim, wasn’t shot execution style. The doctors realize when they were two entry wounds then it must have been from one gunshot. It was a face to face confrontation and the shooter was shorter. It could be one of his fellow members but then they would have killed him differently. Just as the team begins to theorize Booth gets a call. Another victim was killed with the same gun.

The second victim was killed around the same time as Delcampo. She was chopped up leading them o guess Delcampo may have killed her. The victim had her brain removed. Her name was Adriana and she was the police’s informant. She was also sleeping with Delcampo.

Someone killed him after he killed his lover. Could it be Maria, the live-in girlfriend? However she’s used to being called in and knows how to stall. It’s what happening outside of the interrogation room that’s interesting. Her son and Sweets start up a conversation. This smart and bright kid who no doubt didn’t like the man that beat his mother.

Sweets brings the kid into his mother’s interrogation. He feels the boy will break if he faces his mom getting punished for what he did. After a while the kid breaks. He did kill Delcampo for his mother but she’s not grateful. She tells him she never wants to see him again. In the end, some people are too ingrained in the life. All she sees is that her son messed with her chances.

The kid will be safe thought. He is a minor and all he has to do now is point them to where the gun library is. Once they trace the call Booth picks up the members fleeing the scene.

Everyone is congratulating Sweets on what he did today but he ruins the moments by reminding them he still has leave. Today served to remind him that’s he’s doing good things with community center. Helping kids move away from gun violence.