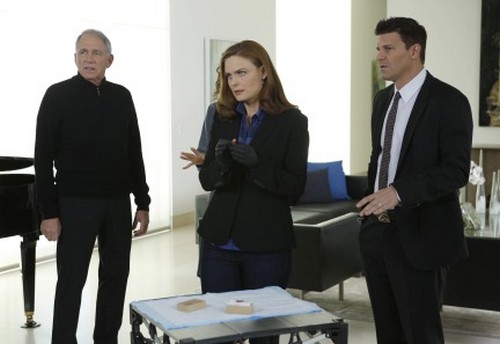 BONES returns tonight with an all new episode called “The Heiress in the Hill.” On tonight’s episode Hodgins uncovers a shocking secret about his family and Brennan and Booth face a common couples dilemma – whether to co-mingle their funds.  Did you watch the last episode? We did, and in case you missed it feel free to check out our full recap RIGHT HERE.

On the last episode when the Jeffersonian team discovered the body of a renowned but disliked chess master amidst pig slop, Sweets surprised the team with his chess skills and went undercover in the world of professional chess to find the killer. Cam was being recognized in the “Outstanding Woman of Science” issue of a noted science publication but was hesitant to participate since she did not want to offend Brennan who knew she should be the one to be honored. Meanwhile, much to Brennan’s annoyance, Dr. Douglas Filmore (guest star Scott Lowell), the always sunny Canadian forensic podiatrist filled in as a lab intern.

On tonight’s episode the Jeffersonian team investigates the murder of Lauren Frank, a kidnap victim whose remains were found buried at a park. But when they discover the unhappy relationship that Lauren had with her stepmother, the team starts to think the killer was someone closer to the girl than expected. Meanwhile, Hodgins uncovers a shocking secret about his family and Brennan and Booth face a common couples dilemma – whether to co-mingle their funds.

Hodgins and Angela were just joking around about their new finances when they were approached by a doctor of a psychiatric facility. It seems that Hodgins family had created a trust that would normally donate to the hospital but as there is no more money; Hodgins was forced to tell Dr. Rosseun that he couldn’t donate. That wasn’t what doctor wanted to talk to him about though. The doctor needed to inform the family that Hodgins brother hasn’t had his bills made. Hodgins of course thought the good doctor was wrong seeing as he doesn’t have a brother. As far as he knows; he’s an only child.

Elsewhere, Booth found a check made out to Bones. It was for 75 grand which is a lot of money in Booth’s opinion is. It’s actually more than he makes in a whole year and it’s just an advance from her newest book. Bones was busy with a new case so she asked him to deposit it for her. He couldn’t do that right away because they don’t share a bank account. She had to transfer it to him first.

There’s something about that check though. Booth doesn’t like it and he’s been in attitude ever since. Sweets picked up on it and tried to help but Booth doesn’t want to be psycho analyzed.

Bones’s new case involved finding the body of a young woman deeply buried. Someone had covered her in Lye and had gone as far to smash her teeth. They were hoping no one will be able to figure the woman’s identity. However they didn’t count on the Jeffersonian team. This week’s intern is Fisher. Him, Bones, Cam, and Hodgins all working together helped identify their corpse. Her name was Lauren Frank.

She was 26 and still living at home but no one had reported her missing. Booth and Sweets called in her parents and quickly noticed the older couple’s odd behavior. The Franks thought the FBI found their daughter and the guys were wondering why they ever thought Lauren was missing. As it turns out, Lauren was kidnapped. And the Franks were still with Sweets and Booth when the kidnapper called them to make a money drop.

Whoever the kidnapper is; they’ve already made mistakes. They killed Lauren too soon. Then they continued trying to extort rather than simply abandoning their plan. These aren’t professionals and everyone is hoping that they’ll keeping making slip ups like these. If they do then might get caught sooner.

Lauren was taken from her home possibly in the middle of the night. Usually the alarm would have kicked in but Lauren supposedly had her window open. Her stepmother said it was her idea. She though Lauren’s skin would be better with fresh air. Although no one knows why Lauren even took the suggestion. All evidence points to the two women hating each other. Lauren had even told a causal friend of hers that she once caught her step mom messing around with a trainer.

Hodgins found out that there wasn’t a mistake with the institute. He does have a brother who also happens to be very ill. His parents had his brother institutionalized when they learned they were pregnant with Hodgins. The older brother would fly into violent rages and their parents couldn’t control him. So they made the decision to protect their youngest son.

Hodgins went to go see his older brother, Jeffery. Things were ok between them in the beginning until Hodgins said one thing wrong. He became clear to him that he couldn’t control Jeffery when the older man lost it. One of the orderlies had to calm Jeffrey down.

That broke Hodgins’ heart. For an instant there he thought maybe he could bring his brother home and take care of him there. Afterwards he knew he couldn’t. Angela wants to makes things better for him ad she can’t. All Hodgins can do for his brother is love. Especially now that Jeffery is going to have to leave the only home he knows and enter a state facility.

The stepmom, Catherine, is being primed as the number one suspect. Her pre-nup ensures that she gets nothing if she ever cheated on her husband. Also there was a kidnapping policy that was in her name. Angela though was the one to find the final nail for the proverbial coffin. She traced the ransom demands back to Lauren’s phone. Lauren was stolen several days ago so why was her phone transmitting from her house.

Booth found the phone in Catherin’s workout gear. But the other woman is still demanding she’s innocent. According to her, she wasn’t even the one to think of a kidnapping policy. That was her husband’s idea. The team was close to suspecting the father next when Lauren’s autopsy revealed something.

Lauren’s toe was cut off and sent to her parents but whoever killed her also loved her. She had gotten an infection from her toe removal and someone gave her penicillin to lower her fever. They didn’t know that Lauren was allergic.

Her death was an accident but not her kidnapping. Angela decoded the rest of the text messages that were evidently set up in a queue. Lauren had set up her own kidnapping. She wanted to run away with her boyfriend and needed cash. She convinced her new friend, the dog walker, to help her. Yet he didn’t know that she had planned to set him up for the fall. Lauren was going to take the money to start over and let everyone back home think she was dead. She was just that callous.

The dog walker loved her. It was the only reason he wanted to help and now he’s going to go to prison for her death anyways. Exactly like she planned.

Bones had told Booth he could do whatever he wanted with the money. He had originally thought to give it Hodgins for his brother but Hodgins feels like Jeffrey should be his responsibility. He’s going to take a loan and find a way to keep his brother there. Sadly, Jeffery had heard he was going to be moved and he ran away. Hodgins volunteered himself to go look for him.

When he found Jeffery, his brother had thought he was an evil spy sent to destroy him. Still Hodgins found a way to get to him. He admitted the truth. He told Jeffery they were brothers and that he was going to look out for him. And after a while, Jeffery was willing to bond and go with Hodgins.