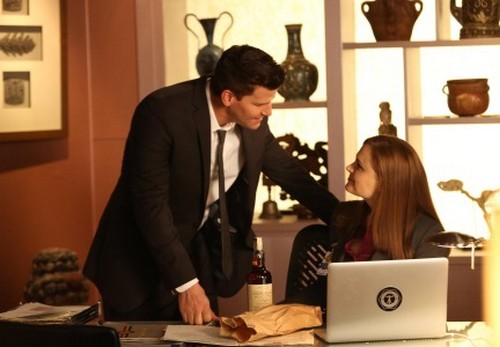 BONES returns tonight after a 6-week hiatus with an all new episode called “The Source in the Sludge.” On tonight’s episode the murder of a CIA informant sends Booth and CIA agent Danny Beck on the trail of an Afghan terrorist.  Did you watch the last episode? We did, and in case you missed it feel free to check out our full recap RIGHT HERE.

On the last episode the Jeffersonian team investigated the murder of Lauren Frank, a kidnap victim whose remains were found buried at a park. But when they discovered the unhappy relationship that Lauren had with her stepmother, the team started to think the killer was someone closer to the girl than expected. Meanwhile, Hodgins uncovered a shocking secret about his family and Brennan and Booth faced a common couples dilemma – whether to co-mingle their funds.

On tonight’s episode when a CIA informant is found murdered, Booth and CIA Agent Danny Beck (guest star Freddie Prinze Jr.) must work together to track down an Afghani terrorist. Meanwhile, Brennan wants to work more closely with Booth in the field, and the duo must confront the implications of what that means to their family.

A decomposed body couldn’t have arrived at a better time. Booth and Bones were in the middle of an awkward lunch because Bones was agitated over an insurance company policy. It seems her policy is higher than Booth which she believes is completely unfair. Bones knows based on the evidence that she’ll outlive him. And just because he has more field experience than her doesn’t mean he’s better at it. Unless the insurance people and Booth want to forget that she saved his life once. Bones also accidentally shot but she doesn’t want to dwell on that like Booth does.

The body they were called in for appears to be foul play. A badly decomposed body was stuffed into a bag and dropped off at a swamp.  The victim was in her late 20s and her ethnicity can exactly be pinned down but the closet they (Bones and Daisy) were able to get was Middle Eastern.  The rest of the body was too messed up due to someone threw in eels in with the body.

The eels eat most of the flesh. However the victims had surgery recently and they were able to track down a bone implant. Her name was Sari Nazari. She was an Afghani woman that came to the States seeking asylum after helping Americans in her home country. But there’s more to her story than merely being a teacher’s aide.

When Bones and Booth went to inform Sari’s brother about her death they managed to run into CIA agent Danny Beck. Danny and Aziz were getting concerned about Sari – she was a CIA asset. Back in Afghanistan, she helped the US government kill a notorious terrorist called Ibrahim.  Although Aziz doesn’t think Ibrahim is actually dead.

If anyone had a grudge against Sari enough to kill her then it would be Ibrahim. The government used a drone attack and though it was a big explosion (Sari had gotten hurt just by being close to it) many are skeptic about whether or not a terrorist is in fact dead. Aziz thinks he’s alive and one of the military personnel that were there the day during the attack also has his doubts. Even Sweets thinks a personal vendetta could be behind the way Sari was killed.

Corporal Johansson is now a security guard but he’s sticking to the same story. The former G-man is haunted by that drone strike and still he thinks Ibrahim is alive. After all the man was known as the chameleon because he could blend in anywhere.

Daisy has been slipping up at the office. Bones noticed and had asked her about it and what she got in return was a lie.  Daisy told her that she was worried about her Orals exams when she already took those tests. She took them and failed. Daisy doesn’t like failing but she knows how much Bones would hate it.

Bones is perfectionist and that’s why she’s so mad about her higher premium. She doesn’t feel like she’s in any more danger than Booth is. To prove that point she goes with him when he and Danny question Aziz.  Aziz had made a phone call to Afghanistan when he was under express orders to never contact his home again. But none of that mattered to him. He wanted to go home where he was respected and he was going to take his sister with him.

Sari had been acting strangely prior to her death. She was going out at all hours of the night and Aziz thought it would best to take her back home. But both Bones and Booth want to know why Danny is claiming he never knew about Sari’s late nights.

Booth knew he was lying. Though he would never have imagined Danny was behind Sari’s late night. Danny broke protocol and started seeing his asset. He was so much in love with her that he gave her his weapon he received from Special Forces. It was supposed to protect and yet it was the weapon used on her. Sari was bound and slashed but she died from dehydration. Someone left her to die and that’s too cold to have ever been done by Danny.

So back to her normal competent self, Daisy was able to pick up some evidence that could lead to their killer. Sari bit her attacker and from the skin cells they managed to collect they learned her killer was of Nordic descent. That doesn’t fit Ibrahim or Danny but it fits the corporal they had spoken to earlier.

Johansson was so convinced that Ibrahim is alive because he was the one faking the evidence. Ibrahim died in that drone strike but his network was still running and Johansson was helping the terrorists in their operations. He killed Sari for her part in Ibrahim’s death. Then he got a little too close with getting away with it.

The government wanted to make a deal with him. He would get off scots free if he gave them everything they wanted to know about the terrorist cell in Afghanistan. Johansson gave up the information freely but he didn’t know that Booth and Danny had a plan B in place. Technically the former corporal is till registered in the army seeing as he’s collecting disability checks. That means he can be court-martialled.

The guys handed him over knowing that the military courts were separate from the deals he made. This also means that he can face the death penalty for Sari’s murder. Maybe he should have sold his country so easily for thousands of dollars.