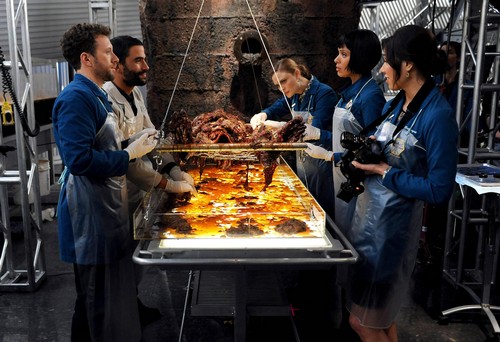 BONES returns tonight with a new episode called “The Repo Man in the Septic Tank” which is kind of self explanatory. The remains of a repo man are found in a septic tank, but the investigation reveals his dark past and more than a few suspects. Meanwhile, a forensic anthropologist from Cuba becomes a Jeffersonian intern after defecting; and Brennan and Booth mull whether or not their daughter should have a religious upbringing.

On last week’s episode when a CIA informant was found murdered, Booth and CIA Agent Danny Beck (guest star Freddie Prinze Jr.) worked together to track down an Afghani terrorist. Meanwhile, Brennan wanted to work more closely with Booth in the field, and the duo had to confront the implications of what that means to their family.  Did you watch last week’s episode? If not then you can easily get caught up because we recapped it in detail right here.

Tonight’s episode looks like it’ll be as fascinating as ever. Guest Cast includes: Dendrie Taylor: Georgia Grace Kevin E. West: Martin Fowler Ignacio Serricchio: Rodolfo Fuentes Chris Coy: Graham Breslin Tune in at 8PM EST on FOX to watch this new episode of BONES. We’ll also be updating fans right here as the show airs so be sure to check back in with us. Brennan and Booth have had a long television run. Do you like that their characters mix up business with home life? Hit up the comments and tell us your thoughts about their tangled relationship!

Booth’s cell phone is literally his best friend. A call about a body in Virginia saved him from having to explain to his wife that, yes, there was a difference between Superman and Jesus. Although finding a body in a septic tank could have been put on hold until at least after breakfast.

The entire subject of religion came up because Booth wanted to introduce Christine to going to Church. He didn’t think it was a big deal seeing as Bones allowed their daughter to get baptized but Bones says that church really wasn’t necessary to their daughter’s studies and so she finds the whole idea of it to be useless. Now Booth knows he has to fight her with logic and since he can’t use his faith – he enlists Sweets’s help in finding logical reasons why the church would be a good idea for their toddler.

Yet he should have remembered that Bones was never going to a medical study conducted by psychologist seriously.

The case Bones is working on is proving to be more annoying than usual. And that’s all down to the new intern helping out on the case. His name is Dr. Rodolfo Fuentes and he is just as skilled as Bones, but his credentials (received in Cuba) means he has to start his entire academic career over. And yet Fuentes refuses to act like an intern.

He uses his smarts and education to sometimes overstep his position. That’s why Bones tried to remind him that he was on the bottom of the totem pole by ordering him to climb into the septic tank. Though her “lesson” appeared to backfire. As in Fuentes ended up finding a clue that proved their victim died from foul play. There was evidence that their victim tried to claw his way out but most of drowned.

The tattoos on the body led it to be identified as Benny. Benny was a career criminal meaning he was in and out of jail. He had druggie mom and never knew who his father was and so he turned to grand theft auto as an outlet. The crime and not the rated M for Mature game. And then something must have changed because Benny got his act together and was even holding down an apartment and a job.

Still someone must surely have had an old grudge against him in order to kill him so callously. Benny was in a car accident right before he was killed. It was a massive wreck and Sweets called it a miracle that anyone could have survived it, but someone chased Benny from the wreckage while he was severely injured.

Deep in pain, he tried to run and was inevitably captured to only be thrown in a crap chamber and die a slow death. But while the team originally thought Benny was run off the road it actually seems that whoever killed him was also in the car with him.

Now Benny used to have a friend from his criminal days who just happened to be released a week before he was killed. This friend, Horatio, was like family until Benny ratted him out during their prison stint. So naturally Horatio is a prime suspect, but why did Benny’s probation officer wait until the very last minute to pass along this information to Booth?

When Booth and Bones went to go check on Horatio; Bones admitted that the new intern told her he wanted to sleep with her. To be fair to Fuentes though he thought all that tension between them was going to lead to sex and merely told her so. But after she told him that was never going to happen he somewhat came to respect her decision. He still flirted yet he kept his propositions to himself.

Booth doesn’t like Fuentes for flirting with his wife. In the back of his mind he clearly remembers Bones telling him she didn’t believe in monogamy. However Bones told him that she would never risk their marriage over a fling.

There was one problem with meeting Horatio; both Bones and Booth didn’t believe he was their killer. Horatio remained Benny’s friend despite what the other man had to do to get release. As matter of fact it was his idea. Benny was getting beaten up so bad in prison that Horatio came up with a plan to get him an early release.

Though he did reveal that Benny was back to stealing cars. Someone was making him do it and he didn’t want to risk Horatio’s life by dragging him into his own mess.

The team had to come up with a new way to catch their killer and were given a lucky break by Sweets. Sweets timed when the thefts were happening to when Benny met with his probation officer. So Booth called the officer down for a “meeting” and while he was going through the security check point; Bones ran an x-ray scan.

His injuries prove he was in the car with Benny when it crashed.

It was all a scam apparently. The officer got Benny to steal cars and was the only one collecting the money afterwards. He knew Benny wouldn’t say anything because he was the one in charge of his probation. So holding prison over Benny’s head got him to comply up to a point.

What changed was Benny. He wanted to get married and start a family. That’s why he wanted out and tried to record his conversation with his extortionist.

Benny didn’t deserve to die but he got caught up in someone else’s greed. And Fuentes opened up about his own past. He defect from Cuba for the money. He left because his father didn’t want him to live his whole life under someone else’s thumb. That’s why Fuentes pursued the American dream. He thought it was admirable that Americans got to make choices for themselves on a daily basis.

And though he didn’t know it, Fuentes helped persuade Bones on the church issue. She realized that she couldn’t deny her daughter an experience simply because of how she felt. Booth may not have like the source but he loved the outcome.