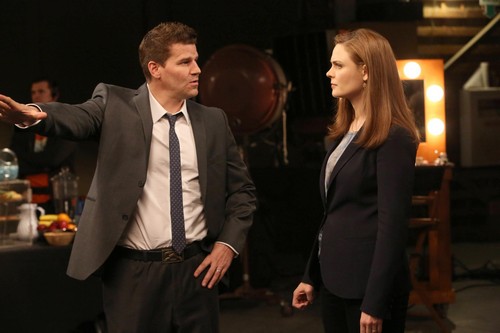 Bones returns tonight with a new episode called, “The Carrot in the Kudzu.” On tonight’s episode the investigation of the murder of a children’s TV icon takes a detour when his reputation for promiscuity emerges, which leads to a long list of unlikely suspects. Meanwhile, Brennan and Booth get ready for Christine’s first birthday; and intern Clark solicits opinions of a novel he’s just written.

On last week’s episode the remains of a repo man are found in aseptic tank, but the investigation reveals his dark past and more than a few suspects. Meanwhile, a forensic anthropologist from Cuba becomes a Jeffersonian intern after defecting; and Brennan and Booth mull whether or not their daughter should have a religious upbringing.  Did you watch last week’s episode? If not then you can easily get caught up because we recapped it in detail right here.

On tonight’s episode When a children’s TV show actor is found dead, the Jeffersonian team goes behind the scenes to uncover who murdered everyone’s favorite character, “Carrot Bill.” But when the team discovers that the actor was known for his promiscuity, they start to uncover some unlikely suspects. Meanwhile, Booth and Brennan plan Christine’s first birthday party, and Clark (guest star Eugene Byrd) asks the team for their opinions on a fictional novel he’s completed.

A most usual body was brought into the Jeffersonian Institute. Human remains were completely covered in what appears to be a growing plant. Whatever these vines might be, they happen to be growing so fast that they consumed most of their victim’s bodily tissues and it’s hard to get a clear picture of the remains. Now tricky plant and/or bug life tends to be right in Hodge’s field, but even when he tried to kill the plant all he managed to do was ruin the skull structure. As in it fell apart in front Bones’ very own eyes despite Hodge’s reassurances that “he got this”!

Clark is interning this week so he’s gotten the tedious task of reassembling the skull from scratch. Timing is everything and apparently the rest of the interns were out this week doing extra credit up in Buffalo. And so Clark gallantly stepped in however he was in a much better mood before Hodge’s mistake. You see he wrote a book and he really wanted to show it off to the rest of the team.

That could be real reason behind why he volunteered. Besides pushing his book on his co-workers. Clark gave Hodge and Cam both a copy and frankly they’re nervous about reading it. They’re scared his book will suck and they don’t want to be the ones that’ll hurt his feelings. That’s why they were trying to tell him to get Bones to read it instead. It’s not like anyone expects consideration from her.

And they do have a point there! Bones is blunt to say the least. After they found out their victims’ identity; she went along with Booth to inform the family members. So how do she choose to announce it – she interrupts his brother, Ken, in the middle of filming for his kids show to tell him that his brother was murdered and the dancing corn behind him is actual not a vegetable.

Ken and Joe were both apart of the hit children program. That is before the victim left the show to pursue a solo career. The career tanked when his new show was suddenly dropped. And Joe was later seen getting into a brutal fight with the producer responsible for pulling the plug.

But to be fair to Bones, she might have had a grudge against the dancing Vegetables Band. Her daughter loves them and Booth had suggested that maybe they should use some of that for Christine’s first birthday. Booth and Bones have been fighting over this birthday because Booth wants to throw a party and Bones can’t understand the significance in doing so.

It seems her parents never gave her a party and she was fine with that seeing as people on the run don’t generally want to draw attention to themselves. Yet now with her own daughter having a lot more than she’ll ever have; she’s started to rethink how much she missed out on. Sweets gets it. He also never had a birthday party, but he wisely chose to stay out of Booth and Bones’ fight this time. Though Sweets did tell Booth to let Bones comes to terms with the party on her own.

Meanwhile, Cam and the rest of the guys started to read Clark’s book and were forced into putting it down. The book was so bad it started to depress them.

Joe was a jerk and he sure loved sleeping around. So much so that he was willing to risk death just to keep up his reputation as a ladies man. Joe had a heart condition in which he needed to take medication for, but he stopped taking them once they interfered with his favorite sport.

That got Booth thinking about the what ifs. Like say if someone were to find out about his condition then they would know how to kill Joe. All it would take is to scare him to death.

Well, his brother most likely knew about the condition. He probably found out about it not long before he realized Joe was also sleeping with his wife. Joe the jerk couldn’t even let things stop there. He came close to stealing the hit show from behind Ken’s back – when his own show failed he tried crawling back to the band and went as far to negotiate with the guy that replaced him.

But, and this is a shocker, Ken didn’t kill his brother. He had every reason to and still chose to take the higher road. No, an obsessed fan was the one that killed Joe. She never understood why Joe didn’t want to sleep with her when he slept with practically anything that moved. So one day she honked her horn to gain his attention and that frightened him so bad he died on the spot.

It couldn’t have happened to a better man!

In the end, Bones picked a simple birthday for Christine rather than a large production. Christine enjoyed it and Booth still found a way to add some pizazz. He showed up as a one man band! And as for Clark, his friends didn’t have the heart to tell him the truth about his book. Especially after they found out that it was getting published. Saying anything after that would have been cruel.