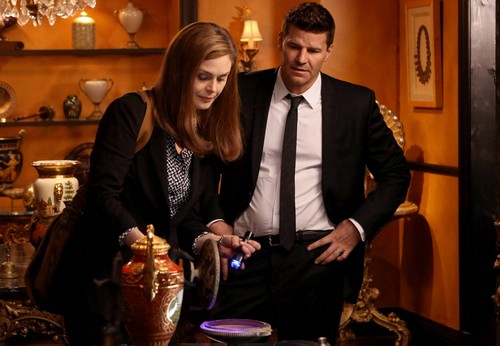 Bones returns tonight with a new episode called, “The Turn in the Urn.” On tonight’s episode three people’s remains in a single urn confound the Jeffersonian team after a wealthy artifact collector walks into his own funeral. Meanwhile, Finn and Hodgins strike it rich with their hot-sauce venture, but Finn’s enthusiasm is tempered by devastating news from Michelle.

On last week’s episode when a children’s TV show actor was found dead, the Jeffersonian team went behind the scenes to uncover who murdered everyone’s favorite character, “Carrot Bill.” But when the team discovered that the actor was known for his promiscuity, they started to uncover some unlikely suspects. Meanwhile, Booth and Brennan planned Christine’s first birthday party, and Clark (guest star Eugene Byrd) asked the team for their opinions on a fictional novel he had completed.

On tonight’s episode a wealthy artifact collector, walks into his own funeral, the Jeffersonian team must find out to whom the cremated remains at the funeral belong. The investigation gets complicated when the team determines that there are three sets of remains in the urn. Meanwhile, Finn (guest star Luke Kleintank) enjoys his newfound wealth from his hot sauce venture with Hodgins, but is heartbroken when Michelle (guest star Tiffany Hines) has devastating news for him.

The strangest things seem to happen to Bones and Booth. Only they can attend (or in Booth’s case reluctantly attend) the funeral for one of Bones’s biggest benefactors when as it turns out the billionaire hedge fund manager in question wasn’t in fact dead. No one even realized they had falsely identified the body that is until the real Todd showed up.

He would have come sooner but Todd was in Costa Rica and hadn’t heard about his own death till he got home. He was going through rehab which he was also kind of hoping would remain a secret hence the fake name he used and the fact he told no one where he was going. Plus the rehab cut off all contact with the outside world so he wouldn’t have seen the media coverage anyway.

So he was very surprised to return home just in time for his own funeral. Now his “resurrection” begs the question of who was actually cremated in Todd’s place?

Finn is back from his studies in Boston and it’s a good thing too because Bones is going to need a lot of help identifying a body from its ashes. And the trouble only began there. Todd’s mother tried to cut cost and had her son cremated and the cheapest place she could find and the people she hired half-assed their job – they happened to mix up several people’s ashes.

One of the bones also turned out to be from an animal. How is Hodge supposed to deal with that?

Luckily Angela proved to be handy with that machine of hers. She used the medical examiner’s photos and was able to learn who the mystery man was. His name was Daniel and he was allegedly a great friend of Todd’s and had even worked for him.

But he did some pretty shady things for a supposedly good friend. On the night he died, Daniel broke into Todd’s place and dismantled the cameras. Booth thought Daniel must have been trying to steal something, but Todd assured him that his friend had no reason to steal. He always treats his friends to the best.

Although what did his “friends” have to do in return for such generosity? Daniel did things for Todd. Whenever Todd had something he didn’t want to deal with he would then send in Daniel. That’s why his own mother took out a restraining order against the man.

Now she was stealing from her son. And the mother would have continued to steal if it were not for Daniel. He blocked her from entering the house because that was just one part of his job and the same way he cut off mommy dearest was the exact same thing he would do to Todd’s “women”.

So Daniel did make a lot of enemies, but no one believes he was killed for these reasons. The team thinks he was killed because he was carrying around “The Slaughtered Chalice”. They know he was killed by a blunt trauma to the head and the fragments they found appeared to belong to a valuable artifact. So valuable that people have been looking for it for centuries.

It’s gotten the name because of all the people that have died trying to possess it and currently evidence is pointing towards Daniel finding it and getting killed over it. But there was a recent addition to the chalice – the team found diamond powder on the fragments from Daniel so they simply assumed that whoever acquired it must have altered it.

When the truth is the diamond powder didn’t come from the chalice. It came from the person that used it as a weapon.

Todd had admitted to killing Daniel and Booth (who has his own prejudices against the rich) was quick to take his confession. However Todd only confessed after hearing about the diamond powder. He did it because he was trying to cover for his girlfriend.

The diamond powder came from an expensive manicure.

The girlfriend was bringing over the chalice as a gift for Todd for getting through rehab, but when she showed up she found Daniel bringing drugs into the house. So she got mad and just hit him. It really was an accident. She didn’t know she could hit him that hard.

Women never do. Finn had to keep going with the investigation even while he had to get over Michelle. She broke up because she wasn’t ready for a big commitment but did she have to add the part about seeing someone else. That was below the belt!