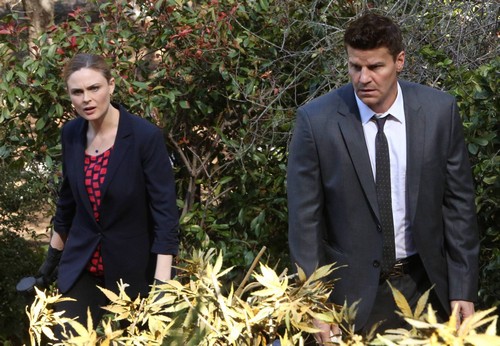 Bones returns tonight with a new episode called, “The High in the Low.” On tonight’s episode remains found in a log in a forest belong to an art-school dropout who had lupus, and the investigation reveals marijuana use to ease her pain, but her work at a dispensary may have had something to do with her death. Meanwhile, Wendell Bray reveals information about his illness; and Booth gets ready for his FBI competency test.

On last week’s episode a wealthy artifact collector, walked into his own funeral, the Jeffersonian team had to find out to whom the cremated remains at the funeral belonged. The investigation got complicated when the team determined that there were three sets of remains in the urn. Meanwhile, Finn (guest star Luke Kleintank) enjoyed his newfound wealth from his hot sauce venture with Hodgins, but was heartbroken when Michelle (guest star Tiffany Hines) had devastating news for him.  Did you watch last week’s episode?  We did and we recapped it right here for you.

On tonight’s episode the Jeffersonian team investigates the death an art school dropout struggling with Lupus, whose remains were found inside a log in a forest. When the team learns about the victim’s use of cannabis to treat her pain, it leads them to the dispensary where she worked, and they uncover more shocking details that could have contributed to her death. Meanwhile, squintern Wendell Bray (guest star Michael Grant Terry) returns after starting cancer treatments, and while working on the case, he starts to open up more about his illness, only to reveal some shocking news that may end in his termination. Also, Booth preps for his FBI Competency tests.

This week’s case involves a young woman by the name of Abby Briggs. She was once a Lupus patient that had recently started to work a Cannabis dispensary. She took the job there because she wanted to help other people that were suffering. And now it looks her new job might have led to someone murdering her four months ago.

Abby’s body was found by a prison escapee. He was looking for a place to hide from the tracking dogs and thought why not inside of a log. However once he saw a decomposing body taking up residence – he then begged the surrounding officers to take him back to jail.

There’s been a lot of bad weather lately and that sped up the decomposition. By time the body was found, the bugs had done a number on it. It ruined her features although with the new simulator, nicknamed Theo by Angela, they were able to identify her. And her sister, Mallory, filled in the rest.

Abby was just a little bit more than helpful at her new job though. She also happened to be extremely vigilante in making sure that it was the only the sick that got their hands on the cannabis. While college kids looking for a high were immediately turned away.

Booth questioned one of these kids and he honestly doesn’t feel like the kid is capable of killing anyone, but the suspect mentioned how he was kicked out of the store by the security guard. The guard had gotten rough with him and the scar he’s still carrying around is similar to that on Abby’s body.

Someone knocked her around with at first looked like the bud of a flashlight and though they thought it could be her co-worker – it wasn’t. Sure, he had a crush on her, but that’s about it and the crush didn’t even last long. He started to pull away after she started pull away.

The security guard called her secretive. He said that her conversations with clients would sometimes suddenly stop the moment he entered the room. Though he admits he didn’t know why. Well, Hodge helped the team there when he identified where Abby was killed and that led to the big secret she was hiding – she was growing her own pot. And someone had stolen half of it.

But the pot Abby was growing had all the benefits of helping patients without getting them high in the process. Maybe if Wendell had been allowed to take something like Abby was growing then he wouldn’t have found himself without a job.

Wendell returned to work as if everything was normal. Yet once this case started to bring up questions about pot and medicinal use – he felt so guilty that he broke down and informed his superiors such as Hodge, Bones, and Cam that he was using these products to help combat his chemotherapy. And while some people certainly understood his situation; Cam was forced by protocol to fire him.

Pot is illegal on the federal level and Cam couldn’t overlook Wendell’s usage even though he has been doing nothing, but exceptional work since he came back.

If it wasn’t for Wendell then Bones wouldn’t have been able to find yet another mark on their victim’s body. Abby had so many cuts and they all appeared to be from the same unusual weapon. When Angela looked up this weapon up it led to the same college student from earlier. The one that Booth was quick to dismiss as a suspect.

This kid had killed Abby with his writer’s award that he had received from his university. He killed her with it and the returned to his parents’ house. He went through all of this so that he could steal her pot, but the joke ended up being on him. He stole her medicinal only pot and his customers soon deserted him when they couldn’t get high off of it.

So really, Abby died for nothing. Because with her death there went the formula for her special brand.

As for Wendell, Booth let go of his preconceived notions in order to help his friend. He approached Caroline and she got Cam to hire Wendell on as a consultant. That way Wendell can still hang around the lab and as long as he doesn’t touch any evidence then their cases won’t be at risk.

Booth is typical a stickler for the rules but for once he was able to bend and that’s possible what helped him passed his FBI competency test. It made him flexible.