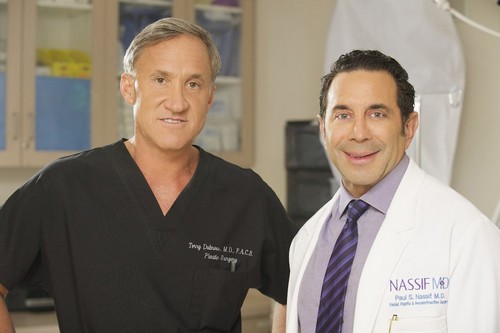 Tonight on E! Botched continues with an all new Monday, October 27 season 1 episode 10 called, “Show & Tell” Reunion Part 2 On tonight’s episode, in part 2 of the reunion and the conclusion, Terry and Paul are reunited with some of their patients from Season 1 and get a look into season 2.

On the last episode Terry and Paul were reunited with patients from the first season. Did you watch the episode? If you missed it we have a full and detailed recap, right here for you.

On tonight’s episode, in the conclusion of the reunion, Terry and Paul recall the highlights of Season 1 and continue to reunite with several patients. Also: a sneak peek at Season 2.

Tonight is going to be another crazy episode that you won’t want to miss, so be sure to tune in for our live coverage of E!’s “Botched” tonight at 9PM EST! Meanwhile, while you wait for our recap, hit the comments and let us know how excited you are about this reunion special?

Justin, the living Ken doll, has had 132 cosmetic procedures. “I basically look at plastic surgeons like glorified tailors,” he says.  Maria Menounos asks him about this and he says he can see the veins in his face when he moves and he wants to get them fixed. Lacey is worried about him and doesn’t think he should get this surgery because it’s risky and he could get an infection.

Maria brings up that meanwhile, her breasts (which she plans to enlarge even further) are “about to burst” and he has doctors warning her to stop.

Toby, the man who is transforming himself into a Justin Bieber lookalike, talks about how he wants to stay young as long as possible and uses procedures that are illegal in the US but legal overseas. The doctors say there’s a reason the US has good medical care. They go on to say they don’t approve of procedures intended to make someone look like another person.

They talk about the fact that the doctor who continues to enlarge Lacey’s breasts makes her sign a nondisclosure agreement. The doctors explain that

The doctors explain that they don’t think these patients have body dysmorphia because he is choosing to do this and it isn’t a need for him. It’s a project that he continues to work on.

Justin is now doing custom implants for people who inquire, which concerns the doctors. Maria asks Toby if he would ask Justin for advice on implants and he says yes because he’s done it all.

Lacey, who is a triple-L, has been having sternum problems. Maria sarcastically responds that she should get them even bigger. Lacey brings up her Brazilian butt lift, which she got by fat transfer from other parts of her body.

“I think throughout my life I’ve been under anesthesia for a little over a week,” she says, and the audience gasps.  Maria asks if she found a doctor that will go as big as Dr. Dubrow would not go. Lacey says yes, her new doctor is willing to go up to a triple Q. Dr. Dubrow warns all three of them that although he’s a fan of all of them, if they continue to do this, it’s a matter of time until something goes wrong.

Kimber talks about how the decision to transition was made for her at 12 by her mother, which Dr. Dubrow says is a little young, though it was obviously a best decision for her. Kimber agrees that it is not the best decision for everyone.

Janice Dickinson comes in, and Maria asks Dr. Debrow if he can separate the patients from their attractive bodies, and he says of course because a patient is always a patient and he remains professional. Janice calls him “the best doctor in the world” and says she would love to work in his office.

Maria mentions when Janice first got her breasts fixed and said she wanted to get on a pogo stick. They take out a pogo stick and Janice actually gets on it. Maria has to catch her when she almost falls over. She talks about all of the crazy physical challenges she’s gone through in her life as a model. “Pogo sticks? Nothing. I could have done that while having birth naturally,” she says.

On the second part of tonight’s Botched Reunion, guest host Maria Menounos asked Paul and Terry whether or not they were afraid their show would turn people off of surgery. And you know what, that’s exactly what Terry is hoping will happen. So many times people think plastic surgery is no big deal and in actuality it’s a life changing decision.

It’s not like doing you hairs or your nails. It’s having someone cut into you and that should be taken seriously at all times. Find the right doctor and don’t be pushed out of your comfort zone!

Besides the seriousness of the show, there’s also the relationship between Paul and Terry. They’re very good friends in everyday life but often they sound more like an old married couple whenever you watch them on TV. So Maria told them how funny they were together. And because of that they always seem to make a good team.

But despite their best efforts, they’re still a few criticisms. And that’s where Michelle Blackwell comes in. She was an actress with a collapsed nose and it was Paul’s job to fix that nose. However, a few hours after surgery (it wasn’t a full a day), Michelle was already telling Paul one her nostrils still needed to be tweaked. It wasn’t the home run she had originally asked for.

In her own words, his work was more like third base.  Close, just there! And she also had a few things to say after she saw the footage of her surgery. Paul had said her bones were that of a 40 year old and Michelle claims she’s 35 and not a day over. Now Paul told her the bones don’t lie but if Michelle is still saying she’s 35 – who can really argue with that!

Another tough case for Paul and Terry was Monique Allen. Monique had liquid cyclone injected throughout her body while she was in Mexico and because of that she’s honestly became disabled. She can’t walk long distance and most of the surgery she’s been doing recently is corrective. She merely fixing all the things the cyclone did. And making music in the progress. Which Maria can appreciate because apparently she likes some of Monique’s music.

Then there was Desiree White. Like Monique she went to Mexico for her surgery and like Monique she came to regret it. Rather than use anesthesia, her doctor chose to sedate with a block of ice and while she was lucky she didn’t die from that – she woke up with her vagina practically in her stomach.

Hence Desiree needed the guys help just so that her vagina could be located where it’s supposed to be. This time, though, her mother made sure to grill Terry about his credentials. She hadn’t done that with the first surgery Mama couldn’t afford to let what happen in Mexico occur a second time. So, truthfully, Desiree’s mom was a bit scary with her all of her questions but after what her daughter had lived through – Terry was able to understand why his work was being viewed under a microscope. The family simply needed reassurances.

And in probably the toughest case the guys ever had to face, there was Alicia Jenkins. Her breast implants were done by an incompetent doctor and so she had formed a uni-boob. As in her two breast merged together at one point and that was causing Alicia a significant amount of pain.

She couldn’t even pick up her toddler because any form of movement tended to hurt. Her botched surgery affected her life with her son and with her husband. But once she had fixed – everything started to improve. She was able to overcome her depression. And start picking up her son again.

Before, she was worried about how the restrictions was affecting him and now she’s feels she’s back to supermom which was what she always wanted to be.

Alicia’s surgery was toughest Terry had ever done yet she was by far not his toughest patient. That title belongs to Janice Dickinson. Who happens to continue to be a patient of Terry’s. She first went to see him to re-do her breast implants. A little known fact is that breast implants have to be updated every 5 years. And Janice hadn’t changed hers in over thirty.
But the second she was put on sedative for the pain, Janice turned into a whole new person. Her age old addiction to drugs had reared its ugly head and had made Janice act out during her recovery period. Later on though, she calmed down some.

So although she’s still wild and out of control Janice, she’s back to manageable. And Terry sees her every once in a while to give her fillers for her face. In other words, his life is not completely free of her. Yet there is good news thanks to her. Janice’s surgery and many others like hers turned out to be inspiring. Hence the show has been flooded with request to fix other individuals’ botched surgeries.

Season Two is around the corner and if the Sam and Terry simply use everyone they’ve shown in video requests – then I for one can’t wait to see what happens with the woman missing a nipple!