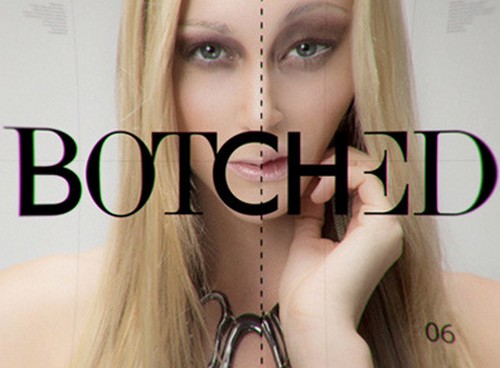 On the last episode a woman with uneven breasts; awake for a tummy tuck; Lacey Wildd wanted to upgrade her implants. Did you watch the episode? If you missed it we have a full and detailed recap, right here for you.

On tonight’s episode in the Season 1 finale, a transgender pop star needs her pixie ears fixed before shooting a music video; and a model goes under the knife to correct under-eye bags. Also: Paul provides the finishing touches for a patient born with a birth defect.

Tonight’s episode of Botched begins with Monique Allen. She was born a man, and when she was 18 she announced to her parents that she was getting a sex change. She started going to clubs and met a producer, and started recording songs like “The People’s Tranny” and “Pop My Kitty.” She had her first face lift at 29 years old and since then she has had over two hundred surgeries. But, she wishes she never got shots of liquid silicone. She got it in her hips, butt, breasts and now it is ten years later and the silicone is leaking and shifting.

Monique heads in for her consultation, she reveals that she has had eight breast procedures and forty-five procedures to remove the free-floating silicone from her body. She had it injected in Tijuana and the doctors are horrified, because free flowing silicone is very dangerous and can leak or cause infections, she could lose her limbs. Right now she wants the doctors to fix her ears because they are pulled down, and fix her stomach because it is disfigured from injections and losing weight.

Up next is 28 year old Kelly. She was born with a cleft lip, and had multiple surgeries when she was a child. She had such a bad under-bite that they had to break her jaw and then wire it back in to place. When she got older she was self-conscious of the scars from her surgery and when she was older she decided to try and get it fixed, but the fillers in her lips make her smile droopy. When she got married they didn’t even have a big wedding and just went to the courthouse, because Kelly didn’t want to take any wedding photos.

Kelly heads in to her consultation with the doctors, Dr. Nassif warns her that they can’t make her nose perfect, but they can definitely improve it and fix her deviated septum. After examining her they realize that her septum is going in two different directions. They want to take skin and cartilage from her ear, and use it to rebuild her nose. If she doesn’t have enough cartilage in her nose, then they might have to take some from her ribs.

Monique fills her friends in on her consultation with Dr. Dubrow and Dr. Nassif. She reveals that she is going to get a tummy tuck, so that she can fit in to some of her old costumes. They are concerned about the procedure but she reassures them everything will be fine because she is “invincible.”

The next day Monique heads in for her surgery, and Dr. Dubrow scrubs in. He is nervous about running in to silicone when he cuts her stomach open for her tummy tuck. The silicone is old and he doesn’t want to cut in to any of the silicone and cause an inflammatory reaction. His worst fears are met when he cuts her stomach open and realizes she is full of silicon. He completes the procedure and stitches her up and Dr. Nassif comes in to fix her ears. Dr. Nassif stitches her ear lobes and gives her a quick neck lift.

The next patient to pay Dr. Nassid and Dr. Dubrow a visit is Myesha. She had huge dark permanent bags under her eyes, so she went to Mexico and got injections of an unknown filler. It was supposed to fill the bags under her eyes, but instead it made them worse. They agree to take her on, and plan to cut incisions in her lower eyelid and pull the bags up.

Kelly heads in for her surgery, and her husband Leonard is extremely nervous, he doesn’t want anything to go wrong. He walks her to the operating room, and Dr. Nassif and Dr. Dubrow get to work. They open up her nasal passage and rebuild the tip of her nose. Dr. Nassif is certain that she is going to love her new nose.

Monique heads in for her four day check-in and they remove her bandages and see how she is healing. Dr. Nassif is shocked by how quickly she is healing, and she has no bruising in her face. Monique thanks them and dubs them the “Kings of Plastic Surgery.”

Myesha heads in to surgery and dances her way to the operating room because she is so excited to have her bags removed. Dr. Nassif and Dr. Dubrow prepare to make the incision, and are shocked by how huge her fat pads are under her eyes. Whatever the doctor in Mexico injected into her eyes definitely caused the fat pads under her eyes to swell even larger. They remove her fat pads and pull the skin up tighter under her eyes.

Myesha is completely healed and she heads out to meet up with her friends and reveal her new bagless face. They all hug her and congratulate her and gushes about how happy she is with her new face. She can’t wait to hit up all of the modeling agencies in Los Angeles and try to land a gig.

It’s time for Kelly to reveal her new nose and lips, and she will be doing so at her and Leonard’s vow renewals. She is excited to walk down the aisle for the first time and have everyone stare at her, and she plans to put all of the pictures from their wedding day up all over the house. Since the surgery Kelly is much more confident than she used to be, and Leonard is happy that she is happy.

It’s time for Monique’s video shoot, and she is excited to show off her new ears and tummy. She feels great and she is “ready to rock and roll.” She steps out on set and her friends are amazed at her transformation. She loves her tummy’s shape and contour, and there isn’t anything else she could have wished for.