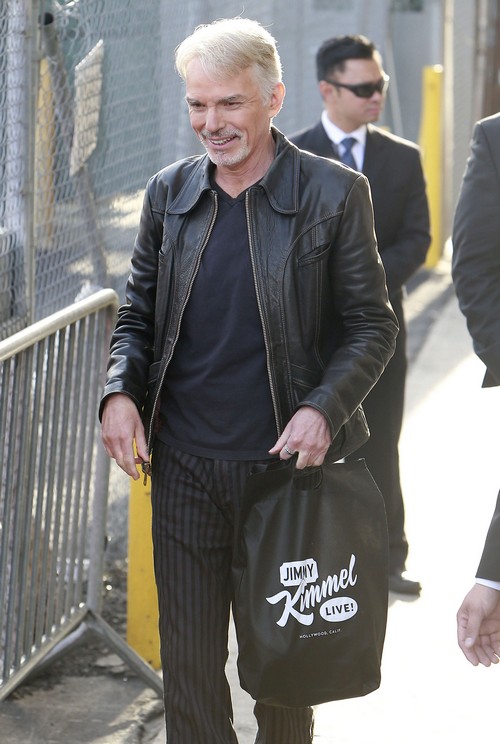 Has Brad Pitt ever come off as the type to go all insecure and jealous on Angelina Jolie? For one, he’s the one who left another woman for Angelina, so if anyone has reason to be insecure, it’s Angelina. Honestly speaking, I don’t think either of them have any ounce of doubt about the other’s loyalty, but let’s humor the tabloids. According to several new reports, Brad is extremely shocked and upset at how close Angelina is to her ex-husband, Billy Bob Thornton. Never mind that Brad has known Angelina for more than a decade now, and this issue has seemingly never come up before. Still Brad may well fear that Angelina is cheating with her ex especially given her proclivity for kinky sex – the type of activity that Brad just into.

Apparently, Brad got jealous when Billy admitted in an interview that he and Angelina still remain close and talk on a regular basis. A ‘source’ tells the National Enquirer, “Brad has always been jealous of Billy Bob, and he hit the roof when he heard that Billy Bob was shooting off his mouth about her. Brad has let Billy Bob know he needs to ‘get over’ Angelina once and for all. And he’s told her to stop talking to him.”

See, this is a little different than what the reports were initially suggesting. Even though I don’t believe that this happened, Brad telling Billy to stop hawking his mouth about Angelina is different from telling Angelina to stop talking to her ex-husband. For one, I don’t think Angelina’s the type to take orders from Brad, even on the matter of her exes. For another, I don’t think Brad and Angelina even have Billy’s interviews on their radar. Brad and Angelina are careful about their press, but if they responded to every Google alert on their name, they would never get any rest.