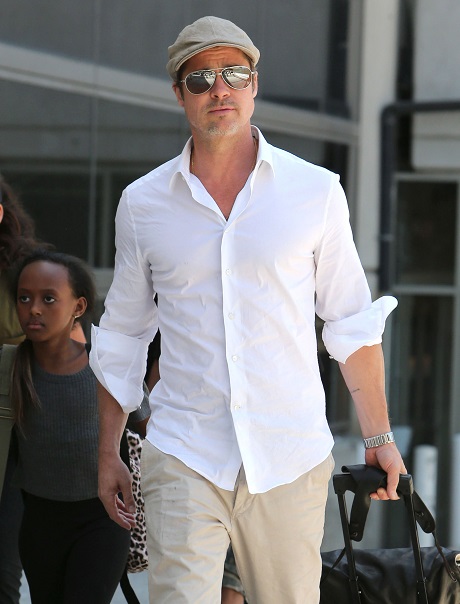 Considering the fact that Brad Pitt and Angelina Jolie run in the same circles as Jennifer Aniston, it’s kind of amazing that they so very rarely run into each other, isn’t it? There was a very close call recently at a West Hollywood eatery called Ago.  Brad and Angie arrived first and were led to a private area to enjoy an intimate dinner. About 30 minutes later, Jen also showed up with her friend. According to the July 21st print edition of In Touch Magazine, the staff at Ago scrambled to make sure that Jen was ushered to the opposite end of the restaurant.

Sources say that Brad was clued in to what was happening and tipped his server very well to ensure that the situation was handled. Angie apparently didn’t catch on at all. Despite being on the other side of the restaurant, Jen also caught on quite quickly and was mortified. Her upset seemed to come more from the fact that she was dining with a man and still came across as the pathetic woman left in the dust. Eventually, Brad and Angie left through a back door, easing the tension. Unfortunately, Jen’s night was still ruined and she was clearly uneasy — right up until the moment that she left.

The last time that Brad and Jen came face to face was back in 2009. Do you think that the fact that they purposely avoid contact only fuels the talk that still surrounds them? Would they be wiser just to let the press see them talking once and for all? Might that kill some of the interest in their personal lives? Tell us your thoughts in the comments below!