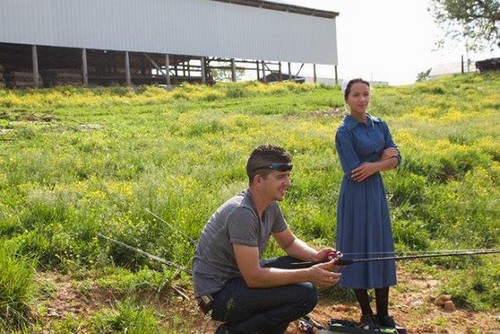 Tonight on TLC Breaking Amish returns with an all new Thursday September 25, season 3 episode 2 called, “On the Run.” On tonight’s episode drama ensues as the group prepares to leave the Amish world for New York City.

On the last episode, a group of five young Amish men and woman had decided to make a move that will change their lives forever, risking everything and everyone they’ve ever known, But the group found out early, chasing their wildest dreams may be easier said, than done. Did you watch the last episode? We recapped it all right here for you.

On tonight’s episode Drama ensues as the group prepares to leave the Amish world for New York City. With the reality of leaving home and everything they’ve ever known setting in, some of them learn the past they are trying to leave behind may be coming along for the ride.

The actuality of leaving home was the worst part. No one wanted to tell their families about the cameras and the documentary they were going to be filming. Just telling them they were going to New York otherwise known as the devil’s playground caused enough trouble. And so for the most part they pretty much left TLC out of the discussion.

But things got complicated for Bates. His grandparents were driving pass one day and they caught him with his Ex-Amish girlfriends and cameras surrounding them. So they’re bound to have said something to his parents.

Though Bates did try to beat them to the punch. He was going to speak to his mom beforehand and luckily for him she was out of the house at the moment. Hence he didn’t have to worry about getting into trouble because he was able to flee without having another talk with his parents.

Then there’s Miriam who’s walking away from her little boy. Although the trip is only meant for a couple of weeks – Miriam is taking quite a risk by leaving her son behind. On the one hand she wants to make a better life for her son and that’s why she’s choosing to go, but on the other Miriam happens to be a single mother and her son depends on her the most. So separation isn’t going to be easy for him.

Plus this arrangement is messing with his routine and at the end of the day his aunt, who he’ll be staying with in the meantime, won’t be able to protect him against the gossip about his mother. So what’s going to occur when a little boy who is angry at his mother also hears other people angry at his mother? Hmm… seems like that scenario could sway his opinion.

Miriam is already shunned for being an unwed mother. If she leaves to go to New York of all places on top of that – there might never be a possibility of her rejoining the church. And her family who will have custody of her son aren’t going to like that!

There’s simply too many ways this could go wrong for someone in Miriam’s position!

And the other adventurous Amish aren’t faring any better. Matt is leaving a pregnant wife and her past infidelity remains an issue between them. So shouldn’t worry about what will happen to his wife now that she’s all but been abandoned. Because that sound like a recipe for disaster.

Also his parents didn’t really take his leaving that well either. His mom who has never acknowledged his past or adoptive parents was suddenly willing to hand over his adoption papers. That could be a sign of acceptance or rejection – Matt never really got an answer.

So he left and soon he joined the others for the train ride to New York. Matt and Bates became fast friends and yet one of the ladies was apprehensive about Matt. Vonda know about him from his reputation and he’s known for being a certain way around women. She doesn’t go into details but she also doesn’t want to be close to him.

Miriam though is prepared to give him a chance. Meanwhile Bates, who used to date one of her sisters and according to lore, quickly goes to a private corner with Matt to gossip. According to lore, neither of the sister follow the no premarital sex rule. Miriam had a child outside of marriage and he claims to have had a one night stand with her sister. Then Bates mentioned to Matt that if she’s anything like her sister – it’s going to be a wild stay in the city.

And Matt, the married man, appeared to be very happy about the rumors. Everyone else thankfully chose to focus on the trip. New York is a dangerous city and from the get go the gang chose to be supportive of each other. As in they promised to look after each other.

Yet, on their first day in New York, they didn’t have that much faith in protectng each other because their hostel looked like it was in a shady neighborhood. And no one wanted to die!