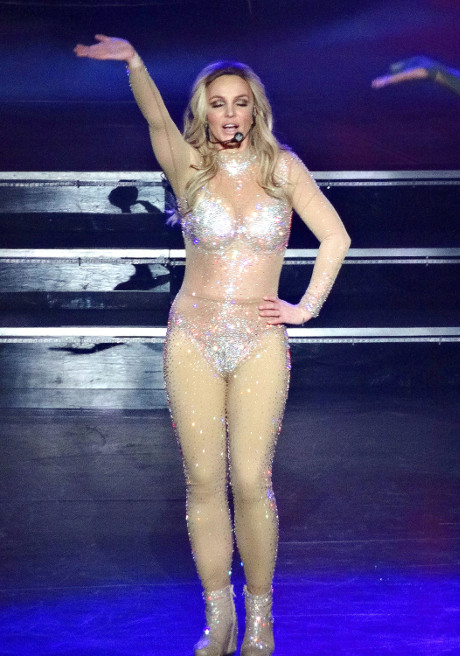 Britney Spears’ Vegas show is bringing out all the celebrities and making the critics fairly happy. However, the show is leaving some super-fans a little disappointed. Fans who purchased the $2,500 VIP package say the experience was not worth the price or their time.
The package included front row seats, free parking, Britney merchandise, and a laminated certificate. The selling point of the package was that fans would spend a little time with their girl, Britney Jean, backstage. But the experience was less than they expected.

“Fans were told before the meet-and-greet that they were not to hug or touch Britney without her permission and they weren’t allowed to bring her any gift,” a source told RadarOnline.

A little time with Britney is all they got, too. Reportedly, each person who paid the $2,500 only spent three seconds with the singer. She smiled, took a picture, and then said buh-bye. As fans joyously expressed their adoration, all she did was nod and say “thank you.” She failed to actively engage in the conversation.

They were even disappointed with the wig she wore. One fan tweeted: “Britney meeting a fan in Vegas with a scary wig n sad eyes :’(((((“

“Fans were anticipating a flashy meet-and-greet with Britney but instead it was just awkward and uncomfortable,” added the Radar source. Britney hasn’t been much of a talker for the past few years. She often appeared distant in interviews and in candid paparazzi footage. She barely even acknowledged her mentees when she was a judge on The X Factor. Simon Cowell even said it was a mistake to hire someone who “doesn’t talk.”

However, she surprised us all during her recent promo tour for the Vegas show and album, Britney Jean. She was so bubbly and happy. Just like old Britney. Maybe she’s all talked out. But fans do deserve a memorable experience if they are going to pay that much money. Even meeting a few of the back-up dancers and learning some choreography or being able to walk on the stage after the show would do.

What are your thoughts on Britney’s VIP package? Should Britney be more friendly or should the fans suck it up and continue to pay $2,500?