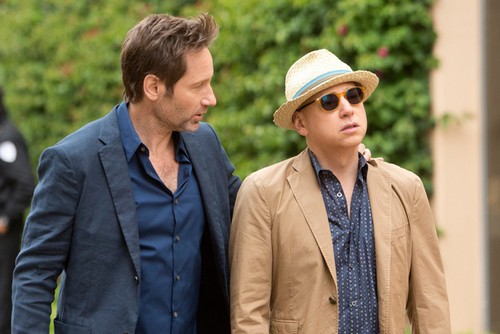 Tonight on Showtime Season 7 of CALIFORNICATION airs with its premiere episode called, “Levon.”  This season after blowing every chance at love & happiness — and burning every bridge in Hollywood — Hank Moody is finally ready to put the past to bed. But as always, old indiscretions turn up to bite him squarely in the ass. Could it be too late to pull off a happy ending?

If you have never watched the show before when fast-living novelist Hank Moody left the literary haunts of New York for the pleasure seeking splendors of L.A, he thought he’d have fame, fortune and the love of a good woman. Now his personal life is in shambles, his career is on the brink of self-destruction and he still just can’t stop yielding to every temptation. Golden Globe® winner David Duchovny stars in the Showtime Original series that takes you on a wild, witty, and sexy ride in the California fast lane.

On last season Hank collaborated on a musical with a rock star while taking up with his beautiful muse; Charlie and Stu competed for Marcy; Marcy fell under the spell of a radical feminist; Becca dropped out of college to become a writer.

On tonight’s episode season 7 begins with Hank eager to reunite with Karen, the love of his life, but things don’t go quite as planned. Meanwhile, Hank gets hired by the “Santa Monica Cop” showrunner; and a reporter asks to interview Hank for his college paper.

Tonight’s episode looks like it is going to be great and you won’t want to miss it, so be sure to tune in for our coverage of Showtime’s Californication at 9:30 PM EST! While you wait for our recap hit the comments and let us know how excited you are about the new season?

After blowing every chance at love & happiness — and burning every bridge in Hollywood — Hank Moody is finally ready to put the past to bed. But as always, old indiscretions turn up to bite him squarely in the ass. Could it be too late to pull off a happy ending?

The first episode of season 7 starts off with Hank showing up at Karen’s house. At first, he has a dream of what could be when she answers the door and it includes her being shocked that he is back and asking why he is at her home. He tells her he came back for her. She smiles and begins kissing him passionately. Alas, he woke up from that daydream. He continues to wait at the front door. He looks through the window when she doesn’t answer. Desperate to see her, he waits on the patio and calls her from his cell. He leaves but continues on to see if he can find her. Finally, he finds her in a small café and goes in to see her. When she is surprised to see him, saying the same comment from his daydream “What are you doing here, I thought you ran off with the rock-n-roll circus?” He replies as he did in his fantasy with “I did, but I came back for you.” Instead of the passionate kissing that followed in his dream, she seems suspicious. He goes on to explain that he felt she might need help and she shouldn’t be so far away. He begins to confess his love for her and explain how they need to work together to finally get things right. Just then, they are approached at the table by a man and Hank is embarrassed to find that Karen has met someone from her yoga class there for coffee. It was a very awkward moment. Hank begins taunting him when he asks him if he farts in yoga class during a hot steamy Bikram yoga session. The man tells Karen that he is leaving and they can do it another time. Hank and Karen continue to talk, but Hank is not happy when things are not turning out as his dream had.

Hank meets up with Charlie for drinks. Hank tells Charlie about what happened with Karen. Charlie shares that he and Hank have just been fired. When Hank shares his need for a job, Charlie tells him to give up on that thought for now as he has pissed absolutely everyone off and no one will hire him. He tells Hank the only offer he has for him is one from a college student who wants to interview him. Hank asks Charlie about his Honeymoon and it doesn’t sound as though it went too well as Charlie clams up and shakes his head looking down in his drink. Hank ends up bringing Charlie home to Marcy who is not too happy about Charlie’s drunken state. She ends up blurting out that her new husband cannot even “get it up” for her.

The next morning, the college student arrives, banging at the door demanding his interview with Hank. Hank, who is there from the night before, allows the boy, Levon, to interview him. Levon asks quite a few questions about past relationships, hearts he has broken, etc. Charlie breaks in and gleefully shares that he has something for Hank and they need to run. They tell Levon he has to go and they are on their way out. Levon leaves but sounds like he will be coming back soon as he says that this was a great start to the interview.

When Charlie and Hank arrive at the studio, they run into Stu and he, during conversation, shares their former amazing sex life. When it is time for Hank’s meeting, he is told he won’t be selected for the writing position because after a little digging, they found out about Hank’s past. He is questioned about his motives and whether or not he can handle the job and be on time.

Later that night, Charlie is home and ready for bed. He tells Marcy that he is nervous. Marcy tells him that she is planning to hang in there with him and they need to get through it. When Marcy tries to please Charlie and he still is unable to get excited, he begins punching his own penis. Marcy finally gets him to stop and he shares that he needs to feel like a man and decides he needs to please her. While he gets to work, she plays on her iPad.

Karen and Hank meet up. She tells him that the timing was off. As they begin talking more they are interrupted by Levon. He immediately asks Karen if she is Hank’s wife. When she says she is not, he asks her more personal questions about the relationship. Clearly he has a specific story in mind. Levon asks if they are together and is pretty focused on Hank’s relationship. When Hank questions Levon’s interview tactics, he finally shares that Hank has slept with his mom and he thinks Hank may be his father. Hank pulls out a cigarette as he finishes off the first episode of a season that is likely to be wild!