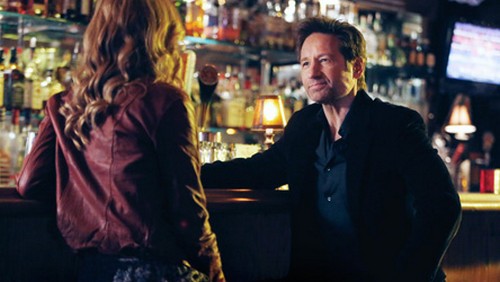 Tonight on Showtime Season 7 of CALIFORNICATION airs with its second episode called, “Julia.”  On it, Hank is aggravated by his new co-workers, and Karen gets an unexpected surprise.

On last week’s episode season 7 began with Hank eager to reunite with Karen, the love of his life, but things didn’t go as planned. Meanwhile, Hank got hired by the “Santa Monica Cop” showrunner; and a reporter asked to interview Hank for his college paper.  Did you watch last week’s episode?  We did and we recapped it right here for you.

On tonight’s episode Hank gets frustrated with his “Santa Monica Cop” coworkers on his first day in the show’s writer’s room, and he gets a surprise when he visits Levon’s apartment. Meanwhile, Charlie meets Rath’s new assistant; and Karen gets an unexpected surprise.

Tonight’s episode begins with Hank receiving a “murse” from Karen. He is very excited to carry his belongings on his first day of his new writing job in his murse. Karen is rather turned-on by the fact that Hank seems to be getting his life on track and shares how sexy she thinks he is, followed by a kiss. Just then, Marcy and Charlie come out of the bedroom after having “tried” to make things happen again, with no luck. Marcy shares, in detail, how she tried to help Charlie with his problem, and how it didn’t work at all.

Charlie and Hank head out to the studio for Hank’s first day. Charlie was tagging along to make sure Hank made it there on time with no problem. Hank fills him in on the Levon/Julia issue. Charlie takes off so Hank can get started. From the moment Hank arrives, he is not really well-liked and the feeling is mutual. He meets Terry, who is very grouch and quite manly. Hank tries to get to know her better but Terry isn’t too receptive. Levon calls Hank while he is trying to work so he tells him to stop calling. Finally, Hank agrees to go to visit Levon.

When Hank arrives at Levon’s place, he is greeted by him with a hug. Hank sees pictures of Julia, Levon’s moms, all over his house…a little too many so it is more on the creepy side. Hank comments on how hot she is. Just then, Hank is in for a surprise when Julia walks out of the room and Levon tells his “mom and dad” he wants them to talk. Hank is a little shaken, Julia is mortified, and Levon begs Hank not to leave. Hank asks Julia if Levon is his son or not. Julia, bothered by Hank’s approach, asks him to leave. He says goodbye and scoots right out.

Back at the studio, at the writer’s table, Hank is observing the banter among all the writers. When Hank is asked why he is so quiet, he is encouraged to share what is going on. At first he is put off, but then after a little encouragement, he shares the story about Levon and the writers use that as a springboard for ideas. Just then one of the writers who was promised her lunch was gluten-free discovers it was not and is covered in hives just as she begins to throw up all over everything. They all take a break and Hank is hoping to find the closest bar.

Hank meets up with Julia. She shares what happened after Hank and reassures him that he shouldn’t feel bad because she didn’t expect anything from him. When Hank asks where they go from this point, Julia replies with “nowhere.” Julia shares that despite Levon wanting them to get back together, Hank is not her type. She asks Hank to please leave them alone and that she doesn’t want him in her life.

Meanwhile, Marcy shares sex stories about her and her ex in an effort to help Charlie. He tells her how it is not helping his situation. Just then, Hank calls him to tell him that he is leaving the writing job because he cannot stand it. Charlie is screaming at him and Hank hangs up just as he sees Levon trying to get on the studio but is being manhandled by security. Hank runs up to clear things up and talks to Levon. They talk about Levon, relationships, and how much Levon really likes Hank. Hank invites him to come in with him to see him work. So apparently, he decides to give it one more try. Once they are in the studio, talking with the show’s producer, Charlie runs in happy to see Hank and playing it off so it wouldn’t be obvious why he was really there. He begins talking to Levon and when Levin doesn’t respond he heads over to see what has him preoccupied. It is a woman working and bending over. Charlie ends up getting the excitement he has been waiting for. It is so overwhelming for him he falls to the ground and 911 is called. The woman, who was sharing her backside unknowingly, came up to Hank to see if he needed anything. He touched her hair and ended up “letting go” of all his tension, right in his pants, to which everyone notices and completely gets disgusted with.

Later, Julia comes over to visit Hank and thanks him for not listening about staying out of their lives. Levon had a great day with him at the studio. Julia walks in and sees his guitar. She asks him to play and moments later, Karen arrives to see how Hank’s first day was. Hank greets her at the door, hugs her, and walks her in the house as she is still in his arms. Once he moves out of the way and shares that there is someone he wants her to meet, she sees Julia and replies only with an “Oh no.” Next week is heating up even more so remember to join us back here for a full recap!