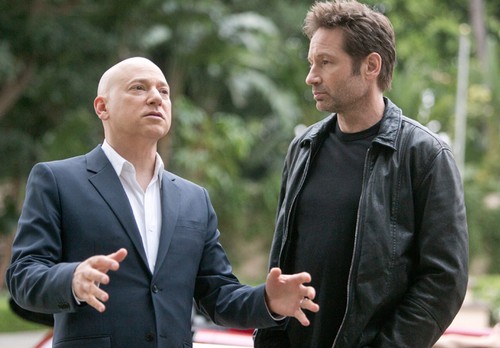 On last week’s episode while Julia was off with Rath, Hank and Levon had a night out with Karen and Marcy. But as Levon had the best night of his life with Nikki, the rest of the gang were forced to endure the company of Nikki’s creepy friend. Charlie may have gotten in over his head with his new client Goldie.  Did you watch last week’s episode?  If you missed it we have a full and detailed recap, right here for you.

On tonight’s episode It’s the ‘Santa Monica Cop’ kickoff party at Rath’s. Hank has an intimate notes session with the show’s female lead, Amy Taylor Walsh, while the male lead, Hashtag Black, has his eyes on Julia. As Charlie tries to manage Goldie, his head-case client, Stu makes him an offer. The party ends early when Levon breaks Rath’s cardinal rule.

At a table read, the star – Hashtag – rants to the writers. He tells them not to write any non-sensical cop jargon and tells them he can say a whole lot with a look. The other writers act impressed. Goldie and Hank are bored. Hank says he just crapped his pants. Rath introduces him to Hank who tells him he’s a big fan of all his wrong doings. He asks about Samurai Apocalypse and tells him that Samurai told him he heard he likes to put his dick where it doesn’t belong.

Hashtag says that Hank will be his set bitch and Hank whines about the long hours on set. Rath blows him off. Goldie tries to talk to Hashtag who blows her off with a ton of misogyny and then leaves saying he doesn’t have time for pitches from bitches. Rath tells them all there’s a kick off party at his place tonight and no f-ing in his pool.

Charlie and Hank pull up at Rath’s. Hank calls it the house that utter mediocrity built. Charlie says it makes him want to sign a TV writer. Levon and his mom Julia pull up. Levon asks Hank if they’ll see some big tits and ass that night and Julia threatens to pull down his pants and spank him in front of everyone. She sends him ahead with Charlie to talk to Hank. She asks if he’s noticed anything different about Levon and he plays dumb. She credits it to knowing his dad who is a positive role model.

She compliments the house and Hank says that it could all be hers one day since she’s been on a date with Rath. She says he was a gentleman but sounds like she wanted more. He tells her at a party like this you hope you don’t wake up with a tattoo or bloody asshole. Julia sends off Hank to get her a refill and her runs into Levon’s hooker at the bar. He asks them to keep it on the down low since Levon’s mom is there.

Hashtag shows up and pulls Hank aside. He says Rath is f-ing everything up. He says he’s looking to do 48 hours while Rath is doing The Wire. Hank says he has no control over that. Hashtag sees Julia and asks who she is – he says something gross and Hank says he’s his baby mama. Once Hashtag finds out that they’re not together, he tells him he wants to murder her ass so no other f-er can ever enjoy it.

Hashtag goes to hit on her and tells Hank to think about what he said. Rath comes over and asks what it was about. He tells him and Rath is pissed – also pissed that Hashtag is hitting on “his woman.” Rath asks if Julia said anything about him and he encourages him to be more aggressive. Levon shows up and Rath calls him Shrek then walks away. Levon tells him that Nikki is there and asks for cash so he can hit it again. Levon says he needs a release and Hank tells him to find a quiet bathroom and beat off. Levon says that now that he got laid, whacking it isn’t the same. He’s pouty and leaves.

Goldie drinks and Charlie asks if she’s sure she should be drinking. She tells him she’s no allergic to vodka but is allergic to semen. She says blowing a load on her is like throwing holy water on Linda Blair. She tells him she’s mad at Rath for letting Hashtag call her a bitch in front of everyone. She rants and calls Rath names and then Rath is there and she plays nice and hugs him. He asks Charlie if he’s poaching clients and he says no. Rath walks off and Goldie glares.

Hank heads upstairs and finds Hugh talking big to Amy about having her wear sexy outfits on the show. Hank says he has no such power and introduces himself to Amy. She takes him by the hand and pulls him away to ask him about his writing. Amy tells him she likes his work and says she doesn’t like the way Rath is writing her character. She says she talked to Rath and he blew her off. She says she’ll make it worth his while.

Stuart tells Charlie he wants to sleep with Marcy again. Charlie reminds him they’re married again and Stuart says she may be his soul mate, but she was born to be his sex partner. He starts talking about how tight she is and talks about how she let him service her orally. Charlie wants to know when this was and he says it was his last happy day. He says it was before they got remarried. He says she and Charlie must be doing it like rabbits. Stuart says he has an indecent proposal. He offers then $1 million for him to bed Marcy for as many times as they can do it in one night. He tells Charlie to think about it and you can tell he is.

Hank tells Amy that she did make it worth his while. He compliments her weed and he says her notes are kind of BS though. She says they needed a real writer on Santa Monica Cop. He says he needed a job and she says the same thing. Amy says she hates the show and it was this or a BBC show and her agent talked her into this one. She asks him to ask Rath to kill her off and says she’ll make it worth his while. Hank says his head is spinning.

She says she has another confession and she says Sasha is her bestie. He says he knows her and they had good times except for when he accidentally screwed her mom. She says Sasha told her that he gives great head. She asks what defines great head and he says you treat the vagina like a person – using the Golden Rule. She says he should show and not tell and he says she has a valid point. He asks for permission to come aboard and kneels and puts his head in her crotch.

But then Julia peeks in and Amy stops him. Amy introduces herself to Julia and then excuses herself. Hank tells her he’s sorry about that and Julia says it’s none of her business. She says Hashtag asked her to go for a ride and Hank tells her not to go – he says Rath is jealous. She says she’s not interested in Rath or Hashtag and brings up their kiss. He says she took advantage of him and Julia says he was manipulating her with complimens about her being a great mother.

Hank asks Julia when she wants to kiss again and she reminds him he just had his face in Amy’s crotch. She asks why he did it and he says she heard that he gave good head. She says he does. He says there’s only one way to diffuse this situation and throws her on the bed and tickles her. She squeals and screams and then Rath and Hashtag come in. She tells Hashtag she’s not interested at all. She also tells Rath that she’s glad to have the job but won’t take it with strings attached. Julia walks out.

Hashtag tells Rath to fire him and Rath tells him he decides who to hire and fire but then turns on Hank and asks what the hell. He tells him that he knows he likes Julia and Hank insists it was just a harmless tickle thing. Before it can escalate, Hugh comes in and tells Rath that people are f-ing in his pool. Rath shouts motherf—ers and storms out to take care of this.

It’s Levon in the pool going to town with Nikki. Rath comes out yelling and Julia is mad too. Stuart tells Nikki that she’s there with him and she says she was just making some side money. Levon says he has no money and that Hank will pay for it. Hank says he told him no. Julia is appalled that he lost his virginity to a hooker and he says he loves Nikki. Nikki tells them that guys fall in love with her all the time. Levon tells Julia that Hank got him the hooker and Julia is furious. She slaps him in the face and she stomps off with Levon. Hank tells her he’s sorry and he thought he was doing the right thing.

Goldie chews out Rath and tells him he’s running a sinking ship. She says she’s going to take it out from under him. She calls Rath a pussy and asks him if that suit came with tampons. Hashtag starts laughing and tells her she’s funny. She throws something at Hashtag and says he can’t call her a bitch. Hashtag says all he meant was that women talk too much. Charlie agrees and he and Hashtag high five over it. Goldie takes a swipe at Charlie and says he’s fired then throws up in Rath’s pool.

Charlie and Hank leave and he asks how he can be in love with a girl he’s not even dating. Charlie starts crying and tells Hank he’s totally broke and doesn’t even know how he’ll pay the rent next month. Hank says his next paycheck has to go to paying his son’s new hooker habit. They both agree that they are royally f-ed and not even with lube. Hank tells him they’ve been f-ed before and will be fine because that’s the kind of happy go lucky sluts they are. They drive away.