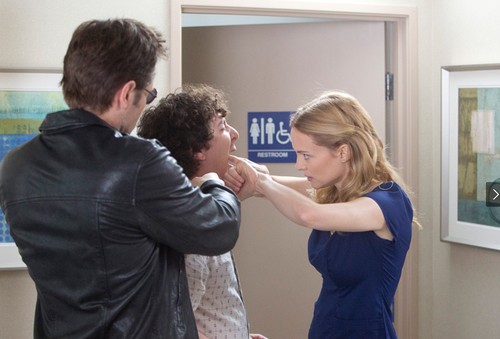 Tonight on Showtime Season 7 of CALIFORNICATION airs with its seventh episode called, “Smile.” On this evening’s episode, Rath wants a rewrite of Hank’s script.  Julia’s new boss gives her some career advice and Charlie and Marcy consider Stu’s offer, until Atticus’ butler offers an alternative solution to their money problems.

On last week’s episode it was the ‘Santa Monica Cop’ kickoff party at Rath’s. Hank had an intimate notes session with the show’s female lead, Amy Taylor Walsh, while the male lead, Hashtag Black, had his eyes on Julia. As Charlie tried to manage Goldie, his head-case client, Stu makes him an offer. The party ended early when Levon broke Rath’s cardinal rule.  Did you watch last week’s episode? If you missed it we have a full and detailed recap, right here for you.

On tonight’s episode Rath demands a rewrite of Hank’s “Santa Monica Cop” script. Meanwhile, Julia’s new boss gives her some career advice, but Levon and Hank have other ideas; and Charlie and Marcy consider Stu’s offer, until Atticus’ butler offers an alternative solution to their money problems.

Rath demands a rewrite of Hank’s “Santa Monica Cop” script. Meanwhile, Julia’s new boss gives her some career advice, but Levon and Hank have other ideas; and Charlie and Marcy consider Stu’s offer, until Atticus’ butler offers an alternative solution to their money problems.

Tonight’s episode begins with Hank walking in on Karen and her male friend from yoga class. He has her in a bit of a compromising position and Hank isn’t too happy to see him again. When Karen is angry about him barging in and making accusations, she tells him to go. He proudly shares how she was right and Julia was really angry about the hooker he bought for Levon. Karen isn’t fazed. Hank gives her the check he brought her as a gesture now that he is working regularly, but Karen thinks he is only giving it to her to buy her forgiveness and tears it up. Karen’s friend tells Hank that he is rude and Hank replies with some words of his own. Yoga guy gets pushy and Hank responds with a kick, to which yoga man responds with a punch. Hank ends the scuffle by throwing a drink at Karen’s friend.

At the writer’s table, Hank arrives with a red face wondering where Rath and Levon are. Hank is told that Levon called in sick, and they say that Rath is upset about something buried in his office. Moments later, Rath comes out and shares some bad news…Julia has pulled out and they don’t have time to recast so the writer’s will be working overtime. Hank goes to see Julia but she doesn’t seem as though she’ll be changing her mind. Because he interrupts her at work, her boss comes in and pulls Hank aside. When he complains about Hank’s involvement in Julia’s life, Hank calls it and tells him he must be after Julia. After attempting to deny the allegation, he finally admits that he, too, is in love with Julia.

Charlie tries his luck on a new client with a possible book deal. He has the memoir of a rock and roll butler in his hands if he can work the deal. Meanwhile, Hank goes to see Levon and he shares that his mom doesn’t want to be involved in the industry and doesn’t want him either. Levon tells Hank he wants to move in with him as the two smog from a bong together.

Marcy comes to see Stu, who is laying outside in a speedo. Marcy asks what is going on with the hookers, and Stu responds that he refuses to get into another relationship because he only wants her and no one else is as good as her. When Stu asks why she is there, she admits she was going to ask for a loan. When Stu replies that he doesn’t believe in loaning money, he does offer to pay Marcy 1 million to sleep with him just once. He tells her he is so desperate for her again that he is willing to pay a high price. When she refuses he asks how much would it be just to smell her so he can go pleasure himself. Ick…no wonder she stormed off, leaving him screaming for her in his awkward body and little red speedos.

Hank makes Levon pretend to have a toothache to get in to see Julia. When they arrive, Julia questions Levon and he folds and shares everything. When Julia starts complaining about the fact that all men are just interested in one thing, Hank tells her to get used to it. He tells her that everyone wants her, including her boss. Just as she shares her disbelief her boss proposes to give her a better life and provide for her as he is down on one knee. He says all the wrong things as far as protective Levon is concerned and the dentist ends up getting kicked by Levon. Hank gets in his second fight of the day and punches the dentist after he says some unkind words about his son. Two father and son high-five each other as Julia looks on with her mouth wide open, wondering what just happened.

Marcy comes home and finds Charlie talking with his new client about the pages of notes he has about his former rock-and-roll bosses. She pulls Charlie aside and tells him about Stu’s offer. Charlie already knew because Stu approached him with the same idea. When Marcy wonders why Charlie didn’t tell her he explains that is was such a hideous request, he didn’t even consider it. He is surprised and upset that she is considering sleeping with her creepy ex. When Marcy breaks down the fact that she’s already slept with Stu thousands of time, and how it would mean nothing to her except a big payday, Charlie begins to consider the idea…Charlie ALSO begins to get excited over the whole thing and Marcy pulls him on top of her to take advantage of the rare moment.

Hank takes Levon back to the studio with him and Levon apologizes for having sex in Rath’s pool and for not showing up. He tells him he needed some “me” time. Rath is understanding and forgiving. Levon thanks him. Later, Julia, Levon, and Hank watch TV together. After Levon takes off to bed, Julia admits she may be having feelings for Hank again. Julia wants him to stay the night. The two being playfully laughing and teasing each other on the couch. Hank lays on top of Julia and they start kissing.

Wow! It is heating up now!! Next week will be even better with lots more to come on the Julia-Hank relationship.