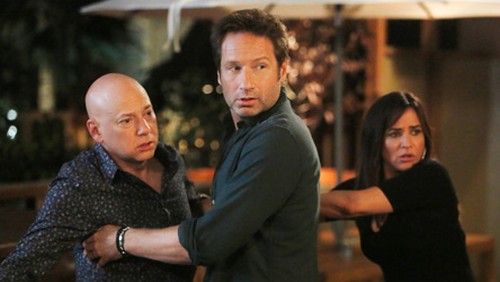 Tonight on Showtime Season 7 of CALIFORNICATION airs with its tenth episode called, “Dinner With Friends.” On this evening’s episode, Hank entices Karen into dinner, but Julia interrupts their romantic evening. Later, Charlie, Marcy, Krull, and Levon bring even more drama to the table.

On last week’s episode Hank flashed back to his turbulent times with Karen and a confused young Becca – and their days with a happier Charlie and Marcy. A run-in with a nun, however, helped him to put things into perspective. Did you watch last week’s episode? If you missed it we have a full and detailed recap, right here for you.

On tonight’s episode Hank entices Karen into dinner, but Julia interrupts their romantic evening. Later, Charlie, Marcy, Krull, and Levon bring even more drama to the table. Rath shows up with Eddie Nero, who’s in “research mode” for an appearance on ‘Santa Monica Cop.’ And Stu’s assault on Charlie’s manhood sends the night into chaos.

Tonight’s episode looks like it is going to be great and you won’t want to miss it, so be sure to tune in for our coverage of Showtime’s Californication at 9:30 PM EST! While you wait for our recap hit the comments and enjoy the sneak peek preview of tonight’s episode below.

Tonight’s episode begins with Hank showing up at Karen’s happy to check on her knowing she is feeling better from her accident. Hank begins to beg Karen to go to dinner with him. She keeps trying to put him off, but as he keeps trying to entice her by making the offer a little sweeter, her dinner burns and she has no choice but to join him. Hank takes her to his place (well, Charlie and Marcy’s), has the wine ready to go, and a quaint dinner for two.

Hank is laying it on thick trying to win back Karen’s love. Karen refutes his attempts by telling him, “We don’t work.” Hank doesn’t take no for an answer and sits to enjoy dinner with her. As they sit by candlelight, they hear a knock at the door. It is Julia. Julia seems a bit confused as it obviously seems like a cozy dinner for two, but when Karen welcomes her in and asks her to join them. The two sit, eat, and talk away while Hank is completely ignored.

After dinner, Karen and Julia sit to chat some more when Marcy and Charlie arrive home and Marcy is super upset that all of their credit cards were declined at dinner. Marcy begins talking about the Stan proposal again. All the ladies begin talking about Stan’s penis, then Hank’s, and even Charlie chimes in. Charlie’s client Krull stops by and makes himself comfortable. The busy home then hosts Levon and his prostitute girlfriend (for the night) Ming that he brought back for some action. She happens to know Krull and talks about some of their previous encounters.

An old friend, Eddie, comes by with Rath to discuss a movie idea he has. He looks around the room and comments on all the lovely women there when he notices Ming and quickly remembers her from Sunset Blvd. She remembers him too, but the memories weren’t so great as she recalls how he “pooped” on her. As if there weren’t enough people already there, Stan shows up, with a briefcase filled with the money he’s promised if he gets the chance to sleep with her. Stan begins describing, in detail, what sex was like between them and asks if she remembers….she says she does. She is very tempted upon seeing the money, which is only a 10% deposit of what Marcy would get.

When Charlie gets fed up with Stan disrespecting him, he hits him with Eddie’s baton and Stan cries out in pain. Charlie tells him to stop disrespecting him in his own home, but Stan gets him again by saying “clearly this is a rental.” The two begin fighting (if you’d call it that) and Charlie grabs Stan where it hurts most. As everyone finally calms down, Ming comes rushing in, takes Eddie’s gun, and tells everyone to empty their pockets. When Eddie rolls after her he gets close to knocking her down but she turns and pushes his wheelchair full-force knocking him off the balcony. She then takes off with Stan’s money.

Karen and hanks share a nice moment as they reminisce. After a trip down memory lane, she tells him she loves him, but she cannot be with him. She tells him he is impossible to live with based on the way he lives his life…which is also the thing that makes him attractive. Having gone through everything they have, Karen can get over his attractiveness since she knows all that comes with it.

Only two episodes left, so be sure to meet us here next week for another recap as the season winds down!